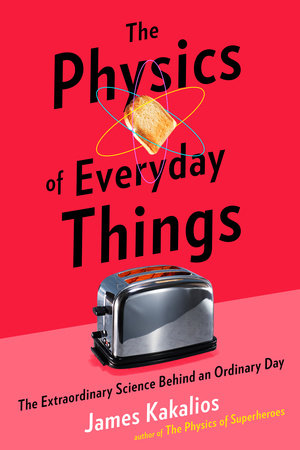 In concept, The Physics of Everyday Things sounds wonderful: an accomplished scientist and author of The Physics of Superheroes explains the science behind the technologies people use every day, from toasters to credit cards.

The book is organized around an anonymous character’s (“your,” since these sections are written in the second person) daily routine, including a visit to the doctor, an airplane flight, and a business presentation. This compact volume contains enormous amounts of information about a gamut of devices: household appliances, navigation systems, transportation, medical imaging, and many more.

That most of us have no idea how such things work isn’t as surprising as it might seem. The recent book The Knowledge Illusion: Why We Never Think Alone, by Steven Sloman and Philip Fernbach, argues such ignorance might even be essential to progress. (As Elizabeth Kolbert wrote in her review: “If everyone had insisted on, say, mastering the principles of metalworking before picking up a knife, the Bronze Age wouldn’t have amounted to much.”)

Yet a better understanding of the physics behind these technologies has myriad benefits, from being able to answer your kids’ questions to appreciating why the government funds scientific research.

It’s too bad, then, that this book fails to achieve its objective. The biggest reason is that it is not written in what I’d consider plain language. Indeed, much of the text reads as if it could have come from a technical manual. Here, a typical example, is the beginning of the section on the physics behind digital photography:

“Two important steps are needed in order to photograph the image of the clouds using your phone: the recording of incident photons via quantities of electric charge that remains localized at the positions where the photons are absorbed; and, once the photo has been taken, measuring how much electric charge sits at every position in the image. The first step is accomplished with a light-emitting diode run backward — that is, a light-absorbing diode, otherwise known as a solar cell or ‘photodiode.’ The second step involves arrays of capacitors that store the charge at each pixel.”

In fairness, the next paragraphs cover some of these terms — photodiodes and pixels, for example — in more detail. But the prose becomes no more lucid. I have a Ph.D. in a science field (albeit not physics) and could spend the afternoon parsing this section without any guarantee of full comprehension.

The problem is exacerbated by the lack of illustrations. The book contains a mere eight figures, apparently drawn by hand. One of them is a sketch of a flying car with downward-pointing arrows near the “wheels,” an indication that visuals weren’t taken seriously.

Given the subject matter, relying so heavily on text alone is a recipe for difficulty in understanding. The Physics of Everyday Things might have worked better as a coffee-table volume full of large color graphics. Or, for that matter, a series of YouTube videos.

The book’s organization also hurts. Framing the information around “your” day adds little and comes with downsides. Devices using similar underlying technologies are sometimes mentioned in separate sections. For example, the EZ-Pass system and hotel-room keycards operate on many of the same principles, but appear more than 140 pages apart. This increases repetition and, given the turgid nature of the explanations, makes the reader’s job more difficult. Had the book been organized according to devices utilizing similar technologies, perhaps tracing some of the history and thinking behind key innovations, it would have been more effective.

And on and on.

I found myself wondering about stupid things like: Did “you” go back to the doctor for that cortisone shot? Did it help “your” ankle? What in the world do “you” do for a living, anyway?

It’s painful to pan a book by a scientist trying to communicate to the broader public. The Physics of Everyday Things is well-intentioned, and the ubiquity of physics in our technologically driven lives comes through loud and clear.

Even without absorbing the details, I was astounded again and again by the sophistication of many devices we take for granted. I don’t feel any smarter about the physics behind those devices, but the reminder itself is not without value.