Set in the most mind-controlled state on the planet, this wildly inventive novel examines the enigmas of narrative and identity. 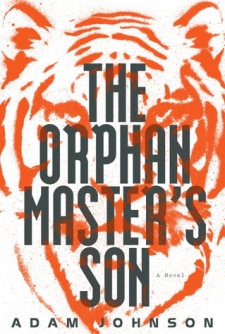 We
are all a product of some kind of brainwashing. The Japanese don’t like the
taste of lamb, but think nothing of eating whale meat. Their Korean neighbors
eat dog, which they think increases virility and staves off the cold. The
French eat frog legs and snails while just across the Channel the British slather
a dark, sticky spread of yeast extract on toast. Some women feel safer hidden
under a tent-like garment with only a slit for their eyes, while others
surgically alter their breasts and wear clothes to show them to best effect. Governments
harness these cultural beliefs to further their own agendas: the American trope
of freedom and self-expression, the Chinese emphasis on conformity and
hierarchy, the African tribal ethos of community living. But perhaps the most
zealous and intrusive practitioner of citizen indoctrination is the country of
North Korea. The only communist dynasty in history survives not because of a
grateful populace whose every need is met, but because the Kims (Il Sung, the
recently deceased Jong Il, and if everything goes as planned, Jong Un) have
devised a diabolically effective system of complete isolation and control.

Woven to the warp and weft of the brutal realities of the most mind-controlled state on the planet, Adam Johnson delivers a literary tour-de-force in The Orphan Master’s Son, a wildly inventive mashup of the thriller, picaresque novel, gulag memoir, love story, ugly-duckling-into-beautiful-swan fairy tale and mythical heroic journey. Packed with the weird details of life in North Korea, the intricate plot follows the main character as he rises and falls several times, changes identities, experiences the depredations of daily survival in a prison camp, scales the heights of pampered yangban (elite) life, descends to the deepest bunkers of Kim Jong Il, and endures the atrocities of the interrogation chambers.

The author, who has traveled to North Korea, includes many of the bizarre highlights of the hermit kingdom: Kim Jong Il’s speed battle haircut and jumpsuits, Vinalon, Arirang gymnasts, and the cinematic arts. The darker, less kitschy aspects of government-sponsored drug running and abductions, the fear and mistrust of sharing non-sanctioned thoughts even with family members, and the oligarchs who live in comparative splendor while the rest of the starving citizens scrounge for food are presented as well. Stitched together, these details, which are more fantastic than anything thought up by Orwell, make for a compelling background on which to build a novel.

The story is told from three different viewpoints, much as if to say that all stories are propaganda, whether you read them in the newspaper, hear them from a government loudspeaker or enjoy them in literary novel form. There is the omniscient, presumably trustworthy narrator who relates most of the story. The state’s version is broadcast through the loudspeakers that are hardwired to every North Korean’s home to emit a constant stream of announcements and news. Finally, a nameless interrogator narrates in first person as he tries to pry the real story from the main character. It is a complex nesting of tales. As the reader is asked at the very beginning of the book, “What are you going to believe, citizens? Rumors and lies, or your very own eyes?”

The not-yet-a-hero is first introduced as Pak Jun Do, named after a Grand Martyr of the Revolution who hung himself to prove his loyalty to the regime. Though actually the son of an orphan master, everyone he meets assumes he is an orphan, the lowest of the low in a society where family ties are the predominant signifier of one’s place. In North Korea, he is told, “the story is more important than the person. If a man and his story are in conflict, it is the man who must change.” And so he does.

Recruited to kidnap Japanese citizens, he is then promoted to eavesdrop on radio transmissions while stationed aboard a boat that illegally fishes outside of North Korean waters. During these assignments, he twice passes up the opportunity to defect. Because citizens must either spin the facts of life’s unexpected occurrences to fit the state’s requirements or get sent to prison camp, Jun Do eventually places himself in the jaws of a shark to add substance to a lie the crew has concocted to explain the defection of a crewmate. Just before he puts his arm in the shark’s mouth, he says, ‘“I know I thought it up, but this isn’t a story that anyone could believe.”

His fictions are rewarded with a top-secret trip to Texas for “the talks before the talk,” the outcome of which lands him in a prison camp. By this time, our hero-to-be realizes that despite hard work and complete loyalty, his superiors inevitably suffer horrible, bloody fates. He boldly adopts the identity of the most brutal man in a brutal regime, the only man to take something beloved from Kim Jong Il. That something is a woman named Sun Moon, who has a story very similar to the mother that he never knew, and Sun Moon is the one who leads our hero to his final destiny.

According to Adam Johnson, the genesis of the novel was a short story titled “The Best North Korean Short Story of 2005.” This luminously written book is not the Great North Korean Novel, but rather the Great American Novel, affirming individualism, struggle against repression and the right to shape one’s own destiny. Instead of the martyrdom for the nation that was the fate of the hero’s original namesake, he martyrs himself for the woman he loves. It is an ending that only Kim Jong Il and his yangban could hate.

From editorial assistant to copy editor to freelance travel writer, Alice Stephens has had a long and varied career working with the written word. She has recently completed a historical novel set in Nagasaki, Japan.

Obsession threads throughout this debut novel centered on the doomed Terra Nova Expedition.

The Invention of Wings

Haunted by slavery, two unforgettable American women form a complex relationship as each strives to make a life of her own in this lyrical and edifying tale.