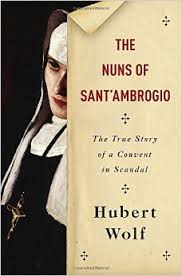 In 1998, Pope John Paul II opened the top-secret archives of the Congregation for the Doctrine of the Faith in Rome, thereby making the files of the Holy Roman Inquisition — the branch of the Vatican responsible for investigating serious crimes against the faith — accessible to researchers for the first time.

A year later, when Hubert Wolf, a German Roman Catholic priest and professor of ecclesiastical history at the University of Muenster, unearthed some shocking documents that had been buried in those archives for almost a century and a half, he must have known he had discovered the find of his professional lifetime.

The materials revealed a scandal that had been covered up so as to safeguard the reputation of the church and of several key members of the Vatican hierarchy at the time. It was a seamy little mess: a renegade convent; illicit sex, including lesbian (though the church, in one of the more inadvertently funny details in this very detailed history, was initially not quite sure what kind of sex that was and, thus, if it qualified as a sin); sodomy; French kissing, which was a definitely a sin, forbidden even to married couples; fake letters from the Virgin Mary; and credulous priests falling under the spell of a conniving novice who used “the language of the ecstatic body” to manipulate the women around her while routinely visiting heaven for one-on-one talks with Mary, who generously helped her plot her takeover of the convent.

The result is The Nuns of Sant’Ambrogio: The True Story of a Convent in Scandal. The story begins in 1858, when Princess Katharina von Hohenzollern-Sigmaringen, a German aristocrat wishing to be a nun, enters the convent of Sant’Ambrogio in Rome. She quickly discovers that it is under the cultish thrall of the beautiful young novice mistress, Maria Luisa, and that all kinds of unspiritual things are going on.

When the princess confronts Maria Luisa with her concerns, the mistress begins a bizarre plan to kill the princess by poisoning her (she had gotten practice poisoning at least three other nuns). The princess eventually escapes and brings the situation to the attention of Vatican authorities, launching the elaborate inquisition process that is the focus of the book.

It is a deeply strange book, its tiny, hermetic core narrative thrown into relief by events outside the convent walls. As Wolf explains, the scandal takes place in the midst of a period of profound turmoil in the Catholic Church: a “crisis of modernism.” On one side were the "liberals" trying to acclimate the church to the modern world of post-Napoleonic secularization, not to mention the political unification of Italy and the revolutions of 1848. Opposing them was the Jesuit-led "retreat into even stricter dogma," which would lead, ultimately, to such doctrines as papal infallibility.

In such chaotic times, a reactionary fad for supernatural phenomena took hold, reinforcing awed belief in Maria Luisa’s letters from the Virgin, which, in turn, strengthened her growing reputation as some kind of ecstatic saint who used sex as a mystical tool. Maria Luisa’s was a plan worthy of Machiavelli. Wolf sets the rationale out well, though one might disagree with his final sentences:

The case of Sant’Ambrogio, according to Wolf, “acted as a catalyst for political and theological polarization within the Roman milieu.” The dysfunction in the convent revealed a failure of the system: The male figures with ultimate responsibility for the women behind its walls either indulged in forbidden sexual practices (while rationalizing them as religious rites) or turned a blind eye to those who did. Some of the culpable men — clerics — were minimally punished; the most important ones were protected and avoided the type of penalties that would have drawn attention to the scandal.

And the nuns? The real story is of the intersection of mid-19th-century women and faith, their ambition and devotion, sexuality, and class and gender prejudice in an implacably male-dominated church hierarchy. Maria Luisa was gaming the system the only way she could. In many ways, given her poor, uneducated background, she was rather amazing. She could have been a Joan of Arc in a different context. She ended her life “mentally and physically broken.”

What will strike a 21st-century reader is how seriously crazy everyone was. Wolf doesn’t help his analysis when he describes supernatural visitations as if, in general, they might actually happen. Perhaps, as a priest, he simply believes in them. A modern secular reader, however, will want a more detailed and impartial analysis of such phenomena.

Essentially, The Nuns of Sant’Ambrogio is a meticulously researched church history, the kind of book that, if it did not have such bizarre sex at its core, would be relegated to a shelf with other barely read histories. It is slow reading, its numbing detail often falling into the old theological trope: How many angels can dance on the head of a pin?

It would have benefited from an editor to trim it and let the primary story come forward more clearly. There is also an over-use of clichés and flippant rhetorical questions (“Was [Maria Luisa] a true or a false mystic? Or could this even be the work of the devil?”), both possibly an attempt to make the book more commercially accessible. There is a minimal index for such a scholarly work.

Nevertheless, The Nuns of Sant’Ambrogio will take its place alongside such classics, as noted by Le Monde, as de Sade’s Juliette and Diderot’s Le Religieuse. Sadly, the modern reader can’t help but think of the more recent sexual scandals involving pedophile priests and wonder if such creepy practices and ensuing cover-ups are nothing new in the Roman Catholic Church.

Kate Buford’s award-winning Native American Son: The Life and Sporting Legend of Jim Thorpe was an Editors’ Choice of the New York Times. Burt Lancaster: An American Life was named one of the best books of 2000 by the New York Times and other publications. Buford has written for the New York Times, Film Comment, Bluegrass Unlimited, History Now, Readex, among other publications, and was a commentator on NPR’s Morning Edition and APM’s Marketplace from 1995-2004. She serves on the boards of Biographers International Organization and of Union Settlement Association in East Harlem, New York.

The Age of the Horse: An Equine Journey Through Human History