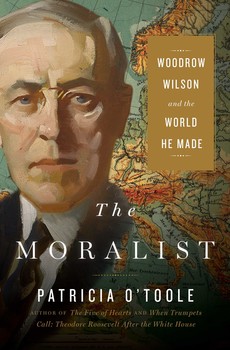 The title of Patricia O’Toole’s new book is a twofold puzzle. In what sense does she consider Wilson a “moralist”? It is a word with multiple shades of meaning, not all positive. And what exactly is the world that Woodrow Wilson made? Whatever O’Toole’s intent, there is a note of irony.

O’Toole’s work follows two other relatively recent major biographies of our 28th president: A. Scott Berg’s Wilson and John Milton Cooper’s Woodrow Wilson. But she takes a somewhat different tack. For one, this is not a straight biography, and although there is sufficient personal detail to provide context, the focus is on Wilson’s engagement with the world. O’Toole also appears to be less admiring of Wilson than are Berg and Cooper.

This is not to say that O’Toole overlooks Wilson’s achievements. He overcame probable dyslexia to become the most highly educated president in U.S. history. He was a loving son, husband, and father. He was a hugely popular professor, then college president, at Princeton.

His run for president in 1912 was motivated by a sincere desire to root out corruption in American society and improve the lot of the average American — a desire that came to fruition with the passage of his progressive New Freedom reforms. He was also a visionary warning that a “vengeful peace” at the end of World War I would simply lay the groundwork for another world war.

Yet, early on, there were signs of trouble. Reflecting that, prior to his presidency, Wilson had seldom known failure (in particular, he won both the governorship of New Jersey and the presidency of the United States on the first try), O’Toole notes: “Success is a poor teacher. It discourages analysis and self-examination, and it tempts the successful to overestimate their abilities.”

Already disinclined to reach out to or take counsel from others, Wilson would become his own worst enemy as his presidency progressed.

This self-defeating tendency directly relates to the question of what kind of “moralist” Wilson was. The answer appears to be a somewhat situational one. While there is no doubt he was sincere in his pursuit of the greater good both at home and abroad, achievement of his aims frequently entailed some kind of shameful compromise.

To wit: The quid pro quo for the New Freedom reforms was the effective re-segregation of parts of the U.S. government (this after Wilson promised African-American voters “absolute fair dealing” during the election of 1912).

“Making the world safe for democracy” (U.S. participation in World War I) was linked with an ugly wave of vigilante justice and an unprecedented rollback of constitutional rights at home. Wilson would make further such deals with the devil as he pursued his most cherished goal after the war: a League of Nations.

Not surprisingly, O’Toole devotes a great many pages to the league, arguably Wilson’s signature achievement. The need for a “general association of nations” was one of Wilson’s Fourteen Points, the principles for peace that he proposed as a basis for the Paris Peace Conference of 1919.

Such was Wilson’s investment in this concept that he insisted on personally representing the U.S. at the conference — in the course of which he tossed or watered down 13 of his points for the sake of drumming up support for the league.

He also refused to countenance insertion of language on racial equality into the league’s covenant for fear that the controversy might sink the league. Meanwhile, as Wilson spent months waging peace in Paris, the U.S. was sinking into a morass of race riots, rampant unemployment, and runaway inflation.

In spite of his efforts, Wilson failed to sell his own country on the league. He refused to work with the senators who would have to ratify the peace treaty and wouldn’t agree to minor changes that could have saved the league provisions.

He destroyed what remained of his precarious health on an ill-conceived tour of the country to get the American people on his side. With Wilson felled by a stroke, support for the league sputtered out; the rest, as they say, is history.

This brings us back to what kind of world Woodrow Wilson made. In spite of O’Toole’s title, she does not completely answer the question. True, Senator J. William Fulbright once described the league as “the one great new idea of the century in the field of international relations.”

And, although the league failed in its original form, it found rebirth in the founding of the United Nations at the end of World War II — but only after the most hellish war in history brought humanity to its senses.

Such institutions are an immutable part of today’s international system, but it is a stretch to credit Wilson — as O’Toole seems to — with the fact that our world is more democratic than his was. After all, there are a few others — for example, the troops who stormed Normandy and the people of Eastern Europe who rose up against dictatorship in 1989 — who also deserve a bit of the credit.

In the end, the real takeaway from O’Toole’s book seems to be that the true nature of Wilson’s heritage has never been resolved. Trying to do so could keep Wilson scholars busy well into our current century.