The Monster’s Bones: The Discovery of T. Rex and How It Shook Our World

The rip-roaring race to put dinosaurs on display. 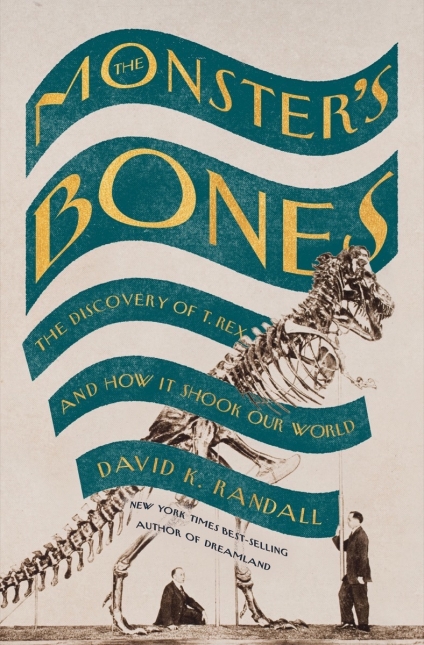 Charles Darwin’s theory of evolution may have sparked a maelstrom of religious and scientific controversy, but it also ignited a furious quest among prestige cultural institutions for dinosaur fossils. The Monster’s Bones offers a vivid, propulsive account of this late-19th-century phenomenon.

There was frenetic competition — institutional, interpersonal, and often cutthroat — not only in the gritty wastelands of the American West but also in the boardrooms of upstart Gilded Age museums. Its principals: stiff-collared museum directors, a raft of self-styled authorities in the new science of paleontology, and several notable robber barons, not to mention a scattering of intrepid fossil hunters.

Author David K. Randall centers his sprawling narrative on the long career of one remarkable outdoorsman modestly educated, transplanted from Kansas, and, for most of his life, in the employ of New York’s newly chartered American Museum of Natural History: Barnum Brown. His first name tells its own story about the bottom-up “populist” influences driving the competition for fossils even among stately institutions. Museum honchos saw an enticing prototype in the great showman’s largely fraudulent and over-hyped but enormously profitable exhibits of natural “wonders” that would draw paying visitors by the tens of thousands from all social classes.

The museums imagined comparable public enthusiasm — and income streams — in creating their own emporia of the remarkable, far more authentic but no less spectacular than P.T. Barnum’s. They envisaged featuring full-size skeletons of prehistoric behemoths reconstituted from fossilized bones unearthed in the wild. This promotional impulse, as much as scientific zeal, inspired them to mount expeditions into the backcountry to search for and excavate these trophies, often at great expense.

Barnum Brown was the best of the fossil hunters. An instinctive expert in the underlying science and a solitary type entirely at home in the vast, empty spaces beyond the Mississippi, he had an uncanny ability to predict where, encased in layers of rock, bones might lie. He often rode out alone for weeks at a time. And he almost always delivered in a big way. Among his most notable finds: the first nearly complete skeleton of a Tyrannosaurus Rex. Once assembled, the 15-foot-tall monster drew droves of titillated New Yorkers.

Brown’s T. Rex made the kind of splash museum brass had dreamed about. It was an expensive triumph, though, given the price tag of several months’ exploration, painstaking excavation, carting of the bones by multiple wagons to a railroad transit point, and then final prep and assembly in an exhibit hall. All in all, the process could take years.

Few if any museums could sustain the cost of mounting such an exhibit. And here’s where the robber barons — or, in Randall’s felicitous coinage, “gilded tycoons” — come in. Seduced by the prospect of widespread public acclaim, several took the philanthropic bait. Andrew Carnegie, Marshall Field, and J.P. Morgan each underwrote “Bone Wars” forays by prestigious institutions, notably the Field Museum in Chicago, New York’s American Museum of Natural History, and the Carnegie Museum in Pittsburgh. Morgan, John D. Rockefeller, and a consortium of other worthies were all trustees of the Gotham institute.

Against this backdrop, Randall sets his compelling account of the life and career of Brown, who died two weeks shy of his 90th birthday. It makes for a fascinating saga: We follow Brown through myriad solitary adventures out West, cross-border in Canada, and on one occasion, deep into South America. Grabbing a steamer for Patagonia on a single day’s notice, he eventually set out on a collecting trip that would alter his remaining days.

The very first segment of the expedition, a trek across the southern tip of Chile to the Andes, came up empty, and his fellow searchers simply gave up and sailed home. But not Barnum Brown. He stayed on alone, successfully excavating an “impressive haul” of fossils, some still exhibited in Manhattan. He also survived encounters with a mountain lion, rogue tides, seasickness, and quicksand, and a shipwreck on a deserted island.

Once ready to leave, he found no New York-bound ships scheduled for four months and so decided to travel via Europe. After a long sojourn on the Continent, Brown finally came home sporting an entirely new wardrobe, a Van Dyke beard, and a determination to propose to his longtime sweetheart. (She accepted.) Thereafter, he donned a full-length fur coat on all his prospecting forays, presumably even the down-and-dirty ones.

As stories go, Barnum Brown’s is a doozy, and David K. Randall handles it masterfully and serves up the historical context in spades.

Bob Duffy is a Maryland author and retired advertising consultant.