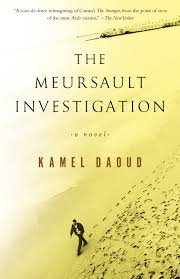 So begins The Meursault Investigation, echoing the first line of Albert Camus’ existential classic, The Stranger, and preparing the reader for a story that reacts to — or interacts with — its timeless predecessor.

In fact, Kamel Daoud’s novel is an ekphrastic response to Camus’ masterpiece — a dialogue of sorts with the original; a tribute, or, more likely, a rebuke. In essence, it is all and none of these, for it is a work that stands on its own while at the same time alluding both subtly and overtly to the original.

And it makes the reader ask a very basic question of both works: Who is the stranger? Is it Meursault, the French-Algerian protagonist in Camus’ novel? Is it the anonymous Arab murdered in a country where French colonialists rule and the indigenous live in the shadows of their native land?

Or is it Harun, Daoud’s Algerian antihero, who spends his time in bars speaking to an unidentified individual, narrating the story of his brother — the very person killed by Meursault — and who, we come to learn, is estranged from his own countrymen?

On one hand, Daoud does what Camus did not: provide an identity to the murdered Arab whom we know nothing about in The Stranger (a masterful stroke on the part of Camus, who was interested in exploring the meaninglessness of existence). In Daoud’s tale, the Arab has a name — Musa — and a persona, as his brother narrates the details of the man who was accidentally murdered by Camus’ Meursault.

Through the conception of Musa’s existence — a real flesh-and-blood individual here — we witness life in colonial Algeria through the eyes of the colonized: the shantytowns vs. the luxurious villas, the underclass vs. the privileged.

On another level, however, Daoud continues the theme of alienation, picking up where Camus left off. Like Meursault, Harun is alienated from his mother, though his is a much bitterer bond compared to Meursault’s indifferent filial relationship. And like Meursault, Harun allows those around him to control his destiny rather than grappling with it head-on.

The two works are bound together as much by character and setting as by the themes of anonymity and alienation. In Camus, we have the hero alienated from those around him, a man born and raised in a foreign land where he is, nonetheless, a foreigner himself.

In Daoud, on the other hand, we have a native Algerian at odds with the very people he hails from, a strange consequence of a bitterly fought war for independence. It is this sense of estrangement, which begins under French rule and continues after liberation, that dominates The Meursault Investigation.

And then there is the otherness: the confrontation between two cultures which brush up against each other but never quite meet. For the shapeless Arab in Camus’ work — whose presence is almost nonexistent in The Stranger — tells us much about colonialist perceptions of the colonized: people who are marginalized, who are there but unseen until they suddenly appear, unwanted, on the landscape, provoking fear and suspicion.

Similarly, in Daoud’s novel, we have the unnamed companion at the bar to whom Harun tells his story. Yet we never see clearly who he is, though we assume he’s a Frenchman, for Harun constantly badgers him with the term “your hero.”

Camus’ use of language in The Stranger is minimalist — short, curt sentences that mimic Meursault’s noncommittal nature. Daoud’s language, on the other hand, is filled with longer passages and lush descriptions of the environment, perhaps signaling a deeper connection between Harun and his surroundings, an interesting use of irony considering his separateness from his own people.

The Meursault Investigation is a superb tale, deftly conceived and executed. You’ll want to reread The Stranger once you have finished it.

Empress of the Night: A Novel of Catherine the Great

An illuminating account of how an obscure German princess came to rule Russia.