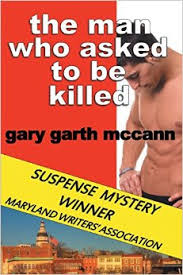 Buddy Smith, a 28-year-old Annapolis lawyer, works for his cousin Mac, who just happens to be the governor of Maryland. Buddy doesn’t work a state government job; he serves as legal counsel to the trust that holds Mac’s business interests.

The governor’s older sister, Thea, runs the highly successful corporation GBC, in which Mac remains a silent partner. It had been built by their late father. When Thea is murdered, Mac is not only rocked with grief, but also seems to feel that he and those around him are in danger. Why he feels this way is not made clear until one quarter through the book.

Until then, author Gary Garth McCann, in The Man Who Asked To Be Killed, provides a detailed history of Buddy’s life, including his lifelong crush on Mac’s second wife, the beautiful but emotionally fragile Kat. Hey, but wait a minute. Buddy is engaged to marry Lynn, whose snooty father thinks Buddy is a low-class loser. Then there’s a guy named Randall, Kat’s first husband, a morally marginal fellow with whom Buddy is still somewhat friendly. These high-school relationships die hard.

Buddy’s life is on hold until the house that he and Lynn are planning to occupy is ready. Meanwhile, Buddy lives with Mac. Their proximity is a mixed blessing, exposing each to the best and worst traits of the other and testing their friendship while compromising their privacy.

The investigation of Thea’s death involves the investigation of similar shootings, at first suggesting a serial killer with a more or less random selection of victims. Soon, however, it looks more like the killer is hiding the motive for shooting Thea by creating the appearance of randomness.

Assuming Thea was a carefully selected target, perhaps her management of GBC needs to be explored. Indeed, we learn that the company had long been infected by a money-laundering operation. Perhaps Thea had learned something that threatened the criminal enterprise behind it.

Now, people close to Thea might be close to information that could get them killed. Mac is not only disconsolate over her death, but also fearful for his own life and the lives of others. He has sent Kat and her son (who is not Mac’s child) away. Their safety is one issue; the likely collapse of their marriage is another.

Buddy, positioned as the narrator, serves as Mac’s confidant and counselor. He observes how Mac feels trapped: He will either be a mob victim like his sister or a prisoner because of his knowledge of — and indirect benefit from — the illegal activities within GBC.

Mac decides to resign from the governorship, and Buddy helps frame the timetable for a meeting with federal agents at which Mac might be able to strike a deal. Off and on, Mac shows and expresses suicidal tendencies.

Is he the title character? It seems so for a while, but there’s another candidate who fits the bill more closely.

Buddy, much to his regret, accompanies Mac on a resort vacation. Buddy proves susceptible to ethical misconduct. He cheats on Lynn, though it seems later that the women luring him into betrayal were part of a set-up.

As the likelihood of arrest or death by assassination looms larger and larger, the suspense thermometer rises higher and higher. However, several other aspects of the novel rival this center of interest.

One of these is the sophisticated handling of the relationships between characters. Author McCann does a credible job of probing the moral chemistry of each, the shadings of good and evil, reason and unreason. Buddy’s relationship with his mother is well drawn, as is the portrait of his mysterious missing brother, Henry, who will end up being an important piece of the plot puzzle.

Another area of interest is the portrayal of big-time business and governmental activity as ultimately a family matter.

McCann’s evocation of setting — including Annapolis — is also one of the novel’s strengths. As someone who spent almost 29 years as a professor at the United States Naval Academy, I found the author’s treatment of the Maryland Avenue and City Dock neighborhoods accurate without being overdone. Snapshots of other locations, including sections of DC and Northern Virginia, are handled smoothly and competently.

McCann’s style is both firm and flexible, occasionally dotted with metaphors and similes. “I had been rendered without faith in my own judgment,” remembers narrator Buddy. “Like someone lacking depth perception trying to parallel-park, I figured the best I could do was listen for the sound of crunching metal and be glad if I didn’t hear it.” Here the author conveys much about the moral world of his main character and of the novel.

In one scene, in which Buddy is held at gunpoint, he encounters a gray-haired man “as suave as a fundraiser.” Such small tough-guy delights pierce the brooding atmosphere of The Man Who Asked to Be Killed, establishing McCann as the innovator of what someday might be known as Maryland Noir.