The Lost Landscape: A Writer’s Coming of Age

A revered storyteller writes something of a "love letter" to her parents. 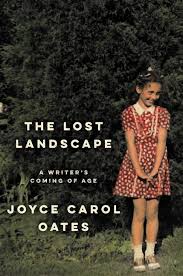 Joyce Carol Oates began in a place — an idyllic place — of family and farms and animals, of fields and creeks and woods. And in a time, the 1940s, of the nuclear family, household chores, and Sunday drives. Her family was blue-collar, her grandparents were immigrants who spoke broken English. The extended family lived together in a farmhouse in western New York, and Oates attended the same one-room schoolhouse as her mother.

But she always knew there are mysteries to be found in the seemingly ordinary: There are secrets and lies and cruelty in the same place as honesty, sincerity and kindness. To begin with, the couple she thought were her maternal grandparents — the ones she lived and worked with on the farm — were not. But it was never discussed. About this chronic withholding of information, Oates says, “We knew though we did not know, for no one had told us.”

We live in the age of memoir, and so it makes sense that a writer of Oates’ stature would take the time to tell her own story, and that readers would be curious to find out more about the woman behind the words. She has written autobiographically before — some short essays, a book on writing and craft, and her longest memoir to date, A Widow’s Story.

The Lost Landscape: A Writer’s Coming of Age is a book about how the “arrested and abbreviated moments” of childhood are the fragments that might finally be woven into a coherent narrative — or, as she has explains here and elsewhere, “How language, ideas, and experience are assembled to create art.”

What Oates does is to place herself, literally and figuratively, on the map of the world. This roadmap of her childhood reveals a curious, secretive, awkward, precocious little girl, very much an observer and an outsider, very much aware of the difference between loneliness and aloneness, and very much drawn to the darker side of human nature.

In fact, there is more here than “loss of innocence” moments: There is murder and violence in her bloodline, and even under her nose. These have always been subjects for Oates, as her readers well know. But the focus here is loss. What she loses in childhood ranges from the commonplace to the truly tragic. Much of it heartbreaking, all of it “haunting,” as Oates herself puts it.

To me, the most haunting and heartbreaking revelation has to do with Oates’ younger sister, “the lost sister,” and the sacrifices her parents made in order to care for her. This is the story Oates has been trying to tell all her life — the book she has not quite gotten right, because even here, when she is giving readers the facts, there is a long, horribly sad silence. There are “lost sisters” in many of her novels, but never the lost sister.

About halfway through this book, I found myself thinking that this is a woman who, if I met her, I don’t know which urge would be stronger: the one to hug her closely, as if to keep her safe, or the one to run away and hide. It is precisely this dichotomy that is at the center of her work — whether in poems or essays or stories, it’s the underlying tension that keeps us reading and wondering. What we recognize, of course, is ourselves, and the human condition that is, ultimately, to be vulnerable — and, really, to be like a child.

Oates is the progeny of a generation that believed in hard work as the antidote to pain, and they believed in the protection of privacy — perhaps to a fault. And so, what readers of modern memoirs might be longing for is not found here. We feel as if we are in the presence of a woman confiding but not confessing. There is reticence and respect.

Oates, unlike many memoirists today, does not see herself as a victim of a neglected or abusive childhood or even a neglected or abusive world. In fact, much of what is here (as she tells us herself) is a love letter to her parents. They were, by her account, courteous, conventional, hardworking, and dedicated people.

And their famous daughter certainly has all of that in her makeup, along with something much more colorful. She is not the tortured artist, but there is a sense of one who obsesses — there is a need for experience, for danger, for peering down the rabbit hole like her favorite childhood heroine, Alice in Wonderland.

The Lost Landscape is not a fluid memoir like A Widow’s Story; it is a collection of essays, most of them previously published, loosely hanging together thematically. There is no real narrative arc, only a disjointed chronology. The pieces jump around, there is a good deal of repetition, and some are so slight (like “Discovering Alice”) and others so inexplicably long (like “Where Has God Gone”) that we find ourselves a bit lost.

The book has the overall feel of something gathered rather than a story told. Which is a shame, for here we are in the hands of one of the most well-known, revered storytellers of our time, waiting to see how the inner and outer worlds of this particular childhood become what Oates actually is: something of a literary rock star.

Or, perhaps, that is precisely her point: “The writer is the decipherer of clues — if by ‘clues’ is a broken and discontinued subterranean narrative.”

Memoir is a difficult genre; throughout the book, Oates acknowledges the problems with memory: “Our lost selves are not really accessible.” And yet we keep looking. It’s why the stories of artists’ lives fascinate us: Who was the child who grew up but never forgot the mystery and power of the imagination? We want to know.

In The Lost Landscape, Oates suggests that the question is unanswerable: “Sometimes in my writing, when I am most absorbed and fascinated, to the point of anxiety, I find myself imagining that what I am inventing is in some way ‘real’; if I can solve the mystery of the fiction, I will have solved the mystery of my life.”

Holly Sneeringer has an MFA from Goucher College. Her work has appeared in various places, including the St. Ann’s Review, the Gettysburg Review, and the Los Angeles Review. In 2013, she was the recipient of A Room of Her Own Foundation’s Orlando Award. She has taught writing at Towson University and the University of Maryland, Baltimore County (UMBC), and is a fiction editor at the Baltimore Review.

His Father’s Son: The Life of General Ted Roosevelt Jr.