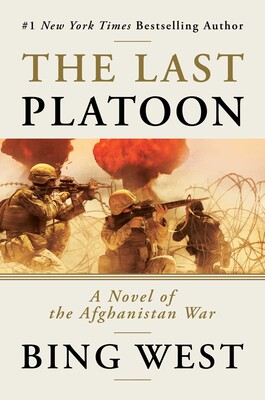 Afghanistan is no longer on the minds of most Americans. The United States’ longest war — two decades now — is slowly winding down, and we have other things to think about, such as the pandemic and a broken political system. But Afghanistan remains on the minds of America’s military leaders and the grunts who are still, in small numbers, patrolling its dun-colored ground and occasionally dying on it.

Bing West knows Afghanistan and he knows Marines. He was a combat Marine in Vietnam; wrote a manual on small-unit tactics and a seminal paper on counterinsurgency; worked for the Rand Corporation; served as assistant secretary of defense; and, most important for this review, embedded with combat Marines well into his 70s. West is now 80 and has just written The Last Platoon.

This is a novel that, on its surface, is a war story spanning one week with Marines in the end phase of Afghanistan. But between the lines is the soul-sucking realization that the past 20 years in that country add up to absolutely nothing. It’s Vietnam all over again: Win all the battles and lose the war.

The Last Platoon is about a small group of Marines deployed to Helmand Province to provide artillery support for an Afghan army unit assigned to re-take a provincial capital from the Taliban. The mission is to last seven days, then the Marines will go home. Security for the unit is assigned to a captain with a distinguished combat record on several previous deployments.

The captain, named Cruz, is a warrior who doesn’t blossom in admin jobs back in the States and has a poor efficiency report, a blot that will keep him from being promoted to major. A friendly general assigns Cruz the Afghan mission as a way to improve his chances for promotion.

Helmand is not a place where America’s interests are taken seriously, and Cruz had no sense of the mission:

“If a senior officer had ever asked his opinion about why they were in Helmand, he would have said he had no idea. No farmer’s heart would be won and no farmer’s son would fight for the government in Kabul, somewhere on the other side of the moon.”

There is a parallel story in The Last Platoon. It involves local opium growers, Pakistani intelligence, an Iranian, and others whose only goal is to get the Americans out so that they can get on with the business of turning the country’s opium into heroin and reaping the resulting fortunes. The Taliban are only the latest adversary in Afghanistan’s endless history of tribalism, violence, and greed.

In West’s story, they drink and carouse when able and enjoy whatever passes for a good life in a country that has repelled outsiders for a thousand years. As one of West’s characters tells Captain Cruz, “Democracy was never the future for these tribes…We’re antibodies in this culture. You were sent on a fool’s errand.”

West does an excellent job of describing the courage of the Marines and the whizbang war-fighting equipment they carry. They are state-of-the art warriors battling illiterate farmers who wear sandals and carry old Kalashnikovs. Yet the farmers are winning — not because the Marines aren’t up to the task but because of political calculations back home.

We are left to ponder whether we should have been there in the first place, in the white-hot moments after 9/11. America wanted to teach “them” a lesson. In the end, it’s we who are learning one.

More than 2,300 of our servicemembers have died in Afghanistan, and countless others have been maimed in body and/or mind. There is little doubt in higher circles that the Taliban will be the dominant power there when we at last declare something like victory and get out as we did in Vietnam, leaving the country pretty much like it was before we arrived.

West’s story is a lesson in the courage and fighting ability of Marines. It is also a lesson in petty politics in the military and epic politics in Washington. In the end, it comes down to the cost of it all. A trillion dollars, give or take. The casualties. The spiritual price. The heartbreak.

The mission depicted in The Last Platoon costs Marine lives. We get to know the men a little before they die in the dust. Here’s a scene that can break your heart:

They arrived shortly after eight at a small bungalow on a quiet street. After they knocked, a slight, pleasant women in her fifties opened the door. When they introduced themselves in subdued voices, Mary Lamont sagged, grasping the door for support.

It wasn’t a question.

There have been more than 2,000 such knocks in the 20 years we’ve been in Afghanistan. Bing West’s The Last Platoon is a novel written by someone who has seen too many soldiers and Marines die. It’s the kind of book that will leave you feeling empty inside.

The Violinist of Venice: A Story of Vivaldi