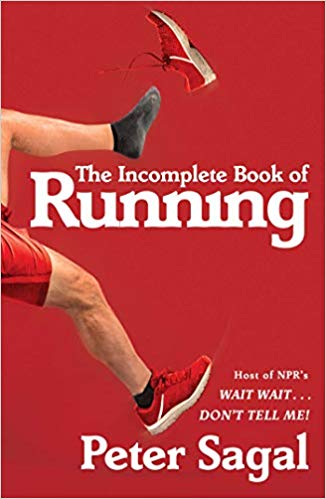 Anyone who’s ever run for fitness, for fun (are there people who do that?), for recreation, or to be a better person will appreciate Peter Sagal’s The Incomplete Book of Running. In it, he lays out a fascinating tale of becoming a serious distance runner at age 40 as a way to improve his health.

Surprisingly, though, the best parts of Sagal’s short and often quick-witted memoir aren’t about running at all.

When he describes tender moments from his daughters’ early childhood, when he admits to feelings of personal failure at the unraveling of his 20-year marriage, when he tells us even running can’t completely cure his sadness, that’s when Sagal’s book goes from pithy to poignant.

He’s hilarious, yes, and beloved by many as the longtime host of NPR’s quiz show “Wait Wait…Don’t Tell Me!” Some portions of the book read like a stand-up routine, and they’re great. But when Sagal describes the empty townhouse that he can’t quite make feel like home, that’s when the book sucks us in.

His honest account of an eating disorder in high school reminds us we have all struggled — and sometimes still struggle — to measure up. So many fitness and advice books out there promise to transform us if we only follow the program. This book is an encouraging account of self-acceptance.

Thank you, Peter, for sharing with us. I could never keep up with you on a run, but I sure can relate to many of the twists and turns life has dealt you.

In addition to taking the reader along on some races and training runs, and giving insight into the importance of a supportive running group and good nutrition, Sagal entertains with sprinklings of fascinating research.

For instance, Professor Ray Fair of Yale University has found marathon times slow by about a minute per mile among elite runners each year of age past 40. So improving your running time in middle age, something Sagal set out to do twice, is statistically improbable (but not impossible).

When Sagal develops the somewhat alarming habit of needing a restroom about a mile into every morning run, he finds Dr. Satish Rao, chief of gastroenterology and hepatology at, and director of, Augusta University’s Digestive Health Center. This guy has tested what happens to our colon when we exercise vigorously. (Sagal uses great quotes from Rao to describe how this is done. You’ll want to read them for yourself.)

The book is full of wonderful cultural references, and Sagal is creative in drawing from diverse sources to stitch together his running philosophy. Consider Dan Savage, a sex columnist, author, and activist known for, among other things, his “It Gets Better” project aimed at helping gay youth. Sagal reminds us of Savage’s GGG adage, which stands for “Good, Giving, and Game” (qualities he says are important for every sexual partner to possess).

Sagal’s own “GGG” phrase — Gradual, Goal, Group — to help people new to running means: Start gradually (who among us hasn’t burnt out by trying to do too much, too soon?); set a realistic goal (for me, that’s not a marathon, but maybe sign up for a race and “don’t fall down, and don’t be last”); and join a running group.

Sagal is right when he says that last one is tough, because new runners feel embarrassed to be bad at something in front of other people. Get over it, he insists, and find yourself a group to run with at least some of the time. That’s good advice.

I was disappointed Sagal didn’t delve deeper into some of the more serious topics in his book, like his own depression. It’s obvious he has worked hard to avoid sharing details of his divorce that might be upsetting for either his ex-wife or his three daughters to read. That’s kind.

And he’s generous to remind us that running is no cure-all, but it can help with myriad ills. So can volunteering, and his accounts of being a blind runner’s guide during the Boston Marathon made me want to at least step up and help out at a hydration station during an upcoming neighborhood race.

I’m hoping Sagal tours with his book so I can attend a signing and ask for some advice. When I go for a jog, inevitably a song gets stuck in my head. Sometimes it’s torture, like recently, when I had a loop of “Kidnap the Sandy Claws” from “The Nightmare Before Christmas” repeating during a four-mile slog in the humidity of Washington, DC. When you only know a few of the lyrics, those words repeat over and over (“Kidnap the Sandy Claws, lock him up real tight…”).

Donya Currie is a journalist, fiction writer, and web manager and communications editor for a nonprofit organization in Washington, DC. She has never run a marathon but can be seen jogging the sidewalks of Arlington, VA, a few times a week.