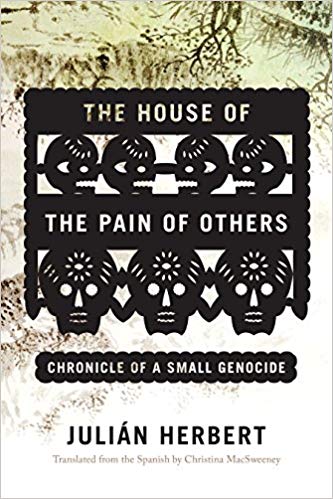 Torreón is a city in the Chihuahuan desert state of Coahuila, Mexico, but in a fertile region called La Laguna for its many lakes. It is known, according to author Julián Herbert, for three things: sex, wrestling, and soccer.

Its licentiousness is longstanding, perhaps a natural product of the area’s foundation in commerce and an initial lack of the restrictive presence of the Catholic Church. Whatever the reasons, from the early 20th century, Torreón’s many brothels were considered the best in northern Mexico.

And the city’s love of lucha libre is outstripped only by its fanatical adoration of fútbol. The motto stamped on the main entrance of the local soccer stadium, “The House of the Pain of Others” gives this book its title.

Torreón is known for one other thing: the massacre, in May 1911, of 303 Chinese residents over two days during the Mexican Revolution. In searching for an understanding of this “small genocide,” and, perhaps, a level of accountability, Herbert takes us on a wide-ranging journey. It is a history lesson, a personal travelogue, a journalist’s notebook, and a disquisition on the nature of violence and the meaning of community.

The bits and pieces of the story Herbert heard over the years, and then a new edition of Juan Puig’s Between the Perlas and the Nazas Rivers, intrigued him so much that he thought he would write a novel about the massacre. He then realized, however, that doing so would betray the victims: The story was already fully fictionalized in the national mindset.

Beyond incorrectly placing Pancho Villa at the scene of the slaughter, the popular conclusion continues to be that the bloodshed was a result of opportunism and greed perpetrated primarily by camp-following looters, rather than “an act of xenophobia carried out by the people of La Laguna,” as the director of Torreón’s Museum of the Revolution explains to Herbert.

As the author succinctly states, “It is a thesis with which I disagree.” Instead, he chooses to dismantle that conclusion by developing a thorough chronicle of the events through extensive research that includes boots-on-the-ground investigation.

Throughout The House of the Pain of Others, the author proves an engaging, earthy tour guide (a desert dust cloud is “like fog, but with the taste of phlegm and suffocation") whose seeming digressions into both past and present serve to underpin our understanding and illuminate his analysis of events. He interweaves histories of Torreón with those of wider Mexico and China, as well as the tangled interrelations among Mexico, the United States, Europe, and China.

For U.S. readers not steeped in history lessons of the Mexican Revolution, Herbert offers multiple guideposts, including a chapter called “Cast List.” The chronology in the back of the book is both helpful and revealing.

(Diaz was hoping to encourage European immigration with the intent of whitening the gene pool and, thereby, to his thinking, raising his country’s racial and cultural bar.)

The United States remained the preferred destination of the Chinese, even though discrimination was baked into the American legal code. Beyond the Exclusion Act, many U.S. laws treated the Chinese as the lowest caste in a cohort of oppressed minority and ethnic groups.

For example, Herbert reminds us that, until 1968, there was a California law that forbade Chinese men from marrying “white women” — perhaps the only time in history in which that particular phrase was defined to include African-American and Native-American women.

Thus, the beacon of U.S. opportunity, combined with the legal roadblocks of the Exclusion Act, meant that the coyotes of the late 19th century were making their money by smuggling Chinese across Mexico’s northern border.

The resentment and discrimination faced by immigrants who remained in Mexico was founded, as is so often the case, on economics. The influx of new labor willing to work on the cheap drove down wages. Diaz’s policy of encouraging immigration was seen as favoring foreigners over native Mexicans.

As more and more Chinese put down roots, started businesses, formed civic associations, and even — as with the Torreón’s Banco Chino — founded banks, the Mexicans increasingly viewed these outsiders as a threat to their own prosperity and to their communities.

In 1888, Wong Foon Check was the first Chinese native to disembark from the train in Torreón, carrying baskets of goods from his homeland to sell. Twenty-three years later, when Torreón’s Chinese population numbered about 600, roughly half were slaughtered over the course of two days as the anti-Diaz Maderistas brought the revolution to the town. Their businesses were looted; they were robbed and stripped; in many cases, their bodies were mutilated.

Though a commission established soon after the massacre found that the Chinese did not precipitate the violence, as many Mexican townspeople and revolutionaries claimed, there was no reckoning. As Herbert writes:

“What emerged from the 1911 Torreón massacre was not repentance, or even self-criticism, but a symbolic acceptance of transgression: any further ill-treatment of the Cantonese now had a historical precedent that not only justified but excused it, since it was less serious than that canonical outburst of violence.

“This is how the economy of cruelty functions.”