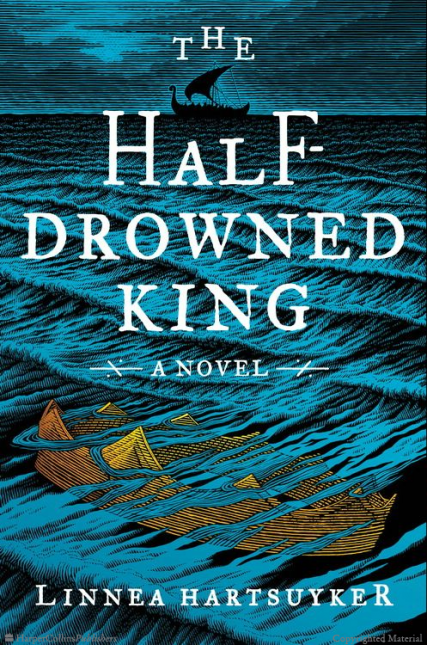 Think, for a moment, about what a poorer place this world would be without betrayal. We would have no Odyssey, Othello, or The Count of Monte Cristo. We would lack the enemies we love to hate, like Benedict Arnold or Judas Iscariot.

Without the allure of betrayal, loyalty has no meaning. Caesar’s “Et tu, Brute?” would elicit only disdain for the ruler’s foolhardy trust, not pity at his all-too-human disappointed affection.

It’s no coincidence, then, that many epic myths begin with a betrayal. Linnea Hartsuyker, in The Half-Drowned King, her white-knuckled retelling of the protohistory of Norway’s Harald Fairhair, channels that same emotional power when she opens her novel with the attempted killing of her protagonist, Ragnvald.

Ragnvald and his comrades are sailing to the Norse lands, returning from a season raiding in Ireland, when their charming captain, Solvi, turns on Ragnvald. Solvi slashes his dagger at Ragnvald and lets the younger man drop into the frigid coastal waters. No man could survive such wounds and the heavy embrace of Ran, the goddess of sea and shipwreck.

Indeed, Ragnvald finds himself in a ghostly underwater hall sitting at a cold bench amid silent, drowned sailors. But just as he is about to surrender to his fate, a strange vision of a golden wolf bursts into the hall. When Ragnvald touches the shining creature, strong hands grasp him and pull him from the water.

We soon learn that Solvi’s betrayal is only a smaller piece of a larger sin. Ragnvald’s stepfather, Olaf, arranged the murder, and Olaf may have killed Ragnvald’s father in the first place. Svanhild, Ragnvald’s fiery sister, struggles to figure out what happened to her missing brother, and then to help him avenge himself.

But matters soon grow complicated when Svanhild discovers that the dashing man who makes her heart race is Solvi, the one who attempted to kill her brother. Though she tries, Svanhild cannot hate him, particularly when she sees how Solvi behaves honorably and works to make amends for his crime.

The legendary Harald, a 16-year-old boy-king with a swift sword and sweet smile, doesn’t appear until over a third of the way through the book. By then, Ragnvald has decided to swear himself into the service of one king who has promised to help him exact revenge on Olaf. But Ragnvald looks at the sparkling boy and wonders if it is his golden hair that the undersea wolf represented. Or was the omen another man — the ambitious son of Ragnvald’s sworn king, perhaps?

Alliances form and tear apart in the bleak world of ninth-century Vikings. Ragnvald, Svanhild, and Solvi each anchor a thread of this narrative, and their interests are so opposed that the reader, enchanted by all three, dreads the inevitable clash that will presumably cause at least one of them to suffer terribly.

Hartsuyker’s twisted plot and her characters’ strained loyalties keep the reader fretful until the end. In this world of casual murder, matter-of-fact raiding, and incentivized rape (if a rapist impregnates his unmarried victim, he can claim her and any land she might hold), no one seems safe.

Amid such mistrust, the bonds that do form are even more precious — and even more tragic when they break. Harald promises to forge a kingdom where monarchs swear fealty to a greater state, and his sword can protect and unify them all. But Ragnvald, Solvi, and Svanhild aren’t sure they can believe that one man, no, child, could fulfill such a wild promise.

As with the finest historical fiction, it’s a question worth asking ourselves today. Do we trust one another enough to throw our lots in together? Can these laws that we have agreed upon truly hold? The form of society is, after all, not predetermined, but rather constantly shaped by its members.

The novel is the first in a trilogy, but it stands well on its own. The later books will benefit from shedding this inaugural volume’s greatest weakness — the annoying immaturity of Ragnvald and Svanhild at the beginning of the story. They whine and pine and fail to see beyond their own noses.

Happily, that phase soon passes, and all three characters grow into themselves and the reader’s heart. This is a delightful novel, one that manages to summon the musty halls of a seemingly distant past and populate them with the complex heroes of our age.

The titular king is, after all, only half-drowned, only half-beholden to the greedy sea goddess. His living half still has loyalties to weave and betrayals to inflict, in the manner of the best epic fiction.

Carrie Callaghan’s fiction has appeared in Silk Road, Floodwall, the MacGuffin, the Mulberry Fork Review, and elsewhere. She lives in Maryland with her family, or in the Internet on Twitter at @carriecallaghan or at www.carriecallaghan.com.