The Guineveres: A Novel

This promising debut with a curious premise doesn’t quite deliver. 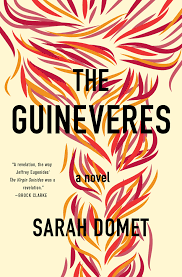 “What’s in a name?” inquiring minds through the ages have mused. In Sarah Domet’s debut novel, The Guineveres, the answer is “everything,” apparently. Guinevere is the unlikely, shared name that unites four girls in their unhappy circumstances. The journey in the book is to discover whether it’s enough to hold them together.

The story opens with an achingly painful premise: Separately, each girl was dropped off, “delivered unto the cool foyer of the convent and into the care of Sister Fran. Each of us had our own story. Usually, our parents whispered that they loved us; they told us to behave. Our mothers gave us lipstick kisses on our cheeks, or our fathers said they hoped someday we’d understand. Then they drove away for good, up the one-lane drive and into a world that was easier without children. They all had their reasons.”

We’re introduced to Vere, Ginny, Gwen, and Win during their unlikely attempt to escape the Sisters of the Supreme Adoration convent inside of a holy parade float. They are desperate to get away, to somehow reunite with their truant parents, forgive them, and start over. When they are inevitably busted by coolly efficient, no-nonsense Sister Fran, their punishment is to help out in the convent’s terminal care and convalescent wing.

It’s here that the girls meet their fate, in the form of four injured, comatose, anonymous soldiers brought to the convent due to the lack of other facilities — just one of many shortages brought about by the War. Eventually, each girl ends up adopting one of the soldiers as her own, believing that if she can nurse him back to consciousness and identity, she will be hailed as a miracle worker and whisked out of the nunnery by the boy’s grateful family.

Interestingly, the timeframe of the story is never actually pinned down. At times, it seems certain that “the War” must be World War II, given the sense of enormity and demand for shared sacrifice with which it’s described.

On the other hand, the feeling imparted by the characters, their dialogue, and other details seems of a different era, as though this is actually the Vietnam War. It may be that Domet was going for a sense of timeless universality to underscore the convent as a place out of time.

Though each girl eventually shares her backstory with us, it seems clear that they don’t share those stories with each other. More problematic is that rather than breathing real life and depth into her characters, Domet often treats them as caricatures, painting the girls, Sister Fran, and others with a broad and heavy-handed narrative brush.

Gwen in particular gets eye-rolling treatment as the selfish and self-absorbed beautiful girl of easy virtue. Domet gives her perhaps the most shattering backstory, but then treats her almost dismissively. I would have expected the author to handle her characters with more care and attention.

There are elements of lovely writing throughout that measure up to the promise of that first page. Domet sprinkles in descriptions of the lives of saints, all women, each of whom represents an eye-popping object lesson in sacrifice that, undoubtedly, Sister Fran wishes to impart to her always possibly wayward girls.

But where it really counts, the novel is missing the depth and nuance that would have transformed an interesting story into a deeply felt story. Vere, who remains a cypher even after we finally learn her background, is recounting this story from the perspective of knowing the ending, but that knowledge never infuses the story she’s telling.

It’s a delicate balance for an author to have an adult tell the story of her adolescent self, to effectively capture the naiveté and lack of perspective in that moment, while still imbuing the recollection with some of the understanding the character has garnered over the years.

As Vere tells us, “We cling to the most painful reminders of our youth, our memories or our injuries, perhaps so we can look back to our former selves, console them, and say: Keep going. I know how the story ends.” Domet tells us; it would have been more powerful for her to show us.

I, Ripper: A Novel

Jack's back in this gripping, grisly tale.