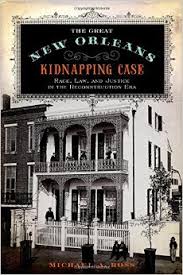 The case was combustible. Two mixed-race women, abetted by the son of one of them, stood accused of kidnapping a blonde, blue-eyed white baby girl in New Orleans in 1870. How did it end? Author Michael Ross expertly keeps readers in suspense as he weaves this true tale of crime, culture, politics, and colorful Southern characters — including a riverboat captain, “mulatresses,” and a precedent-setting Afro-Creole detective.

The case began on the afternoon of June 9, 1870, when Bridgette Digby sent her 10-year-old son, Georgie, and toddler daughter Mollie outside to play under the supervision of a teenage babysitter. Two stylish, fair-skinned African-American women happened to be strolling by. As they stopped to admire Mollie, a fire broke out a few blocks away, and the excited babysitter asked Georgie to hold his sister while she ran to watch the fire.

“No bubby, I will take the baby,” one of the women said. The women asked Georgie to lead them to the home of a certain neighbor. Once there, they told Georgie it was the wrong house, and then sent him to the market to buy a treat for his sister. A heart-stopping shock awaited Georgie when he came out of the market. The women were gone, and so was his baby sister.

In the era of post-Civil War Radical Reconstruction, the Digby kidnapping case quickly became the focus of public fears and sensationalistic press coverage. Louisiana Governor Henry Clay Warmouth, a young Union army veteran from Illinois, saw the case as an opportunity to demonstrate to skeptics the professionalism of the newly integrated New Orleans police department. When Afro-Creole detective John Baptiste Jourdain was assigned to the investigation, he became the first black sleuth in the nation to work such a prominent case.

Leads poured in. Detective Jourdain, who sometimes donned a disguise, and other investigators questioned mulatto women, nursemaids, voodoo practitioners, even a clairvoyant, all without success. Then, nearly two months after Mollie Digby disappeared, acting on a tip, Detective Jourdain and other police officers went to the home of an “attractive mulatto woman,” Ellen Follin, who, like Jourdain, was Afro-Creole. She denied having the child, but a suspicious Jourdain threatened to have everyone in the house arrested unless she produced Mollie soon.

Within two days, former riverboat captain James Broadwell, who was white, appeared on the Digbys’ doorstep. “I think I have your child,” he informed Mollie’s father. A black woman friend of the Broadwells had allegedly asked the captain to return the baby who, she claimed, had been left at her gate by a veiled white woman. The Broadwells’ friend was none other than Ellen Follin. With Mollie’s safe return, Follin, her son, and her sister were all arrested on kidnapping charges. (The arrest date for the sister differs from page to page, one of very few discordant notes in this otherwise well-researched narrative.)

Case closed? Not exactly. Ross smoothly switches narrative gears to recount the progress of the case through the courts, from an extraordinary four-day preliminary hearing, to consideration by a grand jury, to a four-day trial in January 1871 that ended after a mere eight minutes of jury deliberation.

The crime, Ross says, occurred at a unique “moment of possibility” for equal justice in Louisiana. The Reconstruction Act of 1867 had given Southern black men the right to vote. The Louisiana constitutional convention of 1868 had gone further, making it possible for black men to serve on juries and requiring public officials to protect the “equality of all men.” At least four of the 16 grand jurors who heard the Digby case were black, and two of the 12 trial jurors were also black.

“At nearly any other time in Louisiana’s history,” says Ross, all-white juries had convicted black defendants on flimsier evidence than that presented in the Digby case. Reconstruction had “changed the equation,” temporarily.

Who did kidnap little Mollie Digby? In 1930, Mollie, then in her sixties, began writing her own story, based on family lore. The mastermind of the kidnapping plot, she said, was Captain Broadwell, in need of a “replacement” for his own dead child, without whom he and his wife would have been disinherited by his father-in-law. Ross finds little evidence to support this theory, however, and concludes that the identity of Mollie’s kidnapper remains an unsolved mystery.

The Great New Orleans Kidnapping Case is as much a lively portrait of a unique city as it is a suspenseful mystery and a political history of an all-but-forgotten era. The exotic atmospherics include rumors of voodoo human sacrifices, yellow-fever epidemics, Mardi Gras parades, and the nuanced relationships of Afro- and white Creoles. Ross set out to mine “a single historical moment for insights into both the history of New Orleans and the Reconstruction era.” He succeeded.

Susan Tejada is the author of In Search of Sacco and Vanzetti: Double Lives, Troubled Times, and the Massachusetts Murder Case That Shook the World, recipient of the Independent Publisher Book Award gold medal for true crime. She was previously a writer and editor at the National Geographic Society.