The Great Guide: What David Hume Can Teach Us about Being Human and Living Well 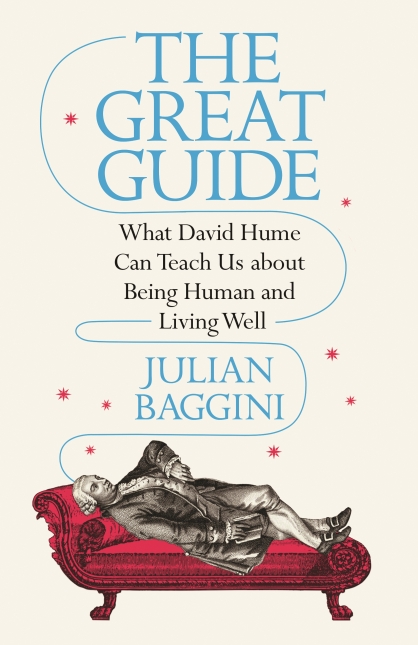 In this engaging and smart book, Julian Baggini (independent scholar; founding editor of the Philosophers’ Magazine; author of several books on philosophical themes) turns to the life and writings of David Hume (1711-76) to find what lessons this central figure of the 18th-century Scottish Enlightenment might offer to readers of the 21st century. Or, as his sprightly subtitle puts it, “What David Hume Can Teach Us about Being Human and Living Well.”

So, what lessons does Hume deliver?

Baggini sets out by defining his subject and approach. Hume is “adored in academe,” he argues, but “is unknown in the wider world.” To bring him to general readers, submits Baggini, “I want to approach David Hume as a synoptic whole, a person whose philosophy touches every aspect of how he lived and who he was.”

Hume “never allowed himself to take intellectual flights of fancy,” writes Baggini. Instead, he “always ground[ed] his ideas in experience, which he called the ‘great guide of human life.’”

In The Great Guide, Baggini explains that he has “extracted the essence of the lessons we can learn” from Hume. In Baggini’s text, these “lessons” — about 150 of them — are in bold italics. An appendix, “Humean Maxims and Aphorisms,” gathers these together and groups them under 15 categories. So, for instance, under the category “On Religion,” one finds this line from Hume’s A Treatise of Human Nature: “Generally speaking, the errors in religion are dangerous; those in philosophy only ridiculous.” Hume, readers soon find, was a master of such one-liners.

Occasionally, lessons are not taken directly from Hume but rather from later philosophers — Charles Sanders Peirce, Ludwig Wittgenstein, and others — who, Baggini maintains, were influenced by Hume, built upon his thought, or taught lessons similar to Hume’s.

About two-thirds of the maxims and aphorisms are not direct quotations from Hume or other philosophers, but instead are Baggini’s summaries of what he takes to be a Humean lesson. There is, of course, danger in such summation. Not all will agree with the summaries presented. By and large, though, Baggini is convincingly Humean. Under “On Politics and the Good Society,” for example, we have Baggini’s distilled Humean lesson: “The certain harms of the status quo are sometimes more real than the uncertain dangers of reform.”

A notable asset of Baggini’s book is that it offers more than a catalog of Humean teachings; it provides an approachable account of Hume and his world. Indeed, Baggini writes that he hopes “to convince” readers “that attending to a philosopher’s life helps make better sense of their work and that biography is a tool for the study of philosophy, not a distraction from doing it.” That in itself is a useful lesson.

For Hume’s biography, Baggini draws heavily on studies by E.C. Mossner, James Harris, and Dennis Rasmussen. Interestingly, he also travels to many of the places Hume lived or visited. “To write this book,” he explains, “I have followed in Hume’s footsteps.”

Particular attention goes to Hume’s various domiciles in Scotland and the many places he visited during trips to France. Black-and-white photographs help bring to life some of what Hume and Baggini saw, such as the magnificent interior of the Hôtel de Brancas, where Hume resided in Paris. Baggini also remarks that “Hume was a man who valued both solitude and good company and seemed conflicted as to which was preferable.”

Hume scholars will no doubt debate some of what is presented here. For instance, Baggini’s claim that “since its first edition in 1954,” Mossner’s biography of Hume “has been considered the definitive biography.” (A senior Hume scholar once confided to me that he shelved Mossner in the fiction section of his library.)

Elsewhere, Baggini makes much of a manuscript said to be “held by the Royal Society of Edinburgh called ‘Character of -----------, written by himself,’” claiming: “This is not in Hume’s hand, but it is corrected in his handwriting and is assumed by scholars to be by him and about him.” Many informed Hume scholars do not think this manuscript — which, since 1987, has been held in the National Library of Scotland — was penned by Hume.

Other shortcomings concern what Baggini does not present. None of his “Maxims and Aphorisms” are derived from Hume’s multi-volume The History of England, the book to which Hume devoted decades of his life and which was arguably his best-known and bestselling publication in the 18th century. Its absence here is striking and most unfortunate since it is replete with passages that might have been advantageously incorporated into Baggini’s Humean lessons. To wit: It boasts much on the category of “Human Nature” derived from historical experience, including Hume’s reflection that Queen Elizabeth’s favorite, the Earl of Essex:

“[Was] but thirty-four years of age, when his rashness, imprudence, and violence brought him to this untimely end. We must here, as in many other instances, lament the inconsistency of human nature, that a person endowed with so many noble virtues, generosity, sincerity, friendship, valour, eloquence, and industry, should, in the later period of his life, have given reins to his ungovernable passions, and involved, not only himself, but many of his friends, in utter ruin.”

So, Beware the inconsistencies of human nature. (Or, perhaps, Choose your friends wisely!)

It is also regrettable that Baggini’s book is riddled with misunderstandings and material errors. Here is a string of them: Eugene Miller is described as “an editor of [Hume’s] letters.” Miller did not edit Hume’s letters, but rather a modern edition of Hume’s Essays: Moral, Political, and Literary. Miller’s foreword to that collection offers a useful publishing history of Hume’s essays from which Baggini might have benefited. It may have saved him, for one, from his misunderstanding that Hume’s essays “were published in two volumes of Essays, Moral, Political, and Literary in 1741 and 1752.”

No volumes by that title were published in those years. But this is also how Hume’s essays are listed in Baggini’s bibliography of Hume’s “main works” and how individual essays are referenced in Baggini’s text. This way of presenting things garbles the complicated publishing history of Hume’s essays. There are other problems with references, as well. For instance, Book Two of Hume’s Treatise was published in 1739, not 1740.

Of Hume’s essay “Whether the British Government inclines more to Absolute Monarchy, or to a Republic,” Baggini writes, “By 1777 Hume was able to write…” Hume did not write anything in 1777; he died in 1776, as Baggini knows. Finally, the mausoleum over Hume’s grave in the Old Calton Burial Ground was designed by Hume’s friend, the architect Robert Adam, not “Robert Adams,” as Baggini has it several times.

Putting such slips aside, for general readers and Hume scholars alike, this remains a well-worth-reading book that admirably captures much of the essence of Hume and shows his continued relevance today. Part philosophy, part history, part self-help guide, part travelogue; it’s a compelling mix. Julian Baggini’s The Great Guide entertainingly illuminates understudied aspects of its subject’s life while demonstrating that David Hume is still, indeed, a great guide.