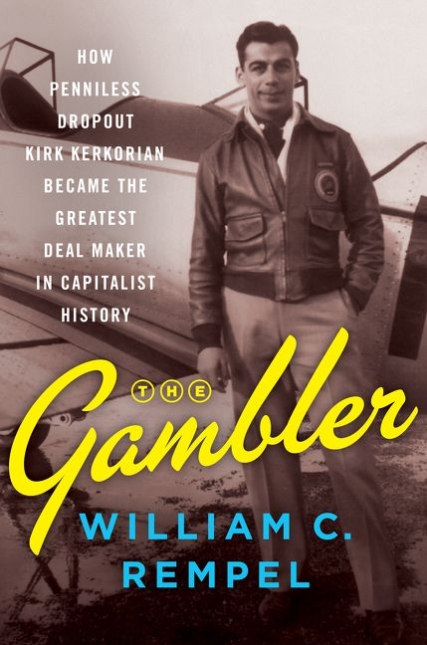 There is an enduring American story that has become a part of our national narrative. It’s the story about the poor boy or girl who endures a childhood of deprivation, grows up and, by force of will and personality, creates an empire. Think Andrew Carnegie or Henry Ford or Oprah Winfrey. And Kirk Kerkorian, who went from eighth-grade dropout to billionaire, the most powerful man in Las Vegas.

Reading about Kerkorian is a bit like reading a movie script, complete with family evictions, wartime derring-do, smarts, and almost miraculous luck. William C. Rempel’s The Gambler has it all.

Actually, it verges on too much.

The subtitle of The Gambler is How Penniless Dropout Kirk Kerkorian Became the Greatest Deal Maker in Capitalist History. That may be a stretch, but not by much. Kerkorian was the son of Armenian immigrants who found their way to California to escape the violence that produced the slaughter of Armenians as the Ottoman Empire was collapsing and Turkish forces were engaging in mass ethnic cleansing. Kirk’s father made a fortune in raisins in America and lost it all. Evictions were a way of life for the family.

Kirk sold newspapers at the age of 9 to support the family. He dropped out of school in the eighth grade and worked odd jobs. Kids could do that in the 1920s. During the Great Depression, he found a job with the Civilian Conservation Corps, a New Deal program to provide government pay in return for work on the nation’s public lands. Later, he steam-cleaned engines as a gas station. He became a boxer known as “Rifle Right” Kerkorian and made a name for himself in the ring.

He learned to fly and ferried warplanes across the Atlantic during World War II, a very dangerous way to make a living. He took risks others thought foolish. After the war, he bought surplus cargo planes and made a killing selling them in South America. He built an airline and sold it, built another and made a huge profit once again.

He got to know movie stars and bankers. He bought a small casino in Las Vegas and used his stratospheric tolerance for risk to work his way up. He built the International Hotel, then the world’s largest hotel and casino. He brought in a singer named Elvis Presley, who blew the lid off Vegas and changed the face of the city. Today, you can be married by an Elvis impersonator. Thank Kerkorian. He bought MGM, then a fading movie studio, and built the MGM Grand, a Vegas landmark.

Kerkorian rubbed elbows with mobsters, then a fading but still-there presence in Las Vegas, and his enemies — which included everyone he had outsmarted — tried to smear him by association. Even Howard Hughes, whose life was also the stuff of legend, tried and failed to stop Kerkorian from building his dreams.

Kerkorian was a private man who shunned publicity, refused to be comped food, rooms, or drinks at his own hotels, drove his own car, and was privately generous to friends and fellow Armenians. Following a devastating earthquake in Armenia, Kerkorian did more for the country than its government did, becoming a national hero even as he was trying to keep his name out of the papers.

His personal life, however, was messy. He was married and divorced, then took up with A-list Hollywood names, not always with happy results. He had a long and terrible relationship with a professional tennis player who made it clear she wanted to be Mrs. Kerkorian for the sole purpose of inheriting his wealth. She claimed, falsely, that he fathered a child. (Kerkorian was in his 80s and all but sterile by that point.) He went along with it, partly out of vanity and partly because by accepting paternity he would have a say in the child’s future. He had become fond of the little girl.

He died in 2015 at the age of 98. His life resembled a stock chart: up and down, but mostly up. His life is the story immigrants have told their children since the early days of America. Work hard, be smart, be brave, be generous, and always remember where you came from. He was not a vindictive man, nor was he cruel to the people he vanquished. He held no grudges, even against those who plotted to bring him down. “It’s just business,” he’d say.

William Rempel has told a heck of a story in detailing Kirk Kerkorian’s life. It gets a bit bogged down in the details of some of the financial schemes that bankrolled his big ideas, but that may be a plus for readers interested in how the big money is played at high stakes. At the very least, it’s a story about an extraordinary man who outsmarted everyone around him and became an American legend.

Larry Matthews is a former journalist and author. His latest book is Nine Millimeter Solution.

Audacity: How Barack Obama Defied His Critics and Created a Legacy That Will Prevail

A mostly positive appraisal of the 44th president’s time in office.