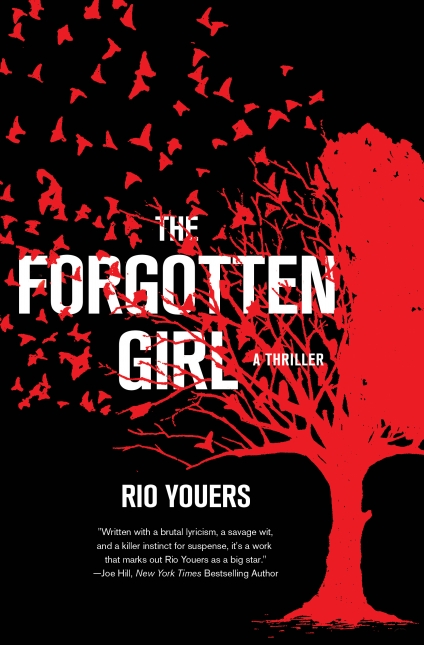 In this era of genre splitting, there are pluses and minuses to being labeled a “supernatural thriller.” On Amazon, for example, there are six times fewer books listed in this category than “suspense thrillers.” There are even more books in “supernatural science fiction” and “supernatural mysteries.”

Yet, with this diminished competition, one assumes, comes a greater opportunity to gain readers; in the case of Rio Youers’ new supernatural thriller, The Forgotten Girl, I’m guessing anyone who picks it up will be glad they did.

Don’t let the “S” word put you off. While some characters have mystical abilities, the novel’s protagonist-narrator, Harvey Anderson, does not. It’s his willingness to accept that such an ability exists while ignoring his own paranormal shortcomings that generates the story’s drama and makes us root for the hero.

Anderson describes himself as a 21st-century hippie. He tells us in chapter one that he avoids confrontations and has “zero capacity for violence.” Of course, we can guess he’s going to face plenty of both…and soon.

When eight thugs kidnap and beat Harvey before explaining what they’re after, we’re anxious to find out what’s going on. Then, when he discovers he’s lost all memory of the woman he supposedly lived with for the past five years, we know he’s going to try to find her, even though he has reason to expect confrontations and violence as his quest’s likely companions.

The author describes The Forgotten Girl as a 20-year dream, and the novel offers all the elements thriller readers enjoy: gut-wrenching suspense, really bad bad guys, an intrepid protagonist, and even a love story.

What places The Forgotten Girl a step ahead of the average thriller is the way Youers undergirds the supernatural with plausibility. He makes us believe there really are people with the sort of abilities Harvey’s evil mentor possesses, then weaves a story that’s more about the protagonist’s drive to overcome his pacifist outlook than his own psychic deficiencies.

Unlike some thrillers that race along at Mach 5 so the reader doesn’t have time to look too closely at their house-of-cards premises, Girl takes us deep into Harvey’s mind as he wrestles with the implications of his lost girlfriend and what those searching for her will do to find her. This ratchets up the tension and keeps us turning page after page until the satisfying and logical, but nevertheless surprising, conclusion.

Youers offers some wonderful turns of phrase, such as “eyes like hands” and “my tiny superhero cape.” I do have to quibble with the occasional misstep, such as Harvey’s doing Ashtanga yoga right after eating breakfast or recognizing, in a photo, a specific kind of sauce stain on an apron.

Still, my objections are few and minor when compared to the pluses of the rollercoaster ride Youers takes us on. Whether you’re into the supernatural or not, if you like thrillers, you won’t want to miss this one.

Peter G. Pollak is the author of five self-published thrillers. Prior to retiring to write fiction, he was a journalist, educator, and entrepreneur.

Shelter in Place: A Novel