The Floating Feldmans: A Novel

When an eccentric family embarks on a cruise, hijinks (unfortunately) do not ensue. 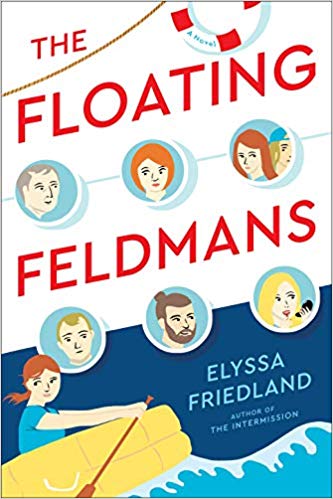 A dysfunctional family reunites on a cruise ship: What a delightful premise for a light and frothy beach read. As you become acquainted with the characters in The Floating Feldmans, you imagine all sorts of personality conflicts — with the matriarch, whose 70th birthday occasions the reunion; with the stoner son whose million-dollar marijuana company has led to a cover story in High Times; with the shopaholic daughter hiding her enormous credit-card debt; and with the granddaughter, who’s having an affair with an older colleague.

After reading the list of special onboard requests — all at cross purposes from one another — that these characters submit to the cruise director, you can hardly wait for sparks to fly. But a hundred pages into the novel, nothing has happened.

You’ve been given a lot of backstory; the characters have located their cabins and met up for dinner. Everybody has worried about their tantalizing secrets, but none have been revealed. Dialogue rarely gets beyond small talk. Life aboard ship is a series of indulgences which the characters enjoy mostly separately.

So, instead of being amused by this commentary on family relationships in a world of personal disconnect, the reader is drowned in tedium. It’s as though, having got her characters aboard the Ocean Queen, “where everyone is treated like royalty,” author Elyssa Friedland doesn’t know what to do with them.

Take the shopaholic, Elise, who sizes up her brother’s girlfriend, Natasha, as “essentially a fetus in jean shorts.” You might expect mounting irritation between them, culminating in a major, funny conflict. Instead, each character exists in a self-involved bubble.

As Natasha observes, the Feldmans are “like a family of hard shelled turtles and it was tiresome to be around a group of people who so clearly wanted to be left to their own devices but also needed to be liked and respected by everyone.”

It’s tiresome to read about them, too.

The story has so much unexplored potential. For example, the budding romance between Elise’s teenage son, Darius, and Angelica, a girl he meets on the voyage. Instead of showing us Darius’ awkwardness, Friedland prefers to tell us about it from his point of view, weighted down with more unnecessary backstory:

“‘What’s your name?’ Darius wanted to bop himself on the head. Angelica had told him her name. It was so socially awkward he didn’t give her his. To think he was congratulating himself on his ‘banter’ a moment earlier. He lacked the basic conversational skills that most preschoolers had nailed. No wonder Marcy never looked his way, choosing instead to splay her heavenly body across Jesse’s lap. Jess, who never forgot to say his name when he met someone new, which was probably how he got the job at the skate shop instead of Darius.”

Remind me never to go on a cruise. It sounds like a nightmare. Being on the Ocean Queen is like being trapped in a gigantic mall or theme park. “The boat was massive like fifty circus tents combined with just as much psychedelic distraction,” but it’s claustrophobic.

You long for someone, anyone — such as granddaughter Rachel, who’s more savvy than the rest of the Feldman clan — to escape to the deck, look across the sea to the horizon, breathe the ocean air, and make a genuine connection with an interesting stranger.

But neither Rachel nor anyone else fills this role. Instead, “Whenever she could Rachel disappeared on the ship, looking for nooks and crannies where she could fantasize about her boyfriend.” And, yes, it’s yet another excuse for backstory.

Every now and again, Friedland throws out a tantalizing detail which you hope she’ll follow through with. A few stoners on the ship recognize pothead Freddy from High Times, for instance. We also learn that there’s a jail on board — with an inmate, no less! — and a morgue. But Friedland does nothing with this material. It’s merely incidental.

The final chapter takes place a year after the cruise, when things are fundamentally as they were beforehand. Sure, someone has died, someone has been born, and Elise has had treatment for her shopping addiction. But on her way to a family gathering:

“She double checked that she was following the GPS correctly and saw Lynn had sent another text Don’t forget to send me a picture of the baby. Elise responded I wont adding a new born emoji with a thumbs up. Darius had patiently schooled her in emojis and she was quite enjoying using them.”

I concur with the sentiments of the ship’s cruise director: “You couldn’t help feeling depressed by the married folks knotted for too many years sentenced to travel everywhere together like salt and pepper shakers…There was only so much that a chocolate fountain, the premium beverage package, and the rhythmic waves could do for a marriage that had run its course.”

I also return to Natasha’s observation that the Feldmans want to be “left to their own devices.” If “happily ever after” amounts to nothing more than sharing emojis, things are pretty bleak.

Amanda Holmes Duffy, the author of a novel I Know Where I am When I’m Falling, is a bookseller at Politics and Prose and hosts the podcast “Read Me A Poem” with the American Scholar Magazine.