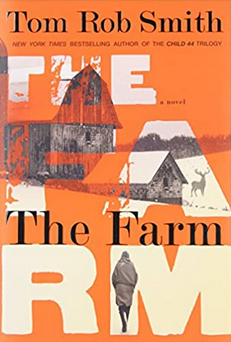 A large farm in the middle of remote, frozen Sweden. A neighbor who doesn’t act neighborly. A missing adopted daughter. A marriage off the rails. Tom Rob Smith’s latest novel offers the perfect setting for a high dose of paranoia and fear. How well do you know the people closest to you, and who do you believe when the stories conflict?

Smith is best known for his debut novel, Child 44, about Stalin’s Soviet Union and the force and paranoia the state security force used to keep the regime functioning. Named one of the top 100 “Killer Thrillers” of all time by NPR listeners, Child 44 won the International Thriller Writers Award for Best First Novel, and was the first of a trilogy. The Farm is his first book since completion of the series.

Starting in England, the story begins with a frantic phone call between father and adult son. Daniel’s father, Chris, tells him that his mother is unwell, hiding secrets, and acting delusional. Shockingly, he has admitted her to a mental hospital, but she secretly discharged herself. His mother, Tilde, surprises Daniel with a phone call that same night, prompting him to drop his groceries in shock. She is, she says, flying from Sweden to England to tell him her side of the story. As his groceries leak into a mess on the pavement, his quiet life unravels before his eyes. For Daniel also has a secret – he is hiding significant complications in his personal life and has been avoiding his parents for years.

Both Daniel and the reader must piece together the parental financial problems, relationship troubles, secrecy, and lies that his mother reveals. But the story is constantly interrupted by Chris’s frantic phone calls and Tilde’s unhinged reaction. The story she tells is shocking – an adopted daughter is missing and the prime suspect is the girl’s father, and Tilde’s neighbor, Hakan. As we learn later, Tilde has personal reasons to jump to that conclusion: Her own father has not proven to be trustworthy.

Emotions drive this book. The suffocating intensity of the locale Daniel’s mother describes in Sweden, much like The Shining, draws readers into the claustrophobic paranoia without a chance of escape. Smith is the son of a Swedish mother and an English father and he writes descriptively and convincingly of the desolate Swedish winter. With little outside human contact and snowfalls making escape impossible, it is not surprising that the characters of the book go a little crazy – and the reader along with them. Daniel’s mother warns him: “A vast amount depends on you believing me, more than is fair to place on your shoulders. I’ll admit that with so much at stake it’s tempting to exploit our relationship and play on your emotions.”

The best mysteries are studies of protagonists and antagonists in challenging conditions, and Smith does not shy away from developing his characters. Daniel has to examine himself, the situation he has allowed himself to live in, and the lies he has told. He eventually travels to his parents’ farm to unravel the mystery, find the daughter, and save his parents. “The trip was a grand gesture, flamboyance concealing powerlessness and despair.” He sees the suffocating conditions his parents have been living under. He, too, is drawn into the deceptive actions of the mysterious Hakan. However, because he doesn’t share his mother’s history, Daniel can see the reality his mother can’t.

The Farm so impressed me, I quickly devoured the entire Child 44 trilogy. In that series, Smith describes a system of control that made citizens turn on each other and distrust their neighbors. That theme of paranoia is alive and well in this book. The Farm does not have the same must-turn-the-page charge as Child 44, but it is well-written and holds the reader’s attention. Halfway through the book, I knew whose story to believe, but I enjoyed the literary ride and had no desire to abandon the book before the end. After all, when you are lying to yourself, you tend to think everyone is lying and paranoia is everywhere. Just ask Jack and his family in The Shining.

JR Scrafford is a senior review editor for the Washington Independent Review of Books. She would love to venture to an isolated farm in Sweden and catch up on her reading.