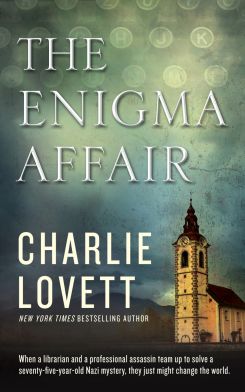 Of making books about Nazi villains, to paraphrase Ecclesiastes, there is no end. Perhaps readers will never tire of tales about subduing this particular evil, though as historical events slide from memory, the genre increasingly shifts to Hitler’s present-day heirs with restorationist ambitions.

The latest entrant in this strain of thriller is Charlie Lovett’s The Enigma Affair. It features a few reluctant loners, thrown together of necessity, who’ve come to possess an encrypted document decipherable only with an old German Enigma machine. They are being chased — to London to Munich to Prague to an old Italian monastery — by a clutch of bad Germans desperate to get their hands on the document, kill our heroes, and take over the world.

The document, it develops, will reveal the fruits of Projekt Alchemie, by which a small group of Nazis sought to turn base metals into gold. Written by Heinrich Himmler, head of the SS and Hitler’s number two, the document may tell where to find a vast hidden treasure.

This all sounds like high adventure, and much of it is — if only the story didn’t depend so heavily on loosely limned characters who play the game as second cousins of Jason Bourne. Their one-and-a-half dimensionality is apparent from the earliest pages, where, in rapid succession, we meet most of our heroes as shadowy figures with just the right profiles to collectively vanquish the foe.

Start with Patton, who, not for the first time, is being shot at on a Sunday morning while in her woodsy home in rural North Carolina making ganache-filled profiteroles that have just been ruined. Patton can think of three people who want to kill her. We readers can think of none (and don’t find out who the three are until the last fifth of the book, when they make an improbable appearance).

Patton is neither panicked nor shocked, but she is put out by her ruined pastry, not to mention the bullet holes that have pierced the meatloaf in her new $1,200 refrigerator (it’s hard to tell whether Lovett means to describe a high- or low-end appliance).

While the unknown shooter blasts away, Patton crawls to her bedroom safe and retrieves her Beretta M9. Things quiet down momentarily as another guy, Nemo, drives up in a truck, but he says he’s not the shooter, even though he’s also carrying a Beretta. Nemo tells Patton he’s stashed a third guy in a barn, but that guy (Fritz, or is it Franz?) may soon wake up from the tranquilizer dart that subdued him and reunite with a fourth guy (Franz, or is it Fritz?), his partner, who is walking up the road.

Though Patton does not yet know it, Nemo is in fact an assassin who has lived a solitary existence his entire adult life while moving from kill to kill. He talks Patton into trusting him, but only by surrendering his gun to her. In return, he insists she tell him about a fifth guy, Jasper, who may or may not be injured or dead somewhere nearby.

This means it’s time for a flash­back to the Munich home of Ingrid, a German do-gooder who, two weeks earlier, was wrapping an auto­graphed copy of a journal from the 1920s to send to Jean, the American grand­daughter of a previous owner of the journal who died at Dachau about 75 years before the refrigerator was being aerated.

Jasper has been carrying around a secret document for all that time, ever since he helped liberate the concentration camp in 1945. But that was then, and now the tranquilized guy emerges from the shed and blows the head off a “sweet, gentle, half-literate” deputy sheriff who happened by Patton’s home along with a seventh guy, the sheriff, because some other woman reported seeing intruders with guns.

We’re only somewhere around page 15.

Patton and Nemo decide to get out of Dodge in a hurry, and the chase is on, though not before the duo grab Jasper’s Enigma-encrypted document. Fritz and Franz follow Patton and Nemo, with murderous intent, across the ocean and into the heart of Germany. But first, our heroes stop by Bletchley Park, now a museum to the storied WWII British code­breaking headquarters, where they bump into an old friend of Patton’s who just happens to know how to run an Enigma decryption.

They also connect with an eccentric collector of Nazi memorabilia and then with Jean, an art-history professor who has separately come to Germany to track down Ingrid, and whose knowledge and skills will later be put to use in a Prague library.

Several twists follow, ending with an ingenious solution to all the problems that have piled up along the way, including a handful of psychological infirmities, a late-discovered turncoat, an explo­sion or two, a European police dragnet out for our paladins, and an independent band of killers. All in all, The Enigma Affair is entertaining enough to take your mind off things over a few late nights (especially if you’d otherwise watch bad television), but it’s unfortunate that the author didn’t follow his own lead in his previous The Bookman’s Tale, a bestseller that lavished light and life on far more plausible characters.

Jethro K. Lieberman is the author of Everything Is Jake (Three Rooms Press, 2021), a mystery, among many other books.

As in her novels, these short stories by a master chronicler examine the moral complexities of women’s lives through several decades.