The Ends of the World: Volcanic Apocalypses, Lethal Oceans, and Our Quest to Understand Earth's Past Mass Extinctions

A science journalist offers up a passionately researched book on a gloomy topic, but leaves space for hope. 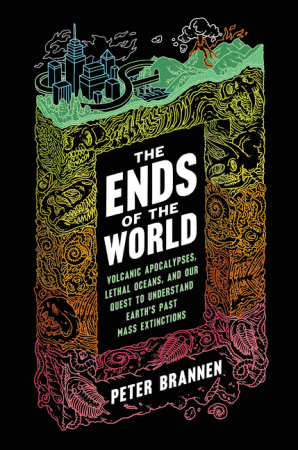 Do we really need another book about mass extinction?

Global warming and climate change have been topics in the news for decades. After The Sixth Extinction by Elizabeth Kolbert and Half-Earth: Our Planet’s Fight for Life by Edward O. Wilson, one might wonder what new lessons there are to learn.

Peter Brannen is convinced there is still more to the story. In The Ends of the World, the award-winning science journalist explores the five major mass extinctions, searching for the causes behind each one and how they relate to our environment today.

“In researching these ancient disasters, I expected to find a story as neat and tidy as the one about the asteroid that killed the dinosaurs. What I found instead was a frontier of discovery with much left to be unearthed, and a story still largely obscured by the fog of deep time.”

The author walks us through the End-Ordovician to the End-Cretaceous, describing flora and fauna and debating catastrophic events which contributed to the end of each. Through interviews with prominent geologists and paleontologists like Columbia University’s Paul Olsen, the University of Buffalo’s Charles Mitchell, and Princeton’s Lauren Sallan, and visits to fossil sites from Quebec to Cincinnati, the author carefully considers the effects of the carbon-silicate cycle, volcanic eruptions, asteroids, and the evolution of land plants. The book recounts over and over the dangers of carbon dioxide emissions while illustrating that it’s not just one thing that brings about mass extinctions.

Although Brannen’s initial focus is on past apocalyptic events, he does not dismiss the contention that we are presently in the midst of a sixth extinction. He has a keen interest in astrobiology, the study of life in the universe which investigates how life originates and evolves, and explores the environmental range necessary for life to continue. By studying the Big Five, Brannen attempts to discover how past events connect to the environmental changes we witness today.

The Ends of the World does not read like a science textbook. At times, it reads like a travelogue as Brannen imagines the lava flow that covered India and continents breaking apart and piecing back together like a puzzle. The writing has a certain lightness, a “Let’s see what we can find” about it. It is, after all, a “quest,” and Brannen’s childhood fascination with dinosaurs is clearly evident.

It is this enthusiasm for all creatures and his passionate curiosity that diminishes the book’s sobering tone. With pages filled with mosasaurs, plesiosaurs, pterosaurs, and the charismatic T. rex, it felt like reading Jurassic Park. Still, readers with little or no background in geology or paleontology might get lost in the maze of creatures and chronology of tectonic events — I did.

Photos and vivid illustrations of dinosaurs and fossils at the center of the book are both helpful and welcome. Who wouldn’t want to see what Dunkleosteus looked like, the killer placoderm “the length of a Winnebago”? Brannen’s colorful descriptions of visits to small-town museums and junkyard fossil sites also help lift us out of mass-destruction mode.

The final chapters of the book center on the End-Pleistocene, when humans enter the scene. The author quotes George Perkins Marsh, considered by some to be America’s first environmentalist: “The earth is fast becoming an unfit home for its noblest inhabitant, and another era of equal human crime and human improvidence, and of like duration with that through which traces of that crime and that improvidence extend, would reduce it to such a condition of impoverished productiveness, of shattered surface, of climatic excess, as to threaten the depravation, barbarism, and perhaps even extinction of the species.”

Here lies both a warning and a prediction of how the planet might look in the next hundred years.

Still, the author remains open to possibilities and is hopeful for humanity’s future on Earth and the galaxies beyond, a suggestion Trekkies will find exciting. If there is some comfort to be found, Brannen makes the point that geologic time is, well, a long, long time. So, if Earth is on the downswing, it’s going to take a while.

“Hundreds of millions of years still stretch before us on this planet, and the fact that we’ve survived all five major mass extinctions — that the earth has managed to support life for billions of years without being destroyed — might be an almost miraculous circumstance.”

The final pages of The Ends of the World take a surprisingly poignant turn. “I wrote a book about the mortality of the planet at the same time that someone I deeply loved died. My mom. This loss colored for me what was becoming a more and more gloomy evaluation of the prospects for humanity.”

There is no way to hide that The Ends of the World has gloomy overtones. Readers interested in earth science and the history of lifeforms will appreciate Brannen’s thoughtful and provocative approach, but if you’re gravely disturbed by a crack in one of Antarctica’s largest ice shelves and the U.S.’ withdrawal from the Paris Climate Agreement, you may want to pass. At least for a while.

Christine Baleshta is a writer living in Austin, Texas, who focuses on wildlife and the natural world. Find her on the Internet at www.christinebaleshta.com.