A tense military thriller proves hard to put down and impossible to forget. 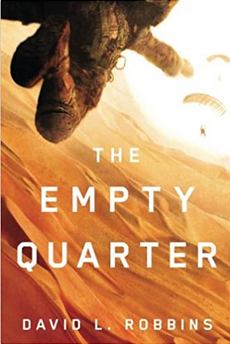 David L. Robbins doesn’t waste time. The Empty Quarter, his new novel in the PJ (Pararescue Jumper) series, opens during a rescue operation in Afghanistan. From there, it develops into the story of war, brotherhood, a kidnapped princess, and the PJs’ daring attempt to rescue her, but it never strays far from its tense opening pages.

It is during this first rescue operation that readers are introduced to the PJs, a team of American Air Force operatives whose mission is to slip into war zones and save embattled soldiers. The stakes in this firefight, for first-time readers of the series, may understandably appear low: The characters are introduced so quickly that, aside from a sense of patriotism or respect for the armed services, it’s hard to build empathy or concern for anyone. But this unfamiliarity fades as that initial operation ends and we learn more about the people who populate Robbins’ harsh world.

There are the PJs, chief among them LB, a former Army Ranger who has decided on rescue work as a way to repair his troubling past. We also meet Joshua Cofield, a former special forces soldier and current rising diplomat in the U.S. Embassy in Yemen, who becomes entangled in the kidnapping and is forced to rely on both his military training and diplomacy.

But Robbins doesn’t keep his focus solely on the Americans. The book takes us into the home of Arif al-Bahaziq, a former mujahedeen warrior, and his wife, Nadya, the daughter of a powerful Saudi prince. That prince, Hassan bin Abd al-Aziz, arranges to have Arif killed after a failed assassination that he blames on his son-in-law. Without giving away too much of the plot, this leads to Nadya’s kidnapping and the PJs’ eventual involvement in her complicated rescue.

Even though it may take a few pages for readers to become emotionally invested in these characters, Robbins immediately impresses with his command of military jargon, a mastery that leads one to believe it must have been learned firsthand (nothing in the author’s biography suggests this is the case, which makes it even more impressive).

This copious research isn’t limited to military operations. The conflicts and cultures of the Middle East are similarly studied and detailed. It is a great credit to his writing that the presentation of this information never slows the plot; Robbins is too skilled to rely on endless exposition. Instead, the story begins to trot, and then, as we get closer to the kidnapping, sprints. This rushed pace doesn’t relax, even during tender moments, such as when LB considers covering the wounded Nadya’s face in keeping with Middle Eastern modesty. Robbins shows a deft touch in weaving each character’s personal conflicts and allegiances as the action comes to a head. The Empty Quarter is a tough book to put down and, if you do manage to set it aside, impossible to forget.

Some readers might find a contemporary war novel that doesn’t call the act of war into question lacking. But that line of questioning doesn’t appear to be in Robbins’ interest, nor would it be of interest to his characters, who have already committed to their respective causes and to each other. There is some attention paid to the larger geopolitical issues that have plunged his characters into this drama, but Robbins focuses on the mud- and bloodstained boots on the ground.

The Empty Quarter is an exciting entry in the PJ series for Robbins’ readers, a great introduction for new fans, and a mesmerizing tale of duty and desperate love for everyone.