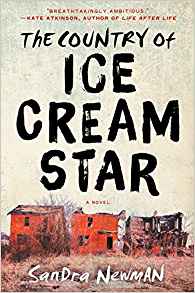 The mass appeal of dystopian fiction is no secret. With recent bestsellers and blockbusters drawing loads of attention, the genre is in an interesting place, stuck between retreading tired plots and giving us original moments that made us fall in love with these stories to begin with. Then experiences like Sandra Newman’s ambitious The Country of Ice Cream Star come along to challenge the status quo, displaying an astounding amount of care and craft for illustrating such a ruined society.

If you’re going into this novel thinking it’s more of the same, you couldn’t be further from the truth. You won’t find an evil government or noble rebellion in this world, and the usual dystopian politics take a backseat to the protagonist. Ice Cream Star is 15 years old. She’s third in line to lead the nomadic Sengles in the remnants of Massachusetts. Trading with the devout Christings and warring with the savage Nat Mass Army, this pseudo-society has scraped by in the eight decades since a mysterious pandemic, “Posies” — a virus that, generation after generation, claims the lives of youths at age 20 — wiped out America.

Posies is an unfair but accepted reality, until Ice Cream stumbles on a peculiar white man claiming to be much older than possible. Fearing this stranger, Pasha, yet suddenly hoping for a cure for her sick older brother, Ice Cream and her people embark on a quest through the uncharted Nighted States, unsure what they’ll find beyond the relative safety of their woods.

It’s not an easy read, and the content is only partially to blame. Ice Cream’s narration consists entirely of an extremely odd form of English. Since society’s fall, words and phrases have devolved into an almost unrecognizable pidgin talk. Dialogue can seem disjointed and unstructured, indecipherable at its worst and poetic at its best. It walks a thin line between the two that is, for the most part, successful.

Without a glossary to refer to, either you push forward or you’re left behind. Newman stands steadfast behind her invented language. I’ll admit it was off-putting at first, and I found myself rereading entire pages at a time to parse things together. You have to work for the meaning.

If you can learn the language, though, you’ll enjoy the uniquely beautiful and painful voices Newman evokes with it. She doesn’t shy away from darker themes, either. Ice Cream laughs and loves, but she is pushed into some horrible situations. She’s totally unprepared, strong, and willful, but still just a child, a fact I was painfully reminded of time and time again.

Like Cormac McCarthy’s post-apocalyptic epic, The Road, The Country of Ice Cream Star doesn’t bother explaining what exactly happened way back when. Details about the time before the pandemic are scarce, the facts obscured by myth. Instead, Newman concerns herself with showing the change.

Religion has been grossly, and humorously, reinterpreted. Strange superstitions have developed. Children scare each other with tales of white “roos” out in the wilds — grown men hunting unsuspecting kids. What remains of our culture appears on buildings and in names, on the “evac” notices posted around towns. Glimpses are doled out sparingly, offering up great teases along the way and adding an authentic feel to the experience.

I wouldn’t recommend this book to just anyone. Much of the standard apocalyptic fare is here, but Newman strips it bare and doesn’t waste time with a new coat of paint. It’s less formulaic and much more organic, exploring a very real setting with very real characters. The journey is gruesome, gripping, and intimate. The language alone challenged me on every page. But perseverance will be rewarded. What starts as a story about a young girl trying to save her brother quickly becomes so much more — an unsettling tale of pain, compassion, and the depths of love and desperation.

Joe Dell’Erba is a freelance reviewer here at the Washington Independent Review of Books. As a recent college graduate, he’s on the lookout for any professional excuse to read and write creatively every day. You can find him on Twitter at @jtdelle or discuss the joy of a good cup of coffee with him at jtdellerba@gmail.com.