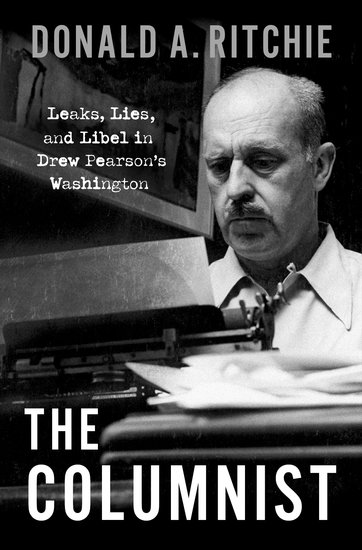 In The Columnist, Donald A. Ritchie has written a well-researched and important chronicle of the career of Drew Pearson. Ritchie, whom I know professionally, is the former historian of the United States Senate and has extensive knowledge of American political journalism in the 20th century. His other book, Reporting from Washington: The History of the Washington Press Corps, can be read in tandem with this one.

Pearson is a forgotten name to Washington’s current ambitious, tweeting generation. But from the 1930s into the Lyndon Johnson era of the 1960s, he was the country’s most powerful, hard-hitting, muckraking journalist, his column syndicated in 600 newspapers. According to Ritchie, “Pearson devoted his columns to uncovering inside information mixed with close-hand observations, strong opinions and moral indignation.”

Presidents from FDR to LBJ befriended him and disparaged him. President Truman threatened to shoot Pearson over smart remarks the columnist made about Truman’s daughter, Margaret. Senators and Cabinet members feared becoming a subject of his investigations, and socialites stepped carefully around him.

In his early years, Pearson was a vagabond reporter until he met Countess Felicia Gizycka, the daughter of Eleanor “Cissy” Patterson, the wealthy Medill family newspaper heiress. After a brief courtship, Pearson and Felicia married, and his mother-in-law paved the way for Pearson’s lucrative newspaper opportunities in Washington, DC. Although the marriage foundered, Cissy Patterson was fond of her former son-in-law and helped his career over the years.

Pearson began working in concert with journalist Robert Allen of the Baltimore Sun. Allen investigated congressional politics while Pearson trolled for scoops among the highest councils of government, especially the State Department. Together, they wrote the syndicated newspaper column “Washington Merry-Go-Round,” which started in the 1930s.

Having begun his career as a young huckster at his father’s Chautauqua tent shows, Pearson was adept at promoting the column. Allen eventually left, and Pearson became a one-man show after World War II. His cadre of “leg men” investigators included the dogged Jack Anderson.

In his columns, Pearson antagonized presidents with truthful leaked information, stood up to nasty generals like George S. Patton, and helped to bring down the demagogic anti-communist senator Joe McCarthy in the 1950s. Pearson often socialized with heads of state and loved to host Soviet officials.

The columnist imagined himself as a kind of back-channel diplomat and frequently sent notes to politicians supporting specific issues as if he were the Democratic whip. His involvement in national politics, often at the presidential level, was a mixture of outlandish ego and passionate patriotism.

But who was Pearson really? His story is instructive. Yes, he was a champion truth-seeker at a time — the post-WWII Red Scare era — when many journalists were reluctant to speak out. They feared antagonizing either an ever-watchful FBI or their Republican press owners. Pearson exposed grifters like Sherman Adams and Bernard Goldfine and revealed Attorney General Robert F. Kennedy’s electronic surveillance of Martin Luther King Jr.

He also attacked the Ku Klux Klan, especially after the bombing of the home of Fred Shuttlesworth in Alabama in 1956. As Ritchie writes, Pearson’ s “long career linked the old time muckrakers and the Watergate-spawned investigative reporters.” Despite Pearson’s many mistakes, Ritchie concludes, “the evidence confirms that he performed a public service by revealing how politicians and government really worked.”

On the other hand, there was a distasteful side to the man. Unlike many of the cerebral columnists of our era, who divine their stories from the entrails of today’s news, Pearson was a fierce combatant who believed in baring politicians and public figures even if it meant ruining careers and destroying lives. He was a Quaker, but that gentle, pacific religion did not restrain him from trafficking in innuendo and rumor mongering.

Pearson took special delight in reporting the sexual peccadilloes of his political and personal enemies. Among others, the columnist exposed General Douglas MacArthur, who kept an 18-year-old Filipina mistress in a Washington hotel.

Over the course of his career, Pearson was involved in more than 150 lawsuits and libel actions, although he lost only one. Ultimately, his influence gave way to a generation of television broadcasters. The Age of Drew Pearson became the Age of Walter Cronkite. Throughout his career, Pearson’s raison d’etre was “let the chips fall where they may.” Sometimes, however, for the sake of civic morality, not every chip needed to fall.

John R. Wennersten is emeritus professor of history at the University of Maryland, Eastern Shore. His forthcoming book is Strange Fruit: Race and Community Relations in the Chesapeake.