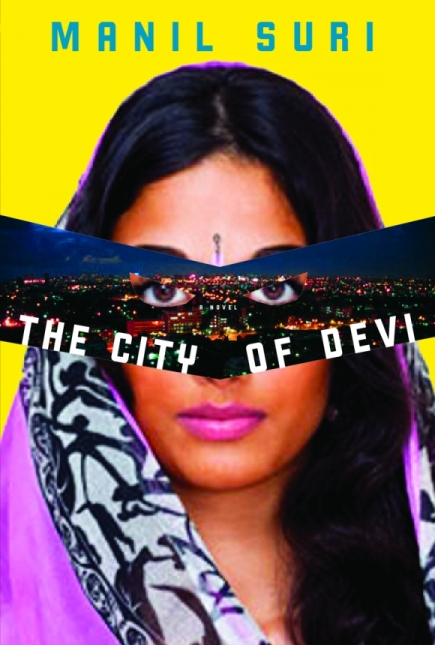 Sectarian violence is reducing the city of Devi to rubble, and those who are able to leave in search of safety have done so. The first narrator of Manil Suri’s novel, Sarita, would not flee with her parents and sister because she is going in search of Karun, her husband of two years. During that time, the marriage has never been consummated, although small steps — kissing, cuddling — have taken place. Sarita hopes that the aphrodisiac powers of a pomegranate will accomplish the desired result when she finds her husband. The second narrator, Jaz, who had been Karun’s lover for some years before the marriage, hopes Sarita will lead him to Karun and a renewal of their relationship.

Their story is played out against a backdrop of apocalyptic disaster. The book opens four days before an anticipated Pakistani nuclear strike against India. Terrorist attacks have occurred across the world, nuclear plants have melted down in Canada and the United States, dozens of planes have crashed in the Atlantic, and nobody knows what is really happening because the Internet is down and cell phones no longer work. Armed gangs of Muslims and of Hindus are marauding through the streets.

Sarita trades her wedding necklace for the only pomegranate she can find and takes shelter from an air raid in the Bombay Hospital. Sheltering with her are nurses, doctors and people from various walks of life. Religious animosities arise and result in the beating of a man thought to be Muslim, with even the doctors participating in the attack. As the mob tries to hang the man, it is discovered that he is, after all, Hindu. The crowd seeks a new victim and Jaz, who is Muslim, attempts to pass himself off as Gaurav, a Hindu. Sarita tries to save this man, who is a stranger to her, by saying he is her husband. A bomb explodes, and they both escape.

Sarita manages to get on a train heading north of Bombay, or Mumbai (as Sarita says, “some days I call it Bombay, other days, Mumbai”) where she hopes to find Karun at a conference of scientists. The train is attacked and crashes in a Muslim area. Jaz finds Sarita, and offers to help her get safely past the Muslim gangs as she had tried to protect him from the Hindu mob. Escaping various threats and encountering a variety of extraordinary characters, they make their way towards Karun. As we follow them, we learn from Sarita the story of her marriage and from Jaz, his pursuit of Karun and their relationship.

Both of the narrators describe themselves: Sarita has feared that, after having agreed to several matches that fell through before she could wed, she would be unmarriageable — too old, and with a second graduate degree, overeducated. Karun is, perhaps, her last chance. Jaz describes himself as “the Jazter” — a hunter of sexual partners. He literally pursues Karun through the trees, but when Karun trips and breaks his foot running away, Jaz takes him to the hospital, not to bed.

We see more than they tell us. Sarita is brave and determined. Although naïve about sex, she is capable of recognizing and valuing love when she encounters it. Jaz may be self-centered, but he is resourceful as well as kinder and more responsible than he thinks he is. We also see Karun through their eyes, and the image is remarkably consistent, no matter whether it is presented by Sarita or Jaz. Karun is shy, hesitant, sweet and decent, with a sense of fun, always the wooed and not the wooer. As they travel, Jaz manages to keep the unsuspecting Sarita from learning his true purpose in helping her.

The City of Devi is the third novel in Suri’s trilogy, which started with The Death of Vishnu and continued with The Age of Shiva. Religious tension, which was present in the first novel, but was not its major focus, becomes more important in the second, appearing mainly as the contrast between a secular, liberal outlook versus a rigid, superstitious and politicized religion. The City of Devi has nothing good to say about religion, as simple faith has been manipulated for evil purposes and fanaticism has led to massacres:

“Every group seemed to join in lustily, as if the national goal of religious integration had finally triumphed, and the bloodbath were a grand celebration of multiculturalism, of equal opportunity.”

Each novel in the trilogy is independent of the others in that each has different characters in different settings. They are linked more by themes, as all deal, in one way or another, with compassion and responsibility versus inhumanity, and with the adjustments people make — or fail to make — in order to live together, whether on a national scale, or in a small apartment house, a multigenerational family, or a marriage.

The first two pages of The Death of Vishnu proved that Suri can be a masterful writer, capable of encapsulating fear, weakness, responsibility and inhumanity in a brief description of a small act. In that book, his universe is seen in the lives of a handful of families all living in the same small apartment house. The Age of Shiva had a somewhat broader scope of time and space. Readers of those two books may be taken aback at the wild world of The City of Devi in which both public and private lives have spun far out of an orderly orbit of daily routine.

It is an angry book, as is the goddess Devi, who has “never been known for mercy.” At times, it presents absurdity amidst disaster. But since Devi is also the mother goddess who can create life, it is also a book in which love and understanding combine as a creative force.

Alice Padwe has reviewed fiction, history, and memoirs and has edited all sorts of books, from college texts to thrillers.

A brief but affecting illustration that we truly do choose our loved ones.