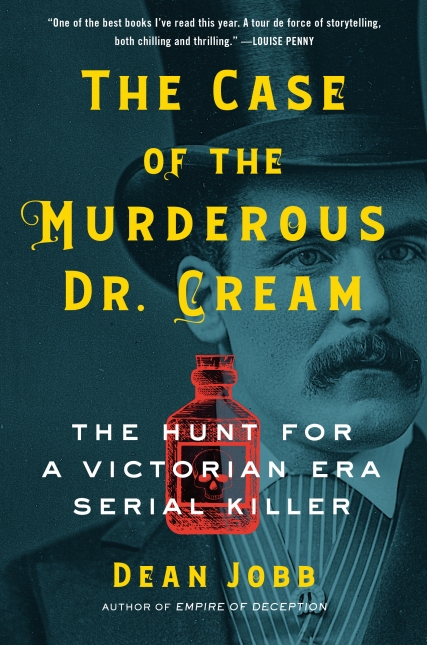 This is a book that tells in lurid detail the story of Thomas Neill Cream, a physician who practiced in England, Canada, and the U.S. at the end of the 19th century. He was also a serial killer — although that term was unknown at the time — responsible for at least eight, and probably 10, murders. All but one of his victims was a woman. He also attempted several other killings without success.

From the descriptions in The Case of the Murderous Dr. Cream, the titular madman appears to have had no motive for his actions other than the pure satisfaction of killing — murder for the sake of murder. Most of his victims were prostitutes, but evidence suggests that Cream chose them not because of their profession but because they were easy to get to.

Cream was born in 1850 in Scotland. Four years later, he and his family moved to Quebec. He spent most of his childhood in or near Quebec and did his medical training at McGill University in Montreal. He then practiced medicine in three countries and was viewed as an upstanding, moral gentleman. Colleagues and acquaintances thought well of him. He even taught Sunday school.

The story of law enforcement’s inept response to Cream explains why he was able to continue his homicidal quest over so many years. Repeatedly, police and courts failed to move against the doctor despite quantities of evidence of his crimes. While author Dean Jobb does not argue this point, my impression is that Cream was not aggressively investigated, in part, because he presented himself as such an honorable figure.

The book is organized around his victims. To each is devoted a chapter or so, more or less in chronological order. The comparison of Cream to Jack the Ripper is, of course, inevitable. But the Ripper, never identified or arrested, committed only five murders, all in 1888.

The author had the wisdom to intersperse the book’s many illustrations — some photos, some drawings — into the text at the point where the subject of the graphic is being discussed. The reader can thus learn from both the writing and the picture at the same time.

The amount of research that went into this work is impressive; Jobb cites multiple sources at the end of the book, including letters, newspaper articles, police records, autopsy reports, courtroom transcripts, maps, and street directories. “My goal,” he writes in his author’s note, “was to locate as many original records as possible, and this took me on a journey through the Canadian provinces of Quebec and Ontario, to Illinois, and, ultimately, to London” to search Scotland Yard archives.

The minute detail throughout the book reflects that meticulous research. For example, Jobb gives the dimensions of cell 45 on an upper-floor tier known as Murderer’s Row in the Cook County Jail in Illinois, where Cream was held during his first prosecution. The author also describes the fine points in Cream’s marriage contract with Flora Eliza Brooks, whom the doctor abandoned the day after their wedding.

He further gives a line-by-line review of the many legal inquests Cream was subjected to, and even reports on the rain pattering on the arched windows of the courthouse as a jury deliberated Cream’s fate in Belvidere, Illinois, in 1881. Convicted, Cream spent the next nine years and 273 days in the Illinois State Penitentiary at Joliet. A more final sentence would be imposed in London, in 1892, following Cream’s second murder conviction.

Dean Jobb succeeds here in what he set out to do: document in detail the career of a serial killer who somehow had everyone fooled. My reaction to The Case of the Murderous Dr. Cream was to find the ponderous, interleaved compilation of facts more than I wanted to delve into, but that’s personal taste. This is a book for those who enjoy precise and detailed study. In that context, it works splendidly.