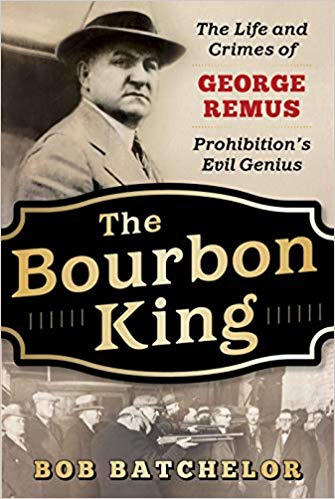 Forget Al Capone. Forget Bonnie and Clyde and Baby Face Nelson. Let us turn our attention, instead, to one George Remus, the Bourbon King of prohibition. Remus was not only a murderous scoundrel; he was a very intelligent murderous scoundrel who put together a massive booze empire and made a fortune.

And he got away with it until his own hubris brought him down.

Bob Batchelor’s The Bourbon King: The Life and Crimes of George Remus, Prohibition’s Evil Genius might as well be the outline of a Netflix or HBO series. George was born in Germany in 1876 and arrived with his adoptive parents in New York in 1882. They soon moved to Milwaukee and joined the large German community there.

His early life was typical of boys who grew up to become ruthless but successful men: His adoptive father was a ne’er-do-well who drank too much, worked too little, and abused his family. George left school early and went to work for an uncle who owned a pharmacy. George soon passed the exam and became a pharmacist but grew bored with that and went to law school. He was a flamboyant and successful lawyer who worked with the celebrated Clarence Darrow.

Along the way, he married a music teacher named Lillian, by all indications a loyal wife and mother. George tossed her aside for a gold digger named Imogene Holmes. That’s all you need to know to get into what this book is about.

Prohibition gave George an opportunity to use his two greatest skills: law and chemistry. Prohibition did not outlaw all liquor. It allowed alcohol for “medicinal purposes,” and the government issued liquor licenses to dispense “medicine.” George, who had to flee to Cincinnati to avoid some trouble in Chicago, found himself across the Ohio River from Kentucky, where America’s finest bourbon sat looking for a home.

He and the soon-to-be-infamous Imogene were married and set up housekeeping in a mansion paid for with the piles of cash that George was making from his operation, which covered most of the Midwest and even the East Coast.

As the author points out many times, George sold only the “finest whiskey” in a time in which bathtub gin and lethal alcohol were being sold as the real stuff:

“Remus hired people and procured machinery, from automobiles and trucks to bottling machines. He also began a far-reaching bribery network, trading cash for insider information, protection and secrecy. He needed police officers, railroad workers and more on his side.”

What followed was bloodshed, shootouts, payoffs, despicable characters, and huge amounts of cash.

George bought Kentucky distilleries that were on the verge of bankruptcy and produced “medicinal” liquor, which found its way to countless speakeasies. One of his clients was Capone. The money rolled in. He lived a lavish lifestyle and bought Imogene jewels and furs. The couple purchased so much valuable furniture and artwork, they had to store it in the attic.

Then came the reckoning. A woman named Mabel Walker Willebrandt was named by the attorney general of the United States to oversee the Prohibition Bureau, and she set her sights on George Remus. She could not be bought.

George went to prison. While he was locked up, he made the mistake of giving control of everything to Imogene, who promptly began an affair with a federal agent. The rest of the book is about how George attempts to come to terms with Imogene’s betrayal. His millions vanished, along with the jewelry and artwork. The book gets bogged down in sometimes mind-numbing detail as Batchelor recounts the back and forth during the long, bitter, and ultimately violent process of uncoupling.

George had a temper. He also had a gun. He and Imogene had a court date on a bright October morning, a court appearance he did not want to happen. Imogene and her daughter stepped out of a hotel, and George followed. There was a car chase. He caught up with her, put a gun to her stomach, and fired. She died a short time later.

George told police, “This is the first peace of mind I’ve had in two years.”

The trial was a national sensation. It had all the elements needed to sell papers. Greed, lust, infidelity, bloodshed, big money. George, the experienced trial lawyer, used temporary insanity as a defense and presented himself as a wronged man, a man betrayed by his wife and a despised G-man.

As the newspapers breathlessly covered the trial and the lurid testimony, George convinced the jury that the real scoundrel was the man who stole his wife. He was found not guilty, even though there was no doubt that he had killed Imogene.

George Remus, the Bourbon King of Prohibition, lived to age 79 and died in 1952 in Covington, Kentucky, the state that had made him rich.

Mabel Walker Willebrandt, the woman who sent him to jail, quit the government and made a name for herself as a private attorney in California, where she helped a winemaker circumvent the Volstead Act, the law making alcohol illegal.