The Age of Acrimony 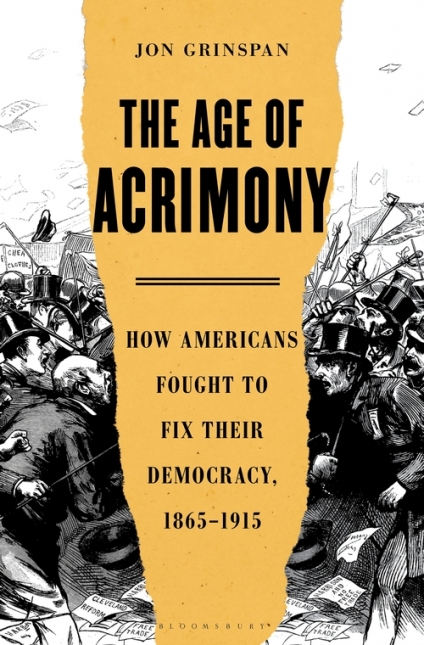 The Age of Acrimony is an apt title for the combustible years of 1865-1915 when, according to the book’s subtitle, “Americans Fought to Fix Their Democracy.” That 50-year battle during Reconstruction and the Gilded Age bruised the country and left wounds we feel to this day. Jon Grinspan, curator of political history at the Smithsonian’s National Museum of American History, creatively tells the story by wrapping the incendiary era around the lives of a Philadelphia congressman and his activist daughter.

The congressman, Rep. William Darrah Kelley (1814-1899), a lifelong abolitionist, abhorred slavery. In fact, Kelley’s opposition to slavery forced him to leave the 19th-century Democratic Party and travel to Ripon, Wisconsin, where he and other Northern congressmen formed the Republican Party.

His enemies called him “Pig Iron Kelley” because he represented the iron and steel districts of Pennsylvania as a fierce protectionist who always voted in favor of tariffs to shield the industry from foreign competition. His enemies called his daughter, Florence Kelley (1859-1932), a labor activist of stern demeanor, “that fire-eater in the black dress.”

Rep. Kelley arrived in Washington, DC, at the same time Abraham Lincoln moved into the White House. The new president enjoyed meeting the new congressman because he could look him in the eye. The men, both long, lean, and lanky, became friends. Both were part of a new breed of “low-born but driven politicos,” replacing “the elite antebellum statesmen who had been born to be senators.”

Both also belonged to an era when most Americans could get on a train “and tell, at a glance, how their fellow passengers would vote. Race, class, region, religion, occupation, ethnicity, even a style of hat or preference for [alcohol] all indicated Republican or Democrat.”

In those years, rural evangelical Yankees, Protestants, and upwardly mobile professionals who sipped whiskey in bars and wore snap-brim hats were Republicans, while Democrats were immigrant Catholics from the South who wore newsboy caps and drank ale in beer joints. They were the “stupider” party, “half Ku-Kluxer, half Irish-rioter.” Republicans were “moralistic crooks.”

Congressman Kelley, the abolitionist, represented Philadelphia, Pennsylvania, where Blacks enjoyed the same nonexistent voting rights as their counterparts in Philadelphia, Mississippi. He also supported industrial laborers and women’s rights, but became famous for “speechifying,” the ticket to his national recognition.

He didn’t simply make speeches; he played bass, trumpet and trombone in his own orchestra of oration, riveting audiences with his “graveyard eloquence” and “cemetery roar.” Having been born into poverty, “He shouted his way to wealth” and built a mansion for his family called the Elms. Ironically, the man whose mesmerizing voice had roused thousands died from cancer of the jaw, tongue, and throat.

Kelley grew up with little formal education, having had to work all of his young life for wealth and position. His daughter grew up with all those privileges but, while she embraced her father’s progressive politics, she lacked his charisma.

When Florence was accepted for advanced study at Cornell, she bragged that she’d been “relieved of the burden of the stupids.” An intense young woman, she intimidated guests when she accompanied her father to Washington parties. One journalist wrote, “The young girls in society were just a little afraid of her; the young men were not entirely at ease in her presence, and old legislators were very careful about statistics when talking to her.”

In April of 1865, President Lincoln asked Rep. Kelley to join the delegation to Fort Sumter to mark the end of the Civil War. “All was bright and beautiful and cheerful,” the congressman recalled of the trip. Then, en route to Washington, his ship passed a small boat whose captain shouted: “Why is not your flag at half-mast? Have you not heard of the President’s death?”

Grinspan describes the nation’s capital during those years as “a town of neighborhoods named Swampoodle and Murder Bay, centered on a National Mall fringed by a filthy canal, which stank like ‘the ghosts of twenty thousand drowned cats.’” Despite its stench, Washington, DC, held an allure no other city could match:

“New York had finer food, Boston had wittier writers and San Francisco had superior saloons, but Washington had power. And that power attracted, if not the wealthiest or the wisest, those most burning for place.”

Among those with aching ambition was William Jennings Bryan, renowned for his “Cross of Gold” speech; Lincoln Steffens, who revolutionized journalism; and Theodore Roosevelt, the first activist president, who most changed America in the years 1913-1920.

Not all historians write with the verve and dash of Grinspan, whose titles snap, crackle, and pop: “Where do all those cranks come from?” and “Reformers who Eat Roast Beef” and “Investigate, Agitate, Legislate.” For the most part, the chapters flow with narrative flair. For example, “Streetcar Number 126 wobbles its way up Lancaster Avenue into West Philadelphia” starts his foray into the central issue of the Gilded Age, which was not class, race, industrialization, or immigration, but rather the political paralysis that made addressing those issues impossible.

It’s disheartening to read that the endemic voter suppression of 1892 lives on into 2021. (See current news coverage of the white, male legislators in Georgia who signed a bill behind closed doors to restrict Black voters.) The social and economic upheavals of more than 100 years ago, plus the searing political partisanship that undermined faith in democracy at that time, are all too recognizable today.

Yet Grinspan’s history of the era does not despair for democracy. In fact, he pummels Rudyard Kipling (1865-1936), the English writer born in India who visited America and left with disdain, saying democracy was rotten and the U.S. was doomed by bars full of “strong, coarse, lustful men.” Grinspan, marshaling arguments to the contrary, proves Kipling’s facts unfounded and concludes: “America digested the famous writer and expelled him out its other end.”

Grinspan contends that 20th-century democracy has grown more reasonable, more enlightened, and more transparent. “The tribal, nearly biological view of partisanship, and demonization of the rival party as ‘enemies of the human race’ has weakened.”

Hmm. Reading that in 2021 while still feeling the whiplash of Donald Trump’s presidency, one might wonder but still take hope in the author’s conclusion that our democracy is elastic, “with plenty of room for ugliness without apocalypse, and for reform without utopia.”

An analysis of Western accountability for Asia’s “missing” girls.