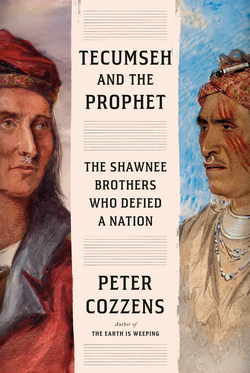 Peter Cozzens’ Tecumseh and the Prophet offers fresh insight into the injustices the United States visited upon its Native population. The author is well positioned to tell this story, having written or contributed to 16 books focusing on 19th-century American history, including the five-volume Eyewitnesses to the Indian Wars.

While Cozzens provides the viewpoints of combatants from both sides of the struggle, he focuses primarily on the Native American cause, helmed by Shawnee political and military leader Tecumseh and his brother, the spiritual leader Tenskwatawa.

Born in the decade prior to the Revolutionary War, Tecumseh grew up in tandem — and in conflict — with the new nation. From his birthplace and home in the Ohio and Northwest territories, he had a front-row seat to American expansionism, the “manifest destiny” that ran straight through tribal lands and roughshod over Native territorial claims. His lifelong goal was to establish a confederacy of indigenous peoples with the strength and numbers to counter his land-hungry white neighbors.

Tecumseh’s partner in this work was Tenskwatawa, whose proselytizing was the religious counterpart to Tecumseh’s political and military aims. Tenskwatawa came to his spiritual zeal late in life. In his youth, he lived as a drunkard and layabout who once became so intoxicated he was left for dead.

Tenskwatawa approached his divine awakening with as much fervor as he did his prior hedonism and implored other tribes to join him in rejecting Western religion in favor of a Native faith. Such a faith, however, would need to overcome longstanding mistrust among the myriad tribes comprising the Native nation. Some had even embraced the white people’s Christianity, whether by force or simply from a desire to get along.

The Shawnee of Ohio, the Delaware of northern Pennsylvania, the Iroquois of New York, and others didn’t just embrace differing belief systems, they faced diverse political and military challenges in regard to their relations with the United States. Some tribes traded freely with the newcomers and lived more or less harmoniously alongside them. They saw no gain in overturning a mutually beneficial (albeit temporary) truce. Others were in a state of perpetual war.

When war comes, Cozzens is clear as to who the transgressor is. Good feelings could not last forever, given the United States’ growing population and hunger for land. Through a series of exploitive treaties, from the 1795 Treaty of Greenville to the 1803 Treaty of Fort Wayne and 1804 Treaty of St. Louis, the U.S. government stole land (not always from its actual owners) for pennies on the dollar.

Fans of Westerns and war tales will enjoy Cozzens’ detailed descriptions of the battles that resulted and Tecumseh’s and Tenskwatawa’s roles in them. One notable conflict depicted is the Battle of Tippecanoe (from which William Henry Harrison later drew his presidential campaign motto). Broken alliances, brilliant stratagems, and reports of daring raids pervade the author’s recounting of the conflict. Cozzens also provides compelling details of how, after this fight, U.S. troops extinguished the Shawnee camp at Prophetstown in hopes of putting an end to a pan-Indian alliance.

Natives had one last critical alliance to rely on, though. As the War of 1812 dawned, British forces were able to engage the Native population as natural allies. Indeed, the Brits’ promises of support for Native independence drew tribes together for one unified push to repel the American settlers. In describing this war, Cozzens does a fine job with a difficult task: stirring the American reader to root for the enemy by focusing a bright light on our country’s crimes against the Natives.

Cozzens also paints Tecumseh as both a skilled warrior and an able diplomat who worked diligently to pull together the various tribes. He provides many examples of Tecumseh’s skill at maneuvering his smaller contingent against a larger American force, and also points to many occasions when Tecumseh, with Shawnee nobility, steps forward to prevent the abuse of prisoners his own warriors have taken.

The strength of Cozzens’ book is his ability to bring to life the thrilling adventures of Tecumseh and his people. Many a war yarn gets bogged down in minutiae, but the author animates these battles by sharing the human stories behind the fighting. By ably piecing together a history that is equal parts engaging and amply sourced, Cozzens has crafted a satisfying work that leads us to sympathize with his subjects without putting his finger on the scale to prove his point.