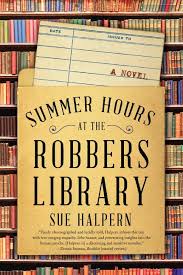 Do people come into our lives for a reason? Are they sent to us by some benevolent force — perhaps the universe itself — to help us heal each other in times of need and to create intentional families when our “real” families fall short? It’s a comforting notion, and certainly one that has inspired countless authors of fiction, film, and even animation.

One of the most popular iterations of this theme is the one about the curmudgeon’s cold heart slowly being thawed by a lonely child, and it is this version that lies at the center of Summer Hours at the Robbers Library.

The story, which shifts across multiple timelines, begins with the description of a young couple’s “meet cute,” their off-kilter courtship and eventual, disquieting road to the altar, despite the ambivalence shared by Kit, the bride-to-be, and the reader.

The evolution of this relationship is revealed in a so-called Marriage Story — an autobiography-within-a-book — that Kit, the present-day, now-divorced protagonist, divulges in bite-sized pieces throughout the story. Something went drastically wrong, we are given to understand, our only clues meted out in flashbacks to therapy sessions where Kit recalls her struggle to recover from an unnamed but repeated trauma.

“Trauma is not just one thing,” Dr. Bondi had to remind her. “It lodges in our reptilian brain. It’s insidious that way.”
“Tell me about it.”
“Sarcasm helps, believe it or not,” he said.
“Well, at least I’ve got that going for me,” Kit said.

Most of the book involves this older, reclusive Kit, who has changed her name and hidden from the world in a tiny-but-cozy library in a New England manufacturing town that has seen better days. We know she’s afraid of life, that she’s licking her wounds and that she’s determined not to let anyone make her vulnerable ever again, but we don’t, as yet, know why.

Enter Sunny, Kit’s deus ex machina in the form of a 15-year-old girl who, as her name implies, is uniquely qualified for the role. For Sunny, who has been “no-schooled” by her hippie parents, is assigned to spend the summer working at the library as penance for having stolen, of all things, a dictionary.

A dictionary thief and a librarian? Surely a match made in heaven, although it takes us awhile to get there. To make Sunny believable — why on earth does a teenager steal a dictionary instead of, say, an iPad? — we are told that she doesn’t have a phone, eat meat, watch TV, or visit doctors, all because of her parents’ quixotic philosophy on childrearing.

For want of these distractions, Sunny is enamored of books. She also becomes inexplicably drawn to antisocial Kit, presumably because her own parents are too self-involved to see her for the endearing person she has become — a young girl whose unorthodox upbringing has done nothing to dampen her innate resilience and optimism. She’s even able to forgive her mother’s shortcomings as their little family unit ricochets toward its own trauma.

“I think it’s possible that when you think that the future might bring great sadness, you become more generous than you ever had been before, so you can carry other people’s happiness with you.”

The plot also includes a budding if unlikely love interest in the form of Rusty, a former finance wizard and NYC fat cat who, because of the financial meltdown, finds himself in the hinterlands rediscovering the joys of the simple life as he trades his taste for fast cars and beautiful women for the elusive charms of a down-at-the-heel town and a cranky middle-aged librarian.

There is some interesting geometry in this book: Kit, Sunny, and Rusty form a trio; Sunny and her off-the-grid parents make up their own troika; and the lovable old geezers who visit the library and befriend Rusty are known by one and all as the Four.

The story unfolds at a leisurely pace, as we, along with Sunny and Rusty, struggle to find out what the heck is wrong with Kit, who is not so much an unreliable narrator as a terse one. When at last the final chapter of her sad Marriage Story is revealed, along with an explanation of the attendant trauma, the pace suddenly speeds up and the denouement feels both rushed and not quite satisfying.

All that said, the characters are engaging, each in his or her own way, and readers will root for the happy ending they hope the benevolent gods will send their way.