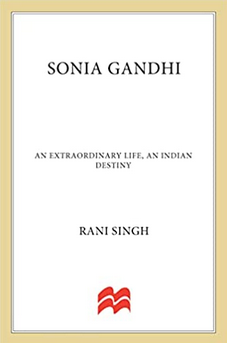 Gandhi. The name for many evokes Mahatma or Indira, but Rani Singh’s new book isn’t about them. It is about one of India’s current political leaders, Sonia Gandhi. Rani Singh, a London-based journalist, brings her investigative skills to this remarkable story of an Italian schoolgirl who went to England, met a boy, married him and instantly became a member of the Nehru-Gandhi family dynasty.

When Sonia Maino met Rajiv Gandhi in a Cambridge restaurant, it was love at first sight for both. “I just wanted Rajiv,” said Sonia. “I could have gone to any part of the world for him. He was my biggest security.” Before the pair married, they had to endure a one-year separation imposed by Sonia’s father, who did not want his 20-year-old daughter moving across the ocean and marrying a foreigner. But that’s just what she did.

In a matter of weeks, Sonia went from living in a small Italian village with her parents to living in New Delhi with her mother-in-law, Indira Gandhi, at the prime minister’s residence. Indira Gandhi took her new daughter-in-law under her wing and helped shepherd her through the transition to a new culture, language, and lifestyle. Sonia was determined to immerse herself into her new homeland and she did that by giving up her old one. As Sonia said, “I decided that my roots had to be properly embedded in India. …  This would be possible only if I severed all contacts with Italy.” Once Sonia achieved that goal she reconnected with her Italian family.

The first part of the book examines Sonia’s childhood and idyllic family life with Rajiv and their two children ― but the fairy tale comes to a sudden end. Like the Kennedy family, the Nehru-Gandhi family produced a political dynasty and suffered an excruciating amount of pain. In Part II, Singh describes the death of Rajiv’s only brother, Sanjay, in a plane crash, and the even more devastating assassination of Indira Gandhi by one of her bodyguards. India lost the woman dubbed the mother of the nation, and Sonia lost a mother-in-law, mentor and confidante.

In the wake of his mother’s death, Rajiv was asked to step up to the political plate, and he did, becoming the youngest prime minister of India, at the age of 40. Sonia did not rejoice. Instead, she feared her husband would meet the same violent fate as his mother. He did, assassinated by a bomb blast that was so powerful it tore his body apart and emotionally shattered his wife of 23 years.

The second half of the book chronicles how a grief-stricken Sonia Gandhi gradually entered a life of politics as the politician, not the spouse. According to Singh, living with Indira was “the best political kindergarten Sonia could have had, and she absorbed everything osmotically, even though she was never interested in being a politician.”

Sonia’s foremost interest was preserving the legacy of her husband. She did so through the establishment and chairmanship of the Rajiv Gandhi Foundation, which espoused his vision for a new India through science, technology, literacy and an emphasis on the future ― the country’s youth. The Indian National Congress, the party of Rajiv, Indira and Indira’s father, Jawaharlal Nehru, India’s first prime minister, was desperate for a Nehru-Gandhi to lead and tried to recruit Sonia into the family business. As Sonia recovered from her loss and gradually built up her confidence, she answered the call of the party, not by choice, but to advance the ideas of her husband.

The irony is that for more than a dozen years of marriage, Rajiv and Sonia led a quiet life out of the spotlight. He was an airline pilot and she ran the household. When Rajiv’s brother died suddenly in 1980, the political torch was passed to Rajiv. This was the first time there was tension in the marriage. Sonia was a reluctant political spouse, but once again adapted. She traveled the countryside with her husband and demonstrated an innate ability to connect with people. This skill served Sonia well, as did her years of playing host to world leaders first, when Indira was prime minister, and later, when her husband held that position.

Mikhail Gorbachev was among the first political leaders Sonia met once her husband assumed his role as prime minister. The friendship that emerged between the Gorbachevs and Gandhis is recounted in Gorbachev’s foreword to the book, as is the reluctance of both Rajiv and Sonia to be on the world’s political stage.

One wonders if it was Sonia’s lack of desire to become a politician that gave her the luxury to step down at will. She did that twice when opposition about her not being a native-born Indian became deafening and unproductive. While Sonia’s opponents have used her Italian roots against her, the people of India have always embraced her, and the Indian National Congress has relied on her to rejuvenate the party and the voters.

Sonia’s rebirth and the development of her political prowess, first at the Rajiv Gandhi Foundation and then leading the Indian National Congress, comprise the last two parts of this six-part book. For those who are novices at Indian politics, Singh does a good job of weaving an understanding of India’s political structure and key players into the narrative.

What’s most remarkable about this book is that it is about a powerful contemporary figure, but one with whom most Americans are not familiar. Since India, with a rapidly growing population, is expected to surpass China as the most populous  nation in the world, it’s vital that the story of Sonia Gandhi and her leadership is understood as India becomes a key player in atomic energy and its economy continues to expand globally as the class divide within India widens.

Amy Schapiro is the author of Millicent Fenwick: Her Way. Schapiro’s next book is Leading Justice: The Life of Nicholas deBelleville Katzenbach.