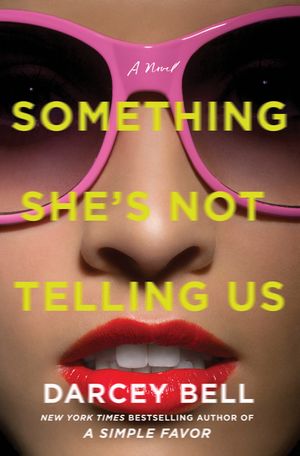 I once read that publishers often signal a book’s marketability to women by ensuring the color pink figures prominently on its cover. Darcey Bell’s second novel, Something She’s Not Telling Us, features a close-up of a woman wearing pink sunglasses.

The image has nothing to do with the story, so I suspect it is there to announce that this is a woman’s novel. If so, the publisher has done Bell a disservice and insulted the reading public. Bell has crafted a psychologically intricate and suspenseful book that should appeal to readers (regardless of gender) who love a well-written tale involving complex characters and engaging plotlines.

Charlotte and Eli have an ideal life. He is a former stock trader who’s made enough to retire and indulge his passion for theatrical set design. Charlotte is a floral designer with her own increasingly successful business. They own free-and-clear a spacious New York City loft. And they have Daisy, their precious 5-year-old daughter.

But Charlotte suffers extreme anxiety, especially with respect to the welfare of Daisy, who has developed asthma. Charlotte sees a therapist regularly.

Charlotte has a younger brother, Rocco, who is in recovery from alcohol abuse. His life has been chaotic, punctuated by a series of relationships with unstable and unreliable women. Previous girlfriends include a kleptomaniac who stole Daisy’s favorite stuffed animal. He has a steady job for the first time in years and a new girlfriend, Ruth, who may be “the one.”

Ruth is living with her grandparents after losing her personal-assistant job with a demanding celebrity chef. She is immediately attracted to Daisy, who is uncharacteristically drawn to Ruth, too, raising Charlotte’s anxiety level even higher.

Rocco’s drinking problem is exacerbated by his relationship with his and Charlotte’s mother, who may have tried to kill him years earlier when she burned down the family home. After her release from prison, she relocates to Mexico.

Readers learn this backstory in the opening pages. The narrative kicks into gear when Charlotte goes to get Daisy one day after school, only to learn that Ruth has already picked her up. Why would Ruth do this? Where did they go? And who was that man with her? Where is Rocco? These are the questions that drive the story, but the answers are not provided in a linear manner.

The narrative is related in alternating chapters among Charlotte, Rocco, and Ruth, and with a shifting timeline reminiscent of “Pulp Fiction.” Consequently, readers must stay on their toes to keep the plot and timeline straight.

Adding to the disorientation are the shifting tenses and points of view: Charlotte’s and Rocco’s stories are told in the third-person present, while Ruth’s is told in the first-person present. This takes some getting used to but is eventually overcome by the engine of the story.

One of the best scenes in the book is set in Mexico, where the family visits Charlotte and Rocco’s mother on her birthday. The dinner is a disaster. An argument breaks out, all of the guests leave before the mariachi band arrives, one guest is brutally assaulted later that night, Ruth loses her passport, and she and Rocco are left behind in Oaxaca. How these incidents relate to Daisy’s disappearance are revealed by the novel’s end.

One plot point that isn’t satisfyingly explained is a crime Ruth recalls happening six months before in her grandparents’ neighborhood. A young mother rehabbing a brownstone dies a tragic death that eerily presages an event in the present. Is it the same event? If so, how can that be?

Charlotte’s anxiety over Daisy, though understandable, gets to be wearying. Rocco’s self-pitying nature and hapless romances do little to endear him. And Ruth is a cipher. Are we to trust her first-person narration, or is she not telling us something?

All of these characters have secrets that could be life-shattering or life-ending. But in the end, there is a startling moment of compassion that feels wholly satisfying.

Terry Zobeck received a Ph.D. in anthropology from the University of Tennessee. He is a substance-abuse researcher and policy and budget analyst with the federal government. In his off hours, he is an avid book and music collector. He is the author of A Trawl Among the Shelves: Lawrence Block Bibliography, 1958-2020.