So Close to Home: A True Story of an American Family’s Fight for Survival During World War II

A lightly fictionalized, little-known tale of disaster at sea 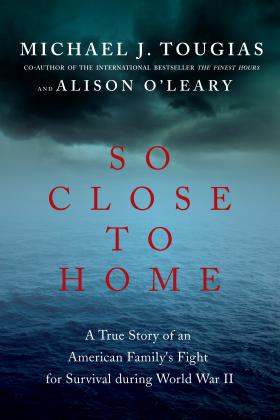 A thrilling story of courage and eventual good fortune, this historical narrative recounts one Texas family’s near-disaster at sea within a larger, relatively unknown bit of World War II history.

To improve their fortunes, Ray and Ina Downs move their family of three children to Colombia and then to Costa Rica for Ray’s lucrative temporary job with the United Fruit Company. The oldest child, 14-year-old Terry, soon returns to the U.S. Lucille, then 11, and Sonny, 8, stay with their parents until the end of Ray’s contract.

While sailing home on their return trip from Costa Rica, just miles off the coast of New Orleans, their ship, the Heredia — an old freighter originally built as a luxury passenger ship; the Downs family is among the small number of civilians aboard — is attacked by a German U-boat. It is May of 1942, and America is still recovering from the Pearl Harbor bombing that led to a declaration of war against Japan’s ally, Germany, on December 11, 1941.

The ship sinks quickly and violently. Ray and Sonny end up on a tattered raft with two other men. At first, the whereabouts of Ina and Lucille are unknown.

The authors’ genius is in timing the shifts of focus, thereby heightening suspense. While most chapters follow the fortunes of the desperate Downs family, these are alternated with chapters that focus on the U-boat enterprise. Readers receive well-rounded portraits of Admiral Dönitz, overlord of the German “Grey Wolves” (as these submarines were named), and of the commanders of the two subs that unexpectedly and programmatically destroyed many ships nearing the southeastern U.S.: “The U-507 and U-506 were the perfect vessels to send into the Gulf because they were of the larger, long-range class called Type IXC, both built in 1939 in Hamburg.”

These U-boats had enormous range, and they usually carried 22 torpedoes along with other weapons, including anti-aircraft guns that were mounted on deck. They also had skilled, committed commanders whose training was exceptional: “Those on U-boats sent to American were the best of the best, on a new mission that might decide the outcome of the war.”

Commander Harro Schacht controlled U-507, the first U-boat to enter the Gulf of Mexico. Tougias and O’Leary develop a vivid personality sketch of this capable leader and record his many successes sinking ships in Gulf waters.

Erich Würdermann, the commander of U-506, receives similar treatment. Clearly, the authors are impressed by these two dynamic individuals who found themselves in an unusual competition. Was it the number of ships destroyed or the tonnage of cargo rendered useless that would be the measure of superiority?

The other side of the story, of course, is the dismal preparation and performance of U.S. forces. Why were they unavailable or unable to protect these commercial vessels, whose cargo was important to the war effort? How well was the U-boat threat recognized? On many of the freighters in the region, the lives of U.S. citizens were in jeopardy. Citizens like Ray Downs, his wife, and his children.

As the authors continue their narrative of the dreadful day when the Heredia was torpedoed, they do an excellent job of bringing the characters to life. This individualization of the people involved, here as well as elsewhere in the book, comes in large part through the kind of dialogue one often finds in historical fiction: dialogue that has license to create conversations among both historical and invented figures. But where did Tougias and O’Leary find words for Sonny, Ray, the Heredia’s captain, another passenger on the raft, and so on? What about the conversations that convey the experiences following rescue?

The answer is through creative shaping of the public and private materials, written and recorded, that are credited in their bibliography. This ordeal and rescue story was fodder for newspapers, and many interviews with the participants followed their safe return. Later interviews, private memoirs, and letters provide language for additional “voicing” of the experience. The authors handle these sources in ways that provide plausible, if not always actual, conversations.

For the commanders of the U-506 and U-507, their war diaries provide records, both factual and evaluative, that the book’s authors exploit with skill and dramatic pointing. So Close to Home offers a harrowing adventure story at sea, a surprising recovery of frightening historical material that had been shrouded in obscurity, and an unexpected, humanizing look at the enemies — the U-boat commanders — who turn out to be quite different from the conventional Nazi monsters of most WWII representation.