This witty collection explores how it is we fit into our own lives. 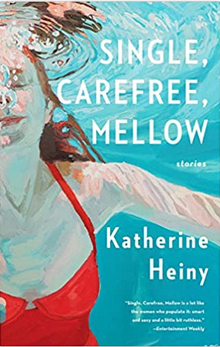 Katherine Heiny’s collection of new and previously published stories will leave you laughing and crying, like a late-night conversation with your best friend over a pint of mint chip. Although three of the tales involve the same character, the collection depends more heavily on theme and voice to tie it together. And, oh, does the voice work.

Heiny’s masterful details make us feel like we know these people. Ridiculous observances immerse us in their world. Two friends at a bar notice a sign for cream of potato soup. “She’d rather shoot herself than eat anything served here, and Sasha says it’s so disturbing that the word potato is in quotes, like maybe it’s not made from real potatoes, and Monique says it almost certainly isn’t.” The thread goes on in this Seinfeld-esque way, and the reader finds herself saying, “I know these women. I think I might be one of these women.”

Adultery is woven throughout most of the stories, which could become overbearing or heavy-handed, except that Heiny’s use of self-conscious humor keeps you turning the pages and identifying with characters even when you want to shake them and ask, Can’t you be serious for a moment?

Just when you start to question whether the author has gone too far with the casualness, a bittersweet moment of reflection occurs and tempers the gritty flippancy. Sasha, in “The Dive Bar,” wishes “not for the first time, that life did not have to be a continuous series of eliminations…a long series of choices in which you were always unhappy that you couldn’t choose two things at the same time.”

Heiny often surprises with ironic juxtaposition. In “Andorra,” one character thinks about her lover to get through an awkward work dinner. “She held the thought of Marcus in her mind, like a Saint Christopher medal, or a dream catcher, or maybe just a hidden flask of whiskey in her purse — something that made survival possible.” You feel like you’re in on the joke.

There’s an intelligence underlying these women’s stories that makes you say, Aha, there’s the heart of her. In “Blue Heron Bridge,” writes Heiny, “David laughed and looked at her, and Nina got the sense she sometimes got when she said something funny, that she had suddenly become visible.” It feels like a truth that pushes aside the dirty dishes cluttering the table and lays itself out for display.

Heiny shows characters’ acceptance of the pain and humor that often mix in life, and that become inevitable at some point during an affair. Whether it’s the exhilaration at the beginning of a tryst, the yearning of the middle, or the madness of the end, she captures the emotions with a pleasurable ache.

In “That Dance You Do,” the protagonist, during the chaos of her son’s birthday party, observes her husband. “Annoyingly, he is drinking a scotch on the couch and reading The Wall Street Journal as though this party has nothing to do with him. As though you, and a mentally unstable magician, and a redheaded babysitter, and a dozen little boys about to embark on a sugar high, were just some raucous group in a restaurant that he will be careful not to go to again.”

The author is equally good at showing how we feel connected. In “Cranberry Relish,” the character Josie thinks about her lover and how “Online at least, Billy made her laugh, and feel good about herself, and examine her own life more closely.”

Ultimately, this collection is not so much about betrayal as it is about figuring out how we fit into the lives we’ve created. It questions how much of our true self we share and how much we keep saved in our own hearts.

On casual observance, you might think Heiny’s theme is how people perceive us. But if you look deeper, it’s really how we view ourselves. There’s an inner magic going on within these characters. They can’t decide if they’re loveable or not. The title story follows a woman who has to put her dog to sleep while contemplating a breakup with her reliable yet dopey boyfriend. As her dog gets closer to death, Maya thinks both her boyfriend and the dog deserve “someone so much better.” This story made me cry. I don’t think the title does it justice.

In fact, the marketing side of my brain wonders why they didn’t choose a more intriguing title for the collection; it’s the antithesis of exciting. The cover seems random, and the price point for a debut author’s collection a risk. Regardless, the quality of the work transcends these shortfalls.

Overall, Heiny’s wit carries the book. I found myself laughing at some very serious situations. In what is often considered a man’s world, this collection stands out as a win for women who want to be considered just as funny, serious, and intelligent as their male counterparts, even when they’re struggling with their own mistakes.

Kim Drew Wright’s stories and poetry have been published in international literary journals. The Strangeness of Men, her debut collection of short stories, will be released from Quick Wit Lit in summer 2015.