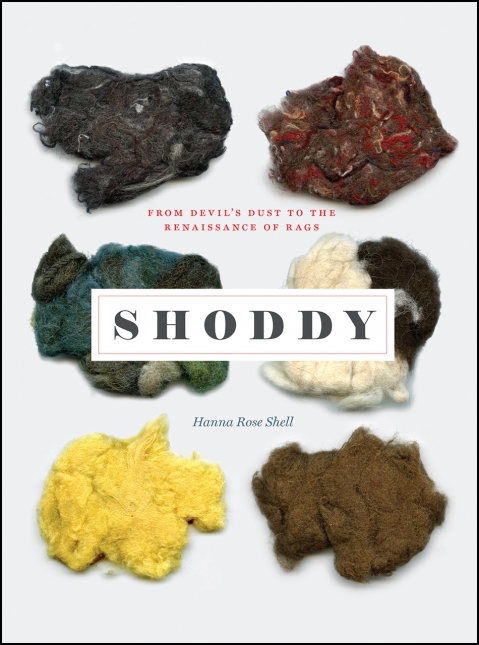 “Shoddy” is one of those things you both know and don’t know about. If that sentence sounds a bit off, it’s because we’re used to “shoddy” as an adjective, not a noun: shoddy workmanship, a shoddy imitation, anything ersatz, half-assed, cheap. But the word began life as a something, and as the basis of the biggest 19th-century industry you never heard of until now.

Hanna Rose Shell’s subtitle, “From Devil’s Dust to the Renaissance of Rags,” suggests both the book’s humble subject (reconstituted cloth) and the unlikely drama and fury that rose around it. Shoddy tells in 170 brisk, well-illustrated pages a tale, as the publisher puts it, of “industrial espionage, political infighting, scientific inquiry, ethnic prejudices, and war profiteering.”

If that seems a lot to pile on the cart with a heap of old rags — shoddy’s original incarnation — well, it is. But Shell pulls it off. She writes with an eye for both vivid visuals and historical links, perhaps because she serves as a university professor in three departments: history, art history, and cinema studies. What she calls her “shoddy odyssey” begins at fast-fashion chain H&M and, within three pages, is making stops in Massachusetts, Miami, Port-au-Prince, and West Yorkshire, dropping 1918 New York Times headlines and Old English etymologies along the way.

Shoddy, appropriately, is a mélange of things you wouldn’t normally put together because that’s what shoddy was: one of the earliest forms of recycling, a process by which old rags and fabric clippings were shredded and re-spun into suits, blankets, uniforms, and much else.

Or that’s what shoddy is, I should say, because, as the book points out, it’s “likely connected to something you are wearing right now.” It features not only in garments but “in your mattress pads, in the peculiar confetti-like stuffing in your mailing envelopes, even in the insulation in your walls.”

Shoddy has lived many lives, most of them not shoddy at all, and like most good books, this one serves as “a portal to another world” (as Shell once describes her topic) by telling us of a strange new land that’s also, it turns out, our own.

When Benjamin Law in 1813 took torn-up cloth, which for centuries had been used as fertilizer by the cheap or thrifty (and for millennia by the Chinese to make paper), and invented a machine that started those rags down the road to new clothes and new customers, he launched an industry that would make or break whole towns in England and, on our side of the Pond, come to involve the Civil War, the Supreme Court, Abraham Lincoln, and Oliver Wendell Holmes.

Shell largely avoids academese in telling this improbable tale of something as humble as shredded shirts coming to stand for “unknown and unknowable others…long-standing concerns surrounding sanitation and disease…a discomforting intermediary between human bodies and social classes…the moral depravity and deceit of the manufacturing and industrial classes.”

Again, a lot for old clothes to answer for, but think about it: We’ve never been shy about locating inferior qualities — and diseases, certainly— among Those People Over There from the wrong class or country or color, harboring dangerous genes or, in this case, jeans. And when unscrupulous manufacturers began cutting corners to make, of all things, Union Army uniforms that fell apart in battle and even on parade, “shoddy” made the transition from sturdy noun to crappy adjective once and for all.

A July 1861 Vanity Fair cover described in J. Matthew Gallman’s book Defining Duty in the Civil War shows “embarrassed volunteers in dissolving uniforms ‘closing ranks’ so that the passing ladies would not see more than they should.” A few years later, Scientific American remarked that “the word [shoddy] has passed into general use and has become a synonym for everything false.”

Bales of wool from some countries were considered “morsels of clothing of fair quality,” but from others, “unmitigated masses of frowzy filth.” (Give us your tired, your poor, your masses yearning to become carpet lining.) A long poem devoted to The Adventures of Miss Clementina Shoddy described the title character as a “slattern,” and her father as a shady businessman; you may never think of “rags to riches” or “virgin wool” the same again.

Near the book’s end, the author talks to U.K. textile workers, one of whom, Henry Hardcastle, makes audio speakers out of today’s shoddy, and he muses on the material’s — and language’s — chameleon-like nature:

“A lot of words derived from something else take on a whole new meaning. I mean if you went to a shoddy manufacturer and said his stuff was rubbish, shoddy, he’d probably hit you, because he thinks it’s absolutely marvelous what he’s making, you know, so it’s just the way language has gone. But yeah, marvelous material made from rubbish. Wonderful stuff and hateful stuff all becoming the same thing.”

Shoddy, as Shell says of the book’s subject, is nearly always “in transition between states, never one thing or another.” But if you don’t mind a few speedbumps, it’s a fun ride.