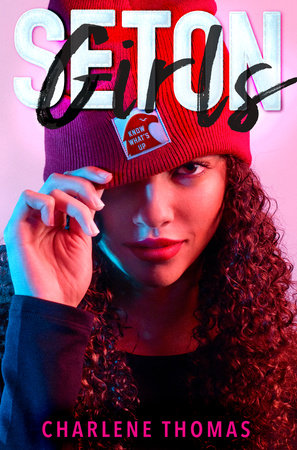 The Seton Academic High of Charlene Thomas’ debut, Seton Girls, is an elite prep school with an affluent, mostly white student body. While it boasts numerous teams, extracurriculars, and a newspaper with thousands of subscribers, Seton is best known for its Varsity (always capitalized) football team. And with good reason. The team has been on a winning streak for 12 years — undefeated in every game leading up to the state playoffs.

Sixteen-year-old Aly Jacobs has always felt special being a part of Seton, even though she and her boyfriend, J, stand out as some of its only Black students — ones bused in from a poorer neighborhood, no less. She’s keenly aware that she lacks the disposable cash to keep up with her classmates and knows she and J will never be true insiders because “it’s hard when you live an hour away, and you don’t have a car, and you don’t have twenty dollars in spare change for a pastry, and you can’t be at the coffee shop or the movies or the Galleria for pictures like these.”

But every long commute, every missed hangout will be worth it because a Seton education is the first step to future opportunity. As a junior editing the school paper, Aly deals with imposter syndrome, while J has his own pressures. Will he take Varsity to new levels as the first Black quarterback in school history? Will he be able to keep the team’s undefeated streak alive? Either way, Parker Adams — the younger brother of the now-legendary Cooper Adams, who started Seton’s winning streak all those years ago — plans to make his own mark first.

Parker’s dream of eclipsing his brother takes a dark turn when the fall starts with rumors that he hooked up with Britt MacDougal — his longtime girlfriend’s best friend — over the summer. As the school’s most popular clique fractures amid the fallout, everything students thought they knew about Seton begins to erode.

Aly learns more about the school’s history as she befriends the now socially outcast Britt. As their bond deepens, Aly questions the importance of Seton’s traditions, and whether her own legacy will inadvertently be to perpetuate the insidious parts of its past.

A prologue from the Seton Story — the school paper — immediately puts readers on alert about the “privilege” of attending Seton: “If you thought that that made us the lucky ones...You were wrong.” Short, fast-paced chapters and prose laden with foreshadowing add intensity to the narrative as both Aly and readers begin to decipher what exactly has made Seton’s Varsity team so unbeatable.

True to its title, the dual-timeline Seton Girls keeps the focus squarely on female students even as it unpacks the misogyny and sexism that have long been the source of many of Seton’s celebrated traditions. Aly’s narration is filled with naked longing to be part of Britt’s magical group of girlsfriends, “Britt’s term, so it never, ever gets confused with the less important role of being a girlfriend.”

She’s not alone in her fascination with Britt and her pals, “the four of them together like this weightless, perfect, intoxicating aura everywhere they go.” The girls attract both objectifying male gazes and envious female ones (the latter adding homoerotic subtext to many of Aly’s interactions with them: “Those girls are distracting in the most addictive way”).

Unfortunately, these sharp observations are undercut early on by Aly’s fawning over all things Seton, a place where “Kyle can be drunk ranting on my left and Gina-Melissa can be reciting perfection on my right, and it’s not weird, or ironic, or some wild juxtaposition. It just is. We all just belong here. And it just works.” It isn’t until much later that the author delivers on the more sobering tale hinted at on page one.

Details surrounding the football team’s past successes are often mired in specific gameplay jargon that might pull readers out of the otherwise suspenseful backstory. Still, the ultimate narrative payoff, delivered via a final-act shift, casts the entire story in a new light and makes Seton Girls a timely addition to the #MeToo conversation, one that asks important questions about privilege — especially white male privilege — and consent. As Britt tells Aly:

“If the door is open but you know you can’t get up and walk out of it that is force. That’s, like, the greatest kind of power that exists. That is corporation-level power. And it’s that kind of power — not the muscles or the dumb boy-tanks they wear — that guys like Parker will tell you isn’t real. And swear they’re not that type. But it’s the realest thing in the world.”

The Wrong End of the Telescope