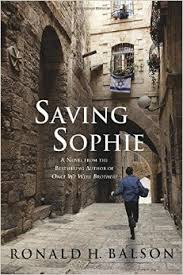 This exciting, information-packed novel is almost bursting at the seams of its ambition. In it, author Ronald H. Balson orchestrates several intersecting storylines that cover a broad geographical, generational, and geopolitical span.

The two main narratives follow an $88 million embezzlement case in Chicago and a sophisticated terrorist plot masterminded out of Hebron. When the payoff from a colossal business deal engineered in part by accountant (and single father) Jack Sommers goes awry, the money not deposited in the authorized account, Jack is among those under suspicion.

So he takes on a false identity and hides out in Hawaii.

The complicated legal case triggered by the embezzlement requires the skills of key characters from Once We Were Brothers, Balson’s first novel. They are attorney Catherine Lockhart, once fired from the firm that now needs her, and private eye Liam Taggart. These two have a long-simmering romance that percolates throughout.

They are also tied to the terrorist plot headed by Jack’s Muslim father-in-law, Dr. Arif al-Zahani, from his home in Palestinian Hebron. The doctor is a leader of the Sons of Canaan, a sinister group preparing a devastating action designed to kill thousands.

Liam is recruited to work with a beautiful counterterrorism agent, Kayla Cummings, who is at first identified as attached to the U.S. Department of State. The mission is to rescue Jack’s daughter, Sophie — who has been kidnapped by her grandfather, al-Zahani — and to foil the looming attack.

A degree of teasing romantic repartee develops between Kayla and Liam that suggests his lack of commitment to Catherine. However, in the end, Kayla actually helps Liam adjust his behavior in order to deserve and win Catherine. Here and elsewhere, Balson’s representations of interpersonal relationships are drawn with subtlety and sophistication.

But what of the money? Where is it, and what will it be used for? Perhaps it’s the price of Sophie’s release: a huge bankroll for future activities of the Sons of Canaan, whose motto is “From the Golan to the Gulf.”

In Hawaii, Jack runs into Marcy, the best friend of his deceased wife, Alina, al-Zahani’s rebellious daughter. Alina, it turns out, was an early victim of her father’s bacteriological weapon, punished for her disobedience to his rigid expectations, which included marrying Jack and leaving Hebron. Marcy is willing to help Jack and become a second mother to Sophie, assuming the captive child can be rescued.

Into the plot salad Balson tosses Russian mobsters who seem to trail the action, bumping off anyone with information about the journey of the embezzled money. Is Jack their next target, or is he in league with them? Or is he only a target of law enforcement, which must be kept at bay so that he can manage the rescue of Sophie?

(A subplot, perhaps overly distracting from the main business of the novel, involves a college-basketball point-shaving racket run by one of the principals in the business buyout.)

One of Balson’s goals is to create a rich context for the action that taps into 20th-century Middle-East history as well as the history of the region as enshrined in Biblical narratives beginning with Abraham’s land purchase.

His vehicle for this exposition — which is ultimately pro-Israel but strenuously attempts to balance Jewish and Arab-Muslim perspectives — is primarily dialogue. Rather than using the narrator’s voice, he feeds his facts through the exchanges of his characters. In this, Balson’s execution is borderline unwieldy.

Even though the expository conversations are motivated by the circumstance of one character having knowledge and another needing to be educated, too often they read like prepared speeches. After a while, more becomes less.

These excesses do little damage to the overall impact of the novel, though, which remains strong, colorful, and constantly suspenseful. Many of the best scenes in the later chapters focus on the doings of the determined and capable Kayla Cummings, who is revealed to be an Israeli agent.

Readers will also admire the scenes between the doctor and his granddaughter, with their complicated emotions and unresolvable conflict. The meetings of the Sons of Canaan are drawn deftly, the group’s members humanized and individualized. But best of all may be the exchanges that convey the growing relationship between Jack and Marcy, filled with desperation, romance, and moral reverberations concerning responsibility and guilt.

With its well-handled, vividly painted settings in and around Jerusalem and Hebron, Hawaii, and Chicago, Saving Sophie will keep readers engaged from first to last. And educated, too. (It’s generously stocked with supplementary materials for reading groups.)

Philip K. Jason is professor emeritus of English at the United States Naval Academy. A former editor of Poet Lore magazine, he is the author or editor of 20 books, including Acts and Shadows: The Vietnam War in American Literary Culture and Don’t Wave Goodbye: The Children’s Flight from Nazi Persecution to American Freedom. His reviews appear in a wide variety of regional and national publications. Click here to read his review of Once We Were Brothers.