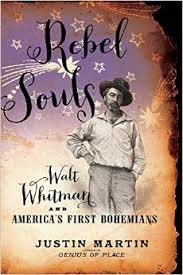 Before Brooklyn was cool and before the Lost Generation of the 1920s turned alcoholic ennui into literature, there was Pfaff’s. In the late 1850s, this Manhattan bar became the headquarters of America’s first artistic Bohemia.

Henry Clapp, a progressive journalist from Nantucket, discovered bohemianism during a three-year stay in France. Fascinated by the aesthetic and existential freedoms that bohemianism seemed to promise, he decided to import it to America. Clapp was a gifted publicist and, for an all-too-brief period just before the Civil War, he was able to recreate a version of what he had found in Paris in a small corner of New York.

The long table at Pfaff’s became the nightly home to writers, theater people, and anyone who wanted to cock an artistic snook at conventionality. Clapp was selective about who could join. You had to be edgy and quick-witted. Conversation was key, and if you had some demonstrable talent, so much the better. This provides wonderful material for Justin Martin’s well-researched, sometimes breezy history of Clapp’s circle: Most of the regulars at Pfaff’s were colorful characters, and a few of them went on to become famous.

Take Adah Isaacs Menken, a mixed-race Jewish actress and poet. She was celebrated from London to San Francisco for her performance as a nearly naked prisoner lashed to the back of a galloping horse. (The horse was real, but the nudity was not. She wore a body stocking.)

Unlike Edwin Booth, the greatest tragedian of his day, who was also one of Clapp’s protégés, Menken was not particularly good, but she was spectacularly charismatic. More importantly, she was an early version of that uniquely modern creature, the celebrity. With her flair for the newsworthy, Menken cultivated the darker side of bohemianism. Like many of her colleagues at Pfaff’s, she was fashionably tormented. And like a good number of them, she died young.

Artemus Ward, another of Clapp’s bohemians and Menken’s one-time lover, created a whole new kind of comic performance for which he was known across the English-speaking world. For all his fame — Abraham Lincoln read one of his pieces to his cabinet before launching into the serious business of the Emancipation Proclamation — Ward was a heavy drinker and even heavier depressive. Not surprisingly, he was dead at 34, but not before he had befriended, aided, and influenced Mark Twain.

The most famous Pfaffian, though, was the least likely member of the group. Walt Whitman was in his late 30s when he met Clapp. Whitman was a notoriously quiet man, not given to the kinds of verbal swordplay that marked the bohemians’ nightly drinking sessions. (In fact, he did not like to drink.)

But Clapp recognized genius when he saw it and served as Whitman’s first and canniest defender. Of course, Whitman was made to order for Clapp. His poetic innovations and sexually expansive work were perfect for a man who took it as his mission to fight an unholy war against the forces of convention.

As a crusader, Clapp had his work cut out for him. Bohemianism was harder to sell in the U.S. than in France, because there was less here to rebel against. Whereas France had an official culture of exhibitions, theatrical performances, and poetry, America did not. Where the French prided themselves on their classical traditions, the best the United States could boast was the Atlantic, a magazine representing establishment taste in America, such as it was. (For all the bravado with which Clapp attacked the periodical, he was not fighting an epic battle. This was small-scale skirmishing, at best.)

Clapp was successful, but his success was short-lived. It is true that his house organ, the Saturday Press, was well known, was controversial, and spawned imitators. Even so, its subscriber base, though loyal, was never particularly large. The paper was done in by a number of factors.

Clapp might have been an excellent polemicist, but he was a lousy businessman. More to the point, he was unlucky in his timing. His efforts to foment a cultural revolution were eclipsed by a very real civil war. In the face of the bloodiest conflict in the nation’s history, Clapp’s experiments could hardly win the day.

It is not a coincidence that the Saturday Press closed a month after Lincoln’s election in 1860. It reopened when the Civil War ended in 1865, only to run out of money the very next year. As it turned out, postwar America was in no mood for bohemians. It had had enough rebellion.

It might say something about Clapp or about the limited half-life of drunken conversation that the most interesting chapters of Martin’s book take place outside New York. The story picks up pace when the backdrops get more expansive — such as when Martin describes Whitman’s time tending the wounded in Washington, DC, or when he offers an account of the minor writer Fitz Hugh Ludlow’s dusty trip across the continent in the company of the major painter Albert Bierstadt. (The trip itself ended badly. Ludlow did not get the bestseller he was looking for, and his wife ran off with Bierstadt.)

Perhaps the best moment in Rebel Souls takes place in Virginia City, Nevada. Ward meets Twain and, after a long evening of drinking, climbs up the side of building, shouting, “I can’t walk on the earth. I feel like walking on the skies.” Twain follows him, and the two writers — one famous, one unknown — proceed to jump from roof to roof.

Clapp’s dream of an American Bohemia did not take flight. At least, not at first. It would have to wait awhile, until the United States developed its own institutions and settled culture. Then, and only then, would bohemians have an establishment solid enough to kick against and strong enough to sustain them.