Nice country you’ve got there. Be a shame if something happened to it. 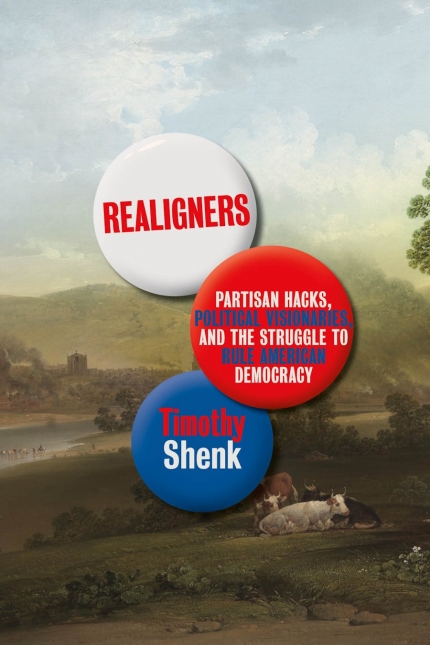 Political division has defined American politics since at least the Great Financial Crisis of 2007-2008, but maybe back to 2000, which featured the first of two presidential elections this century to install a president who’d won the Electoral College but not the popular vote. We’ve had slim congressional majorities and massive public protests ever since. And no leader or movement has emerged to transcend the differences of opinion that permeate the public mind.

Sometimes, it feels naive to hope one ever will again.

Historian Thomas Shenk argues in Realigners that we’ve had such leadership before, in more divided and precarious times, including during the Civil War and the Great Depression. Our present dysfunctions reveal a failure of leadership, yes, but not a failure of the idea of leadership. There has always been, as the author describes, a “Golden Line” between the elite and the governed in American politics. Our present elite has failed to build convincing electoral majorities. Nothing will change until they do.

Going back to the writing of the U.S. Constitution, elections are what Alexander Hamilton, James Madison, and their wealthy and influential collaborators imagined gave moral justification for the government to exert power over a population of individuals who saw themselves as free and self-governing. Hamilton and Madison may have been concerned with the tyranny of kings, but they were more worried that the newly independent country would fall into anarchy, particularly as local communities challenged the federal government’s right to collect taxes to pay down Revolutionary War debts.

The creation of the Constitution — written in secret — was the country’s first major realignment. Though the document would need eventual nationwide ratification, Hamilton and Madison did not want public input on every point. Rather, they sought acquiescence to the finished product. While the process was messy and compromises were made, Hamilton and Madison effectively controlled the conversation and were able to cement the Constitution into American society even though, Shenk estimates, it never would’ve been ratified had it been put to a yes/no vote from the people rather than their representatives.

Throughout Realigners, we see this theme repeat as influential Americans from all sides of politics orchestrate and guide public debate to create outcomes that are, if not inevitable, at least highly likely. Shenk’s realigners are often not the people who seek or hold public office. (Presidents play a surprisingly small part in his story, with the exception of Barack Obama.) Mostly, they include political commentators, strategists, and activists like W.E.B. Du Bois, Walter Lippmann, and Phyllis Schlafly.

Shenk’s take on history differs from most. Some historians, like Nikole Hannah-Jones in her 1619 Project for the New York Times, look for a narrative through-line such as slavery to tell the story of America’s founding to its present. Others might build a narrative out of capitalism, civil liberties, rebellion, or religion. Yet Shenk, a progressive who was recently co-editor of the political journal Dissent, believes the story is best told as a struggle among people to build the majorities necessary to win elections and to pass meaningful legislation into law. He writes:

“[R]ather than stressing continuity, a study of realignments has to underline the importance of change. Because there’s no one thread tying the history of American democracy together, no abiding center, no single answer. But there is a recurring question: How can you build an electoral majority?”

Over time, the federal government has become both more directly democratic (by expanding the voting population and allowing for the direct election of senators) and more powerful (particularly in the areas of regulation, law enforcement, the military, and intelligence). This renders it both responsive to and resistant to public will. What matters, then, is the ability of government leaders to manufacture consensus that allows for progress. A lot of people wanting something just isn’t enough.

Shenk cites major popular movements that have failed to significantly influence the government. Black Lives Matter, formed in 2013 and reinvigorated by the 2020 murder of George Floyd, put police reforms on the federal agenda, but Congress chose not to act on them. Years prior, Occupy Wall Street demanded economic reforms that were largely ignored. A decade later, about all the movement could claim credit for was the limited (but substantial) student-loan forgiveness endorsed this year by President Joe Biden.

Old techniques for controlling the debate don’t seem to work as well anymore. Though it’s not mentioned in the book, Obama, a rare president-as-realigner, tried to cut through the politics of long-term budgeting by appointing a bipartisan panel — led by Alan Simpson and Erskine Bowles — to make recommendations to Congress that inevitably included cuts to Social Security and Medicare. The committee’s suggestions went nowhere. We have to wonder if Hamilton and Madison would’ve been effective in this era of social media, cable news, and free-flowing information.

Shenk is an optimist, however. He looks to the Civil Rights Movement and its 1963 March on Washington as a model for progress. The right leaders with the right allies and the right communication strategies can still build coalitions in the United States. And while some of today’s loudest voices seem to enjoy — and even stoke — our divisions, the mass of well-meaning Americans can be led to build a better society. That’s the hope, anyway.

Michael Maiello is an author, journalist, and playwright. He worked for 10 years as a writer and editor at Forbes, and his work has appeared in McSweeney’s, the New Yorker, the New York Times, and other publications. Find his free Substack here.

Sweet as Sin: The Unwrapped Story of How Candy Became America’s Favorite Pleasure

Despite its sugary title, this tale hits too many sour notes

Hawaii’s history told through the eyes of a quirky commentator.