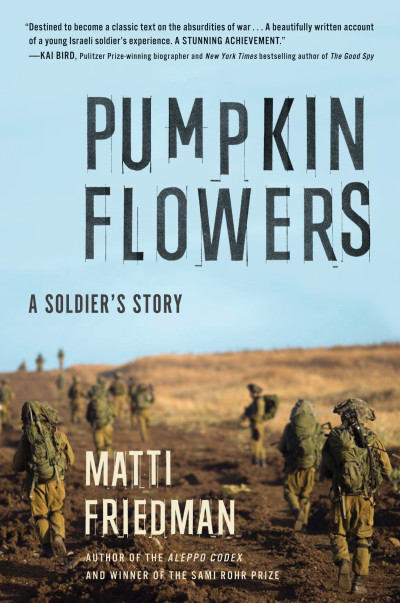 This book hurt. I think it will hurt anyone who has seen combat. It brings back memories we try to bury. It makes us realize that war is hideous wherever it occurs and that a combatant’s unspeakable experiences are universal. We never talk about them. Maybe if we did, we’d find out that others, in other wars, other cultures, other nations across the earth, have gone through the same gruesome ordeals. And for what?

Matti Friedman is a journalist by trade. His chapters are short, sometimes a single page. Each could be an article in a newspaper or magazine. Yet this is the work of a first-class craftsman. Friedman’s pithy style almost conceals the poetry in his sentences, vocabulary, and allusions. The fundament that makes this book hurt is the beauty of the writing.

Friedman tells of his time as a 20-year-old Israeli soldier assigned to a remote outpost on a hill called “the Pumpkin” in the “security zone,” a narrow strip of Lebanese land along the northern border between Israel and Lebanon, stretching from Mount Hermon in the east to the Mediterranean in the west.

The zone was “a perilous little world of hilltops peering at each other through binoculars and sending radio signals flitting back and forth over the canyons.” It had been established to preclude incursions by local Shiites calling themselves the Party of God, Hezbollah. There were about 200,000 residents in the security zone, most of them Shiites, “severed from the rest of their country and…suspended between us and Hezbollah.” Radio reports back to Israel referred to casualties as “flowers” and the dead as “oleanders.” So the book’s title, Pumpkinflowers, denotes those damaged at the Pumpkin. Friedman is among them, even though he bore no visible wound.

The mission of the Pumpkin was “Protecting the Northern Communities.” Those words were emblazoned on the wall of the mess hall.

Friedman begins his chronicle in 1994, with a soldier named Avi who preceded Friedman to the Pumpkin. “Avi was a difficult recruit,” Friedman tells us. “He was also a writer — not a great one yet, but on his way.” He served with several dozen other soldiers at the outpost, provisioned by convoys “rendered unpredictable by the threat of bombs” and ambushes.

Avi was enchanted by the French author Romain Gary, especially his novel The Kites. Like Gary, Avi struggled to maintain some fragment of his innocence despite the war. “I am keeping it in hiding, so no one finds it,” Avi wrote. “There is no room for innocence here. Innocence brings exploitation in this place.” In February 1997, he was killed in a helicopter accident before the end of his service at the Pumpkin.

That accident fueled something known as the Four Mothers Movement, led by women who had sons in the military. They called for the security zone to be closed and Israeli troops withdrawn. As casualty reports — flowers — later updated to reports of deaths — oleanders — flowed back to Israel, public opposition to the security zone increased.

Friedman arrived at the Pumpkin in 1998. In one foray into the countryside, launched to rout Hezbollah guerrillas, he was ambushed in a vehicle he describes as an armored porcupine. This time, with no one killed. After the incident, he learned some of the bitter humor of beleaguered soldiers: “What doesn’t kill you makes you stronger. What does makes your mother stronger.”

He recounts the plight of all soldiers in combat everywhere, long periods of boredom when nothing happens, punctuated by hours of terror, when carnage is king. He tells of mediocre television shows from Israel, books passed from one soldier to another, video cassettes, a guitar. But Friedman used his time keeping watch from the trenches, greasing guns, and filling ammunition crates. And as he makes clear without ever saying it, a soldier loves the man fighting next to him and will give his life to save his buddy.

The post commander, Makov, whom Friedman found “competent and morally sound,” had an instinctive understanding of the important things: “He wanted to engage the enemy and destroy them, and he loved his men and wanted to protect them” — the hallmarks of all superior officers. Makov reminded me of General Al Gray, commandant of the U.S. Marine Corps, whose men would do anything he asked, including sacrifice their lives.

In the spring of 2000, after Friedman had left, the Pumpkin was abandoned and destroyed when Israel decided that the security zone was more the problem than the solution. Israeli military forces were pulled back south of the border, and each of the hilltop outposts was demolished. As Friedman judges it, a footnote to Israel’s war to survive was erased and soon forgotten.

But Friedman didn’t forget. The soldiers he had served with joked about someday returning to Lebanon as tourists. Friedman was born in Canada and had migrated to Israel on a Canadian passport that was still valid. So “I flew to Toronto and spent a few weeks there, becoming accustomed to drooling my vowels instead of spitting them out. I cut the Hebrew labels out of my clothes.” In September 2002, at age 25, two years and five months after his last night on the Pumpkin, he landed in Beirut posing as a Canadian tourist.

Through an arduous journey in a variety of vehicles, he arrived at the Pumpkin. “There was a familiar smell of dust and baking cement I had forgotten.” Deserted, the hill felt dead. “For a time this hill was worth our lives, but even the enemy seemed to know that now it was worth nothing at all. That seems like a universal lesson for a soldier.”

And that appears to be the lesson of the book. “My twin sons are seven and my daughter three,” Friedman writes. “I know I could have missed this. I almost missed it. Others did.” And for what?

Friedman was born two years after I lived through the fall of Saigon and escaped under fire when the North Vietnamese were already in the streets of the city. He draws the same lesson I have: for what? Maybe war really is the same for all who have fought in it.

Tom Glenn served in the military, but his time in combat was as a civilian. A speaker of Vietnamese, Chinese, and French and under cover as a soldier or Marine, he provided signals intelligence support to units in combat on and off for 13 years in Vietnam and survived the fall of Saigon. A writer all his life, he has 16 short stories and three novels in print. A fourth novel, The Last of the Annamese, will be published next year by the Naval Institute Press.