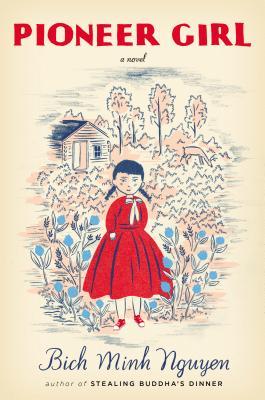 In the interest of full disclosure, this reviewer feels she must reveal a bit of personal history:  In the autumn of 1975, after the fall of Saigon, a U.S. Marine approached the Baltimore Catholic community to which I belonged.  He had brought with him his exquisitely beautiful Vietnamese wife. Would we, he asked, help him find a home for her mother, sister, brother-in-law and five little nieces and nephews, all of whom were housed in a resettlement camp in Arkansas.

For weeks, without any luck, the Marine and I searched Baltimore for a suitable place, until one evening in mid-November a woman called saying she had a rental property and would make it available if our community would guarantee the rent. We would, and on the Tuesday before Thanksgiving the Marine, his wife, and I picked up her family at the airport and brought them to their new home.  Soon thereafter, I got a job, and I never saw those eight refugees again.

So when I was asked to review Pioneer Girl, a book that compresses the battle between America and Vietnam into a conflict within the heart and mind of one individual, I knew my own challenge would be to maintain my objectivity while wanting to like Pioneer Girl no matter what.  And I almost do.

A literary mystery by Bich Minh Nguyen, Pioneer Girl couples a young woman’s struggle for self-identity with her search for the provenance of a mysterious pin, one that possibly belonged to Laura Ingalls Wilder, author of the Little House books. Lee Lien spends her childhood moving to six different towns in four different Midwestern states as her immigrant mother and grandfather work in one “Chinese” restaurant after another.  For the little girl, the experience creates a twofold sense of isolation: first from her Vietnamese heritage by virtue of her mother’s ferocious silence, and then from her American birthright of self-determination. Confused about who and what she is supposed to be, she seizes upon the Little House books. “They represented an idealized old-fashioned landscape of pioneering, making do, and scraping by, no matter how forced the veneer of family life and good cheer,” she writes. “My own concept of American history had been unknowingly shaped just by reading those books, and . . .  they had rooted in me a paradox of pride and resentment ─ a desire to be included in the American story and a knowledge of the limits of such inclusion.”

Years later, Lee comes head to head with those limits, when, armed with a Ph.D. in American literature but unable to find a job in academia, she is forced back to the drab little house in Franklin, Illinois, and to working beside her mother and grandfather at the Lotus Leaf Café.  “I had come all this way so as not to think about my family, the Lotus Leaf, the way they paired and weighted me with obligation,” she laments. Propelled by boredom and desperation, Lee fixates on a gold pin that an American reporter named Rose left in her grandfather’s Saigon café in 1965. The pin matches one owned by Laura Ingalls Wilder, whose daughter Rose grew up to become a reporter.

Lee’s adult search, in effect, recreates her own peripatetic childhood and also mirrors Laura Ingalls’ story of a century earlier when Pa Ingalls continually uprooted his family in his hunt for a successful homestead.  But now, instead of a landscape promising fruitfulness and hope, Lee sees dreary little towns repackaging the past and promoting it in local “shoppes” selling “olde-fashioned ice cream.”

Nguyen has a keen eye for detail and for the greater meaning those details portend ─ her description of strip-mall “Asian” buffets, both in their numbing sameness and the gluttony they engender, is flawless.  And she has a sharp sense of irony, as when she visits the Ingalls’ home outside of Mansfield, Missouri, and finds a group of teens in cargo pants and halter tops practicing soppy romantic ballads for Mansfield’s “Wilder Days.”  She also deftly captures the disaffection of the digitized present: its sly text messages, its monosyllabic conversations, its casual sex used to deflect true intimacy.

But she misses opportunities to create dynamic scenes, and as a result the reader sees characters going through actions with no sense of how Lee is internalizing them.  When, after being gone many months, her wayward brother comes home, for hours his mother refuses to acknowledge him in any way.  A more accomplished writer would have infused the situation’s tension with enough energy that it became electric, sparking and crackling with what is unspoken.

Other than Lee, the most significant character in Pioneer Girl is her mother, Tran.  Driven, fierce, and possessing a savage tongue, Tran spews out venom, while holding fast to a treasure trove of secrets. In her unfiltered and unremitting criticism of her daughter, she calls to mind the women of The Joy Luck Club. But eventually readers learn those women’s horrific histories and see how those histories shaped their fear for and love of their daughters.

Unfortunately, Nguyen never lets us learn the circumstances of Tran’s escape from Vietnam, nor the precise details of her husband’s death in a fishing accident, nor her true relationship with the mysterious Hieu, a friend of her husband, who may or may not be her lover as well as her benefactor. In the end, Lee doesn’t come to appreciate her mother so much as simply walk away from her.

In much the same way, Pioneer Girl’s conceit of layering a literary mystery atop the main character’s struggle simply peters out without a satisfying resolution.  Perhaps that’s appropriate: true resolution demands redressing the past. But America is the land of the future, and uses its past as another commodity to be repackaged and sold to a public gluttonous for nostalgia.

For her essay on ice skating, Patricia Schultheis most recently won first prize for nonfiction sports writing from Winning Writers. She has been a finalist for the Flannery O’Connor and Snake Nation Press award, and is the author of two dozen published short stories and several essays as well as a book on Baltimore’s Lexington Market.