An intrepid — and flawed — biologist sounds the alarm about looming environmental catastrophe in the Gulf of Alaska. 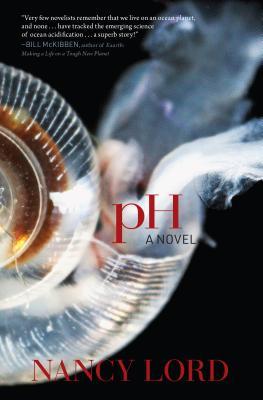 A sea creature so small it cannot be seen with the naked eye could be the harbinger of a catastrophe of global proportions. The creature is a sea snail, called a pteropod, and it is a central figure in Nancy Lord’s new novel, pH. The story addresses the politically charged topic of climate-change denial and its consequences for Alaska.

If you’re an Alaska enthusiast, you’ll want to read this book. If you purposely avoid novels that speak to political issues, I understand, but I urge you to make an exception for this one. The critical role that the pteropod plays in the ecosystem of the Pacific Northwest makes it an important subject. The ethereal beauty of this undersea “butterfly” or “angel,” with its translucent shell and gauzy “wings,” makes it compelling.

The unassuming protagonist of pH is Ray Berringer, a biologist studying the pteropod. He is a professor at the University of the North in Alaska. Twice yearly, he helms a cruise in the Gulf of Alaska with his students to gather data on the status of the pteropods for comparative analysis. The trends are disturbing. The pteropods’ shells are dissolving, and Berringer suspects ocean acidification.

The novel picks up in fictional form where Lord left off in her most-recent nonfiction work, Early Warming, with the topic of ocean acidification. The novel’s title refers to the pH scale, which measures acidity. As the ocean absorbs more carbon dioxide, it becomes more acidic, compromising the pteropod and, in turn, threatening the food chain.

Lord’s insights into environmental issues and the integral part the environment plays in the lives of the Alaska native population come from her own experiences. She has worked in commercial fishing, as a naturalist, and as a trustee of the Alaska Conservation Foundation. These experiences, married with her writing skills (she has an MFA and teaches writing), have given Lord fodder for several other nonfiction books and short stories about Alaska.

She sets pH in the present, in a locale she knows well, rife with complications like corporate corruption and contentious politics. This is a departure from other examples of “cli-fi” or “eco-fiction,” like Margaret Atwood’s MaddAddam trilogy and Cormac McCarthy’s The Road, both of which are set in post-cataclysmic, dystopian landscapes where survival is the main concern.

The trial herein is not a struggle for survival but rather Berringer’s devotion to intellectual integrity. He is a flawed hero trying to manage as best he can in a world that repeatedly misunderstands his good intentions. He’s a borderline recluse and drinks too much. He is married to a woman he considers his better and who pointedly reminds him of it. His jokes fall flat. He knows he’s a good teacher, but he feels awkward around his students.

Berringer initially welcomes news that the university is establishing an Office of Ocean Acidification to study the chemistry of the sea, which would dovetail nicely with his study of pteropods. But the good news is dampened by the man put in charge of the OA office, Jackson Oakley.

First, Oakley backs out of the research cruise on a flimsy pretense. After, he remains aloof, unwilling to exchange information with Berringer or contribute to the publication of the research results. Oakley is reluctant to call out acidification as a causal factor in the changing chemistry of the ocean. Berringer is suspicious that Oakley is receiving corporate payoffs to blunt the evidence supporting climate change. Berringer’s simmering anger makes his ineptitude at university politics worse, setting up a clash with the administration.

Berringer’s students enthusiastically support him, but Helen, a Native Alaskan student who worked on the research cruise, is more reticent in her support. Her situation is complicated not only because Oakley is her thesis adviser, but also because she’s sleeping with him. She’s troubled by his lack of collegiality and his focus on publicity rather than research. She prefers Berringer’s challenging review of her work to Oakley’s cursory oversight.

It is through Helen that we get a glimpse of the challenges facing Alaska’s indigenous people and see how the changing environment is eroding their way of life. A promising scientist, she is caught between her love of learning and her dedication to her family and their traditional ways. The science she pursues is taking her farther away from them.

Add to the mix a wonderfully flaky artist, Annabel. She joins the research cruise to help interpret the arcane scientific work for the public. She brings humor, in her New-Agey dress and mystical salutations, but her flamboyance — she shows up in Berringer’s office dressed as a pteropod superhero to show solidarity with his fight against the administration — irritates his increasingly fraying nerves.

Lord’s book pays homage to the dogged dedication of scientists like Berringer. She seamlessly weaves into the story detailed, but not distracting, explanations of the ocean’s chemistry, the biology of marine life, and scientific methodology, along with descriptions of Alaska Native life and customs. The novel, an anthem to saving the environment, is as educational as it is enjoyable.

It raises an interesting idea, too. Lord argues that neither art nor science alone can save the planet. She makes a full-throated plea to understand and appreciate the interconnectedness of science and art. Both, she says through Annabel, require creativity, and one can inspire the other.

Annabel perceives the pteropods as a representation of the vitality and fragility of life. (I don’t think it’s coincidental that a butterfly, another beautifully fragile creature, foreshadows approaching environmental disaster in Barbara Kingsolver’s Flight Behavior.)

In pH, Annabel uses art to convey this perception on a visceral level that obviates the need for a scientific explanation. She makes sculptures of organic paper that are set alight and launched on ice pedestals off the ship’s stern one night. The paper and ice dissolve, and the flame is extinguished — a subtle reminder that what exists now may not always.