Our Symphony with Animals: On Health, Empathy, and Our Shared Destinies 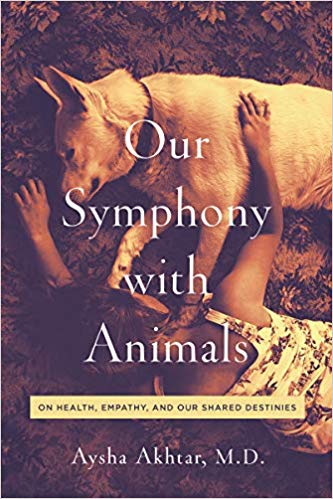 Ever since I was a child, surrounded by hunters and trappers in the high hills of Western Pennsylvania, it has been a mystery to me how some people can say — and apparently believe — that animals are incapable of such emotions as fear, loyalty, and, yes, love.

One guess is they have never been with an animal for very long. Or maybe they are followers of the 17th-century thinker Nicolas Malebranche, who wrote in his The Search After Truth that animals “eat without pleasure, cry without pain, grow without knowing it: they desire nothing, fear nothing, know nothing.”

His more famous fellow rationalist René Descartes seemed to think of animals as being like those cute Japanese robot dogs that move and bark but, unlike him, cannot figure out Cartesian coordinates and do not think or feel in any meaningful senses of the words.

Anyone who has had a dog or a cat as a true companion is likely to respond, "Dudes, are you paying any attention?!"

Granted, a lot of this has to do with philosophical debates about theology, the existence of other minds, and our inability to read another’s thoughts. But it is indicative of a mindset that believes non-human animals are inferior to humans and so we are justified in doing with them whatever we want. They are another resource to be exploited.

Aysha Akhtar, in her new book, Our Symphony with Animals, shows she does not believe this and that she has the scientific chops to make a strong case for animals as our co-equals, worthy of compassion and respect. That recognition, she implies, will make us better people.

She writes: “This book is a journey to understand the very nature of health and how it is influenced by the lives of animals. Specifically, how does our empathy for animals — and lack of it — affect our health in the deepest sense of the word?”

That journey takes her down some strange paths. She meets, among others, an industrial animal farmer, a Marine dealing with PTSD, and, most disturbingly, a serial murderer known as “the Happy Face Killer.” Akhtar gets closer to him than prudence would suggest. All have experiences with animals that shaped them as people.

The book is also part memoir. As a child, Akhtar was regularly molested by a relative. A dog named Sylvester helped her survive. He, in turn, was abused by another relative — until Akhtar herself found the courage to put a stop to it. The author is living proof that the bond between humans and animals can be of mutual benefit. Her personal story gives Our Symphony with Animals easy access to the more challenging scientific material presented.

Some of the chapters are unsettling. I had to put the book down a few times while reading a section on New York City investigators who deal with animal abuse cases. And the section on factory farming is yet another indictment of a horrific industry.

Akhtar writes of meeting one of hundreds of pigs jammed together, destined for slaughter:

“I remove my right glove, crouch down in front of the pig nearest me, gaze into her eyes, caress her snout and say, ‘You poor baby. What a sweet little girl.’ But human comfort is not something she recognizes. Her eyes look to someplace beyond me. She jams her head against the bars, up and down, foam frothing around her like the other pigs…No one in their right mind could look at these pigs and not immediately see that they have gone mad.”

Take these chapters as evidence that while empathy may be a worthy emotion, not everyone has it.

Fortunately, some of us do. Akhtar tells the story of a Japanese man she says decided to “willingly sentence himself to death” by staying in the area contaminated by radiation after the deadly 2011 earthquake and nuclear reactor disaster in Fukushima.

Naoto Matsumura chose to care for the relatively few animals still alive after they were abandoned by panicked humans. “’I couldn’t leave the animals behind,’ Matsumura told reporters. ‘To me, animals and people are equal.’”

Akhtar the physician writes, “Although the effects of radiation exposure aren’t evident, changes are happening deep in his cells as they slowly divide into cancerous mutants that will one day hijack his body — that is, if he lives long enough.”

Occasionally, the reader may have trouble following the book’s narrative. Sylvester the dog pops up from time to time in somewhat unexpected places, but he is usually welcome, even if we are not sure exactly how he got in. Think of him as empathy incarnate and it makes sense.

Akhtar writes, “When we encounter another animal, no matter how fleeting the moment may be, we know that we are not alone. And that is comforting.”

In the end, if we and other animals do create a symphony, it is as much one by the industrial rock band Throbbing Gristle as it is by Akhtar’s beloved Mozart. The dissonant chords are heard as often as the beautiful harmonies.

But perhaps we are making progress. Akhtar also writes: “We are slowly acknowledging animals as their own, unique selves. We are starting to recognize animals not as what, but as who.”

After reading Our Symphony with Animals, I suggest you spend some time having a friendly talk with a sweet dog like Akhtar’s childhood friend Sylvester. It will do both of you good.

Sam Litzinger is a correspondent for CBS News. He volunteers at the Last Chance Animal Rescue in Waldorf, MD, where he is an unofficial puppy and kitten cuddler.