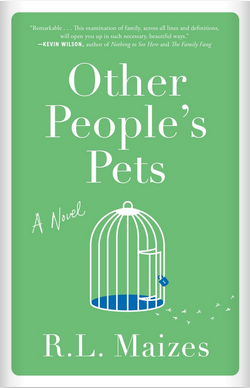 Last year, R.L. Maizes published a fine collection of short stories titled We Love Anderson Cooper, several of which prominently feature the intense relationships between guardians and their pets. Maizes’ first novel, Other People’s Pets, focuses on Louise (aka La La) Fine, an animal empath whose connection to all creatures great and small includes the ability to feel their physical and emotional pain.

But this engaging and poignant novel should not be pegged for animal lovers only. With its powerful exploration of a dysfunctional birth family and the life that can be made from and despite the traumas of inheritance, Other People’s Pets is, quite simply, a great read.

Saved from drowning on an icy lake by a guardian canine, abandoned by her mother at the age of 8, and raised by a father who is both a locksmith and a burglar, La La finds unconditional love more readily from the furred and feathered set than her human family. Her gift with animals means that homes with dogs become fair game for break-ins. As Zev, La La’s father, puts it, “You’re a goddamn secret weapon.”

Zev homeschools his daughter so that she can’t spill the beans about their extracurricular illegal activities. Yet, even as his choices ensure that his daughter shares his existential loneliness — he, too, has been abandoned by La La’s mother and is obsessed with her — he strives to be a good father.

Against all odds, he sometimes succeeds, such as when he finds La La’s first period-stained panties, tells her, “You’re a woman now. No need to be ashamed,” uses an assemblage of fruit to teach her about female reproduction, and offers a hot-water bottle to ease the pain of menstrual cramps. And when she reveals incriminating information about a burglary to the wrong crowd, Zev pleads guilty to protect her from a rap sheet of her own.

Thanks to a veterinarian mentor, La La comes to understand and put her animal empath capabilities to good use as a vet tech and veterinarian-in-training. However, her professional dreams, as well as her engagement to a chiropractor, is imperiled when her father bungles a burglary and ends up in jail. In order to pay his legal bills, La La returns to her father’s trade and seems on the brink of losing everything.

Resisting both despair and sentimentality, Other People’s Pets deals with the toughest stuff: maternal love that is anything but unconditional, literal and psychic imprisonment, the death of love and beloved pets, second chances thwarted by fate or bad luck. Lousy hands dealt by life, and parental units who are hard to honor, are mourned.

Says Zev from his prison cell after he has been captured by a bounty hunter, “It seems unfair, doesn’t it? Some people born into love and others...” Yet, in Other People’s Pets, the human and animal connections that save us are also, sometimes belatedly, recognized and cherished.

The structural shifts from past to present reinforce the role that inheritance plays in the lives we create for ourselves. And the parallels set up between major plot points as well as between animals and humans provide much readerly satisfaction. However, fleeting encounters provide pleasure as well. Some of the most memorable moments occur during La La’s and Zev’s criminal activities.

During a burglary at one posh home, for instance, La La happens upon “a short mink jacket.” Knowing that the “fence will give her a good price for it,” she starts to put it on, “intending to wear it beneath her own coat…But as soon as she slips her arm through the sleeve, her lungs slam shut and dozens of needles prick her chest. Gasping, she tears it off and drops to her knees, feeling the anguish of the dozens of animals gassed to make it.” Here, her empath skills extend from the living to the dead.

On another job, La La is startled to discover a young boy hiding in a closet who turns out to be a fellow animal empath. Having “never met anyone like herself before,” she not only receives affirmation of her own identity but also ends up serving as his momentary mentor.

While on the lam, Zev hitches a ride with a young man who sports a “red hat” and affirms to a police officer during a traffic stop that he is “a fan of the candidate.” This scene, which evolves into a wonderfully ironic view of law-and-order rhetoric in these United States, is just one of the many gems at the margins of the main narrative.

At one point, La La “wonders if all creatures are like that, taking care of themselves at the expense of others.” Yet those who are kin to La La by birth and by choice repeatedly demonstrate that they are capable of profound generosity as well as soul-crushing selfishness and carelessness. And as La La acknowledges, her own life “wasn’t without moral ambiguity.”

In her creation of this complex cast of compelling characters, R.L. Maizes reveals her writerly sensibility to be that of an omni-empath. In these times marked by an empathy deficit, such a quality is not only welcome but also sorely needed. Other People’s Pets is a fun read that also provides non-saccharine nourishment for one’s soul.