Only Love Can Break Your Heart: A Novel

A heart of gold lurks within this ambitious tale of Southern adolescence. 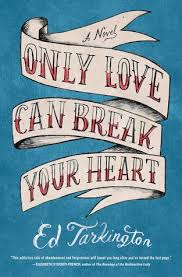 Set in rural Virginia in the 1970s and ‘80s, Ed Tarkington’s debut novel, Only Love Can Break Your Heart, tells a coming-of-age story that encompasses all the bumps and scrapes of a privileged Southern adolescence. The setting is lush, complete with rambling houses, wealthy and unknowable neighbors, and all the Neil Young music one could long for.

Rocky Askew’s childhood is colored by two powerful incidents: the night his brother, Paul, is shot by a neighbor, and the night Paul nearly kills Rocky before abandoning him and vanishing with his girlfriend. These events set up a narrative of unraveling families, lost youth, class struggles, and an America suffering unexpected confusion after the Vietnam War.

It’s an ambitious undertaking, which Tarkington tackles ably. An older Rocky reflects upon his youth within the framework of the Southern Gothic genre, complete with grotesque characters, holy rollers, a grisly crime, fallen women, and a folksy flair that brings to mind both Harper Lee and Stephen King’s “The Body.”

Tarkington ties his disparate subjects with the common thread of worship. Whether they’re worshiping God, siblings, the dead, or wealth, each subject has its own plot set into motion long before Rocky’s birth and is called into question with an unflinching eye.

What could easily have been a self-righteous, judgmental account of adolescence is softened by Rocky’s naivety and expansive forgiveness. While the narration remains close to young Rocky, it’s never without the sense that his older self is reflecting, finding fault, and pardoning. Only Love Can Break Your Heart asks that we view youth with sympathy and compassion.

Tarkington’s style hums in character-focused passages. Rocky says of his father, “You could see through those eyes as if down a narrow tunnel to the past where stood a poor kid from the sticks, listening to Huey Long’s ‘Every Man a King’ speeches on the radio, gazing out beyond the peanut fields, dreaming. They were the eyes of the eternal optimist.”

Though Rocky’s family dynamics are deliciously complex, it’s Paul’s disappearance that shapes him. Rocky is an infinitely sympathetic character, a drifter in his own life who becomes a cipher for the memory of his missing brother. Then Paul’s ex-girlfriend, Leigh Bowman, returns a broken woman with a story so wild it shatters Rocky’s every idea about the older brother he idolized.

The destruction of the myth of Paul foreshadows a darker chaos, which surfaces not long after Paul’s unceremonious return. The older Rocky views this all through a romantic, if regretful, Vaseline lens. Tarkington has a knack for capturing the sweet pain of tragedy and the peculiar romance of loss. Tarkington’s writing is deeply romantic, drawing characters in broad strokes that have the feel of a story being told on a porch, whiskey in hand. It’s a slow unfolding, ideal for readers who appreciate measured pacing and large scope.

Where Tarkington’s approach is unique is in his keen focus on absence, and how the missing and the dead take on a life of their own. Rocky is born into a family still grieving the death of his half-sister, Anne-bet. While younger Rocky grows up thinking he lives in Paul’s shadow, older Rocky is aware that they all lived in the shadow the half-sister he never knew.

Paul is most alive, most vibrant, in Rocky’s imagination. When he is in scene, on the page, we feel Rocky trying to reconcile his love and imagination with the person before him. The two never quite line up. The most clearly we view Paul is not through his presence, but through Leigh Bowman’s brutal account of what occurred after their disappearance.

Many of the crucial plot elements take place offstage and are described to Rocky, making for a series of brilliant stories of cults, murder, and ruin pocketed within the larger narrative. Most of these tales belong to the book’s female characters. Leigh and Patricia Culver, the enigmatic neighbor’s daughter, tell the tales on which the book hinges. It’s a skillful switch — a book ostensibly about a young boy’s relationship with his brother and father becomes a book governed by the women who shape their lives.

Where the narrative suffers is lingering in nostalgia a bit too long, a somewhat protracted ending, and occasional overindulgence in its reliance on music as an indicator of both time and sentiment.

In a book whose characters wallow in alcohol, prescriptions, sex, and religion — to disastrous results — Rocky’s nostalgia is the most powerful distorter, sometimes painting sympathy where it hasn’t been earned. While music is a critical tie between Rocky and Paul, Tarkington hits the references fast and hard early on. These mentions lessen during the middle of the book, and the world is broader and brighter for it.

Tarkington’s prose is effortlessly smooth, almost disappearing into itself, making an engrossing and surprisingly comfortable read. Rocky’s voice becomes our own, his confusion ours, and his yearning to love and be loved an echo of what it means to be young. Tarkington succeeds in a difficult dance, creating a story that is at once bizarre and utterly familiar. He asks us to remember that we are all trying desperately to be loved, often failing, but trying.

Erika Swyler lives and writes in Long Island, NY. Her debut novel, The Book of Speculation, is a Barnes & Noble Discover Great New Writers selection, Indie Next List selection, and a Library Reads List selection. Follow her on twitter at @erikaswyler.

A criminal profiler seeks a mass murderer while confronting her own mother’s psychopathic history.