On Such a Full Sea: A Novel

A dystopian view of America 200 years down the road poses questions of what’s meant by freedom and security. 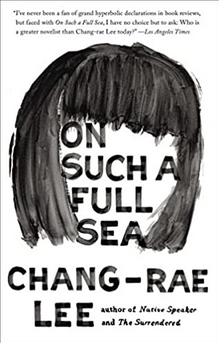 Dystopian society has long been a staple of fiction — and for good reason. Writers find it hard to resist the dramatic and symbolic possibilities inherent in a faceless totalitarian government or a complete breakdown of civil society (or some combination of the two). Although the dystopia is fictional, it always reflects aspects of our all-too-familiar past and present.

Chang-Rae Lee sets On Such a Full Sea at least two centuries into the future, in what was once the United States. As is often the case in dystopian novels, the exact cause for the dissolution of society is not clear, although disease and environmental catastrophe are part of the picture. In Lee’s future America, the wealthy live in gated communities called Charter villages. Outside those walls, most of the rest of the population struggles to survive in the ungoverned and lawless open counties.

A third type of community exists between these two extremes. Known as facilities, these abandoned urban centers now house entire relocated populations of Chinese cities. The facilities provide for the Charters; in exchange they receive basic services and protection from the anarchic open counties. One such facility, known as B-Mor, specializes in producing fish and vegetables for the Charters. The citizens of B-Mor were moved from China because their city “was made uninhabitable by the surrounding farms and factories and power plants and mining operations, the water fouled beyond all known methods of treatment.”

As the narrator relates:

“When our ancestors were first brought here ... rolling in on fleets of shiny silver company buses — the air was to them fresh and clear … and when they stepped out, they must have been entranced by the scant briny notes of the harbor waters, breathing them in deep. And think of how startled they might have been by the strange brand of tidiness in this place (once known as Baltimore) and other abandoned cities that settlers were sent to in other eastern and Midwestern states.”

When the forebears were shuttled to the houses assigned to them, “their gasps were not of trepidation or disappointment but of gratitude and relief.”

They are not prisoners; they can leave if they want. But the alternative is a more difficult, less secure life in the open counties. The people of B-Mor view themselves as immigrants, not slaves, though Lee is clearly exploring the meaning of freedom.

The unnamed narrator of On Such a Full Sea speaks in the plural “we,” so it’s hard to know if this is a single person speaking on behalf of the community or the community itself telling the tale. Either way, the technique serves Lee’s purpose perfectly.

The story follows a young woman named Fan who leaves B-Mor to search for her lover, Reg, after he mysteriously disappears. When Fan walks out the gates of B-Mor into the unknown, she instantly becomes a folk hero to those she left behind. The narrator is a traditional storyteller, using an oral tradition that is prone to embellishment and acknowledged as unreliable. At times the technique makes the book a bit episodic as Fan travels in search of Reg — picking up and shedding companions along the way, visiting both the open counties and the Charters. But Lee’s rich language and themes more than compensate for the meandering plot.

The horrors of the road in the open counties are largely in line with what is to be expected in such territory, though Lee doesn’t include the usually typical sensationalistic sex and violence. The author is more interested in the societal inequities of race and class that are played out in the worlds of B-Mor and the Charters.

At its most effective, On Such a Full Sea explores what it means to lose one’s rights, from the perspective of those who may not realize just what it is they have lost:

“But more and more we can see that the question is not whether we are ‘individuals.’ We can’t help but be, this has been proved, case by case. We are not drones or robots and never will be. The question, then, is whether being an ‘individual’ makes a difference anymore. That it can matter at all. And if not, whether we in fact care.”

The speaker here is the narrator, who has only a collective identity and is not actually an individual at all.

The novel sends a powerful message to readers about security and freedom, two cherished ideals that are often in conflict in contemporary America. In Lee’s dystopian worlds, however, no one is either secure or free.

The wealthy Charter citizens have convinced themselves that they have it all. But in fact, they live perilously at the top of a shaky pyramid, just one mistake away from losing everything. The B-Mors have accepted their lack of freedom in exchange for a security that is all too fragile.  And those in the open counties barely survive in a constant state of anarchy. Only Fan, by leaving B-Mor, asserts the right to be an individual, thereby creating her own definitions of what it means to be free and secure.

On Such a Full Sea shows readers three dystopias; in each, accepting the norm poses the greatest threat to survival. Lee takes us on Fan’s journey with such power and grace that we are forced to consider how his fictional societies inform our own views of the world, both as it is and as it might be.

Michael Landweber is the author of the novel We. His short stories have appeared in publications such as Gargoyle, Fourteen Hills, Fugue, American Literary Review, Barrelhouse and Ardor. He is an associate editor at the Potomac Review.

What We Lose: A Novel

An emotionally charged tale of grief, rage, and the resilience of the human spirit