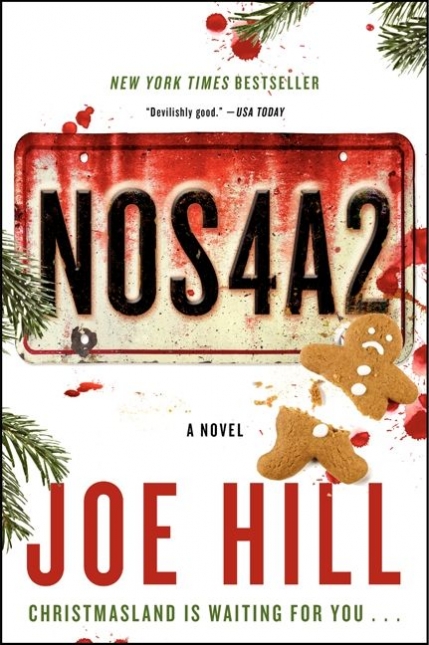 NOS4A2 is not a “vampire novel.” Joe Hill delivers a piece of horror that treats our expectations as a game, playing on our shared culture to create something more insidiously terrifying and painfully raw than any reader with thoughts of Stoker or Rice will expect.

“Do you believe in a place called Christmasland??
What would YOU do for a lifetime pass to a place where every morning is Christmas Morning and unhappiness is against the law?
Don’t give up on wonder!
Don’t give up on your dreams!
We’re looking for Go-Getters who LOVE children and aren’t afraid of adventure! Inquire about Special opportunities for our Security department.
This isn’t just a job ...
It’s a LIFE!
Christmasland is waiting for YOU!”

When 42-year-old ex-convict Bing Partridge finds this yellowing advertisement in his father’s 41-year-old copy of “Spicy Menace,” he’s not bright enough to see it as expired or archaic. No, it’s his ticket out of his life in janitorial work, to something beautiful. And despite the age of the ad, only two days after he mails off his clumsy letter he begins to hear the sounds of Christmas outside his window as a 1938 Rolls Royce Wraith drives past.

That Wraith, license plate NOS4A2, is piloted by Charlie Manx, the proprietor of Christmasland. He offers Bing a tempting position. Bing can leave behind his mops and brooms. He can stop being treated like he shot his dad with a nail gun before raping and murdering his mother — even if that’s precisely what he did. Instead, he can come and live at Christmasland, where everything is fresh and magical … but only if he helps Mr. Manx first.

Charles Talent Manx the Third is on a noble mission. He wants to protect as many children as he can: to take them to a place where they’ll be safe from corrupting and thoughtless parents, to keep them from abuse and from aging, and to make it Christmas for them — the happiest day in a child’s year — forever.

He has the Wraith, which knows the way to Christmasland. He has the Graveyard of What Might Be to tell him which children are the most in need of rescuing. All he needs is an assistant to help him take out extraneous elements, like parents.

If Bing will help Mr. Manx save 10 children and bring them to Christmasland, then Mr. Manx will let him come there too, and let him stay forever. An easy job? Perhaps, but not a fast one to complete. Mr. Manx may only bring one child, occasionally two, to Christmasland each year. He has been doing so since the 1930s, when he began with his own little girls, precious things who could not have been left in the care of their harridan of a mother. Is 10 years really that long to wait for the bliss of Christmasland?

Eight-year-old Vic McQueen, Victoria to her mother and Brat to her father, has a bicycle and a secret. If she rides her Raleigh Tuff Burner hard enough across the condemned Shorter Way Bridge, she’ll end up wherever she needs to be, whether it’s a town over or a library in Iowa. She doesn’t use the bridge to travel to places like London or Disneyland. She finds things instead: a missing earring, a lost toy, a dead dog, a stuttering librarian whose Scrabble tiles spell out warnings. These trips come with a cost, though, a physical and psychological toll that may leave her in bed for days.

After an extraordinarily painful trip — during which the stuttering librarian tells her “THE BRAT COULD FIND THE WRAITH” — Vic collapses and wakes up without her bike, which her parents tell her is gone forever.

It’s nine years later when Vic, full of adolescent angst and anger, hides in the basement of her childhood home and discovers her Raleigh, hidden behind some old boxes. She decides to ride again to the Shorter Way Bridge. This time it’s not a lost object she’s looking for, it’s trouble. Her bike knows what to do.

It deposits her on the lawn of the Sleigh House, nearly 2,000 miles from Vic’s home, just as Manx finishes bringing his next child, Bing’s ninth, to Christmasland. When the three characters collide, they all lose something: Bing his chance to go to Christmasland, Manx his freedom and Vic her spirit.

Sixteen years later, Charlie Manx is dying in prison. Bing is hoping for a miracle to bring Mr. Manx back, so that they can escort a 10th child to Christmasland. Vic is struggling to be a part of her son’s life as she tries to cope with her demons — the children who call her from Christmasland to blame her for taking away their father, sudden bursts of Christmas music on her radio in March or August. And in Kentucky, an engineer has finished rebuilding the 1938 Rolls Royce Wraith he bought at a federal auction.

Manx’s death should offer Vic a release. But his body vanishes from the morgue and somehow, beyond all reason, he and his partner are back on the job. Their first mission? Save Vic’s son; take him to Christmasland.

By the time Vic finds out, is it too late to stop them?

Hill delivers a story even more intense and complex than his first two novels, Heart-Shaped Box and Horns. Some elements of the horror are low-key and pervasive threads woven into the novel, such as the twisted ways in which Christmas haunts the characters. At other times, it is gut-twisting and in your face, with gore and sexual violence.

His pacing is reminiscent of another horror master, Clive Barker; building steadily, punctuated with more graphic moments of violence until the last third, which is a torrent of intense desperation that makes the book almost impossible to put down. NOS4A2 is an excellent work of horror that stays with the reader long after the pages have been closed…especially when Christmastime rolls ‘round again.

Ruth Tillman is studying library science and archives at the University of Maryland. She’s an eldritch enthusiast and always looking for the next Weird story or game.