No Time Like the Future: An Optimist Considers Mortality

In his latest memoir, the actor offers keen insights on living well in the face of Parkinson’s disease. 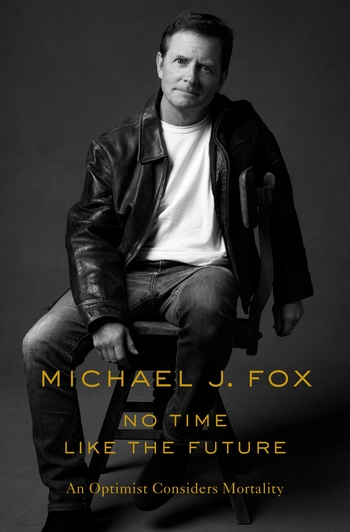 Not so long ago, Michael J. Fox was a panther in motion, “low to the ground…Nimble…a blur,” running, jumping, biking. But those gifts sputtered after an early diagnosis of Parkinson’s disease mixed up the mechanics of his masterful movements.

According to the actor’s new memoir, No Time Like the Future: An Optimist Considers Mortality, “Tracy and I were…newly married with a young son. I had been experiencing muscle pain and a slight tremor in my finger, and on Tracy’s urging, I went to see a neurologist. After a cursory series of dexterity tests, he confidently diagnosed me with young onset Parkinson’s disease. I couldn’t process what he was saying; only snippets...I do recall him telling me that I might be able to work for ten more years. I was twenty-nine.”

The average age of outbreak is 58.

That disarming disclosure dumbfounded Fox. Fame had come at 21, kicked off a seven-year cycle of television stardom in the crowd-pleasing sitcom “Family Ties,” and propelled him to a variety of starring roles in movies that included the “Back to the Future” trilogy, “Bright Lights, Big City,” and “Casualties of War.”

Now, suddenly, the arc of his occupational orbit was disarrayed by doubt. Fox quit acting, indulged his anxiety, and amplified his appetite for alcohol into a pastime — until his wife intervened:

“Finally, after one particularly nasty night of drinking, I awoke to find Tracy standing over me as I slept on the couch, a spilled beer on the carpet next to my draping arm. She took in the scene and simply asked me, ‘Is this what you want?’”

Fox attended a 12-step program, engaged a Jungian psychiatrist, and re-entered show business without revealing his Parkinson’s. Eventually, he returned to television in “Spin City,” alerted the public about his medical condition, and remained with the popular prime-time program until 2002:

“One of my reasons for leaving Spin City was that I felt my face was no longer as expressive as I needed it to be. I had always liked being an actor that editors would cut to at any time for an appropriate reaction, my face always alive in a scene…Gradually, with the effects of Parkinson’s, my face began retreating to a passive, almost frozen disposition. It was blank, and I was hard-pressed to enliven it in any way that didn’t seem artificial.”

The trajectory of Parkinson’s practically ensures a certain rate of progressive deterioration; for Fox, specialists in neuro-movement, physical trainers, and other health professionals were engaged as his stiffness snowballed and flexibility fluttered. But, despite the difficulties, Fox believed that “optimism has always been the norm for me.”

There was some intermittent medical volatility during the 2000s, but acting opportunities continued to turn up. Fox appeared on “Scrubs,” and guest-starred in episodes of “Boston Legal,” “Rescue Me,” and “The Good Wife.” From that oeuvre, he garnered nine Emmy nominations and two wins.

Then, in 2018, he was informed of a dangerously positioned tumor in his spine:

“After remaining essentially static for years, things have taken a recent, ominous turn. Something has triggered an acceleration in the tumor’s growth…Now these doctors agree that the tumor should be removed….[Tracy and I] love our life, although after all these years with Parkinson’s…few things are predictable. It’s pretty clear now that this is more than just a pain in the ass; it is a tumor in my spine, and it’s got to go. Now, the question is: Who’s going to take it out, and when, and will they know what the hell they’re doing?”

The operation was performed — with good results — by a contingent of doctors at Johns Hopkins Hospital and was followed by two weeks of inpatient convalescence and a resumption of physical therapy in New York.

In 2000, just before the conclusion of “Spin City,” Fox founded the Michael J. Fox Foundation for Parkinson’s Research. During its first year, the organization geared up to present the initial round of grants. Now, 20 years later, it has funded approximately $1 billion in studies and investigations that have catapulted it to the largest nonprofit committed to Parkinson’s disease in the world.

Thirty years after his D-Day of diagnosis, Michael J. Fox has more physical restrictions, but “I find that I’m actually okay with using a wheelchair now. I see it not as a tyrant, but as a tool. I’ve managed to live my life without Parkinson’s defining me, so I’m no longer troubled by a simple chair with wheels…I’ve come to accept that I take a village. I’m part of the village, too; I contribute in every way I can, and try to be a solid citizen…”

And, he has emerged as an honorable one.

David Bruce Smith is the author of 13 books and founder of The Grateful American Foundation, which is celebrating its sixth year of restoring enthusiasm about American history for kids — and adults — through videos, podcasts, and interactive activities, and The Grateful American™ Book Prize for excellence in children’s historical fiction and nonfiction focused on the United States since the country’s founding. The recipient of the 2020 Grateful American™ Book Prize is Sharon Robinson, daughter of the late baseball great Jackie Robinson, for Child of the Dream: A Memoir of 1963.