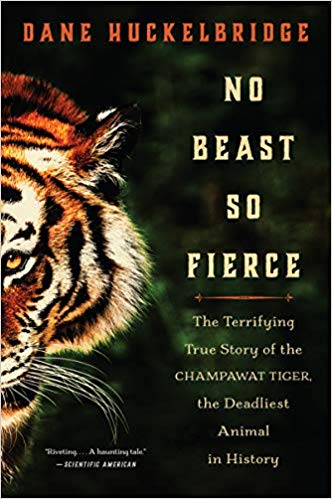 The year is 1907, the British rule India, and the Champawat tiger — so named for the remote locality it has terrorized for nearly a decade — has killed and eaten at least 436 people.

No Beast So Fierce is the compelling tale of the cat’s fateful collision with a lone human challenger, certainly a trope with archetypal roots. But unlike many of its fictional prototypes, it attempts to deal evenhandedly with the inevitable showdown, in effect telling both sides of the story.

That’s why this book succeeds. Author Dane Huckelbridge guides the reader through a wide-ranging excursion into history and jungle ecology. He also supplies rich detail on the social conditions informing the plight of tigers both then and now, and he colors in some chilling background concerning the formidable power of panthera tigris:

“A single blow from a Bengal tiger’s paw can crack the skull and break the neck of an Indian bison, and can decapitate a human. Aggressive tigers have been known to rip the bumpers off cars, tear outhouses to splinters, and burst through the walls of houses in search of food.”

But a seemingly invincible tiger can’t carry this saga by itself. As the tale bends toward a showdown, this story increasingly becomes that of its human protagonist.

He’s Jim Corbett, India-born and raised, third-generation Irish expat, one among 15 siblings, a railroad worker by trade. Corbett is an accomplished marksman and hunter. He’s also fluent in the regional language of the high Himalayan foothills where the problem tiger is continuing her deadly rampage.

Corbett has grown up in the wild, his mentors predominantly native. They have come of age, like Corbett himself, at the edges of the jungle. For them, the tiger is a solitary creature that largely avoids human contact.

Most have seen wild tigers only in fleeting glimpses, although this apex predator often weighs in at 400 pounds or more. In local lore, the tiger is the guardian spirit of wild places. Spotting one, however briefly, is a good omen, not a cause for terror.

What turns this solitary creature into a stalker of human prey? Huckelbridge offers a rich and compelling explanation here, weaving in natural and political history, jungle ecology, and a discussion of sound land management. Underlying all these factors, the author suggests, is the tendency of colonial regimes to subvert indigenous customs and values.

But a more immediate cause of the Champawat cat’s transformation is an injury inflicted by a would-be poacher. His errant shot has broken off several teeth, including one of the cat’s two canines, essential weapons in bringing down the massive ungulate prey on which the species normally depends.

Thus disabled and driven by hunger — as Huckelbridge retells the tale — the cat begins to snatch wood-gatherers, often women or children. For the tiger, there’s little downside in attacking a villager. In the aftermath of the “Great Mutiny” of 1857, native Indians have been forbidden to own firearms.

On the day of the showdown, Corbett heads off to meet and dispatch the beast. Here, the author’s approach is repeatedly marred by what reads like unearned speculation, e.g.:

“It was the sort of courage Corbett himself no doubt wished he could summon.”

“No doubt swallowing down a lump of fear, and perhaps some inklings of nausea too, Corbett raised his rifle…”

What’s more, as the author strives to make his story engaging, the narration occasionally lapses into the breathless and overwritten, even extending to imaginative excursions through the tiger’s consciousness. This comes off as a dose of Disney magic that this reader could have done without.

Ultimately, Corbett becomes the toast of British India and a hero to many in the native population. But he’s no enthusiast for the wanton persecution of big cats; in fact, later in life, he crusades for wild-tiger preservation.

Still, after Champawat, in the interest of saving human lives, Corbett becomes the go-to hunter in what turns out to be an epidemic of maneaters in the decades to follow. Once again, author Huckelbridge offers a convincing explanation of this surge in killer cats, citing shrinking jungle habitats and disappearing ungulate populations, among other factors.

Jim Corbett’s own book, Man-Eaters of Kumaon, published in 1944, was a smashing success, selling half-a-million copies in its first two years. It’s still in print today, more than a century after many of the events it describes. Corbett died in 1955, a celebrated maker of documentary nature films.