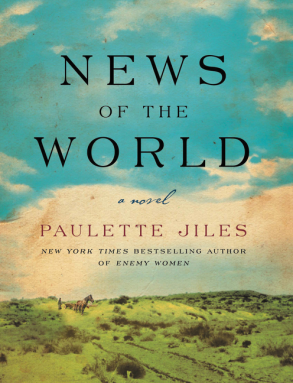 The captain — a veteran of two wars whose printing business has gone bust, whose wife has died, and whose daughters are grown and married — earns his living reading the world’s news to rapt audiences in the territories of North Texas. After a Wichita Falls reading, a free black man of the captain’s acquaintance offers him a $50 reward for the return of the rescued child to her only relatives some 400 miles away in Castroville, near San Antonio. Despite grave reservations, Kidd agrees to make the journey.

The girl, Johanna Leonberger, is sullen, prone to running away, and remembers nothing before her time with the Kiowa tribe. She mourns her Kiowa mother, her family, her nomadic life. The captain, while at times exasperated by his charge, is a tender-hearted man who does his best to protect her, understand her, and ease her painful transition back into the “civilized” world.

This enthralling quest pulls the reader in from the instant the pair takes off in an “excursion wagon, painted a dark and glossy green and in gold letters on the side, it said Curative Waters Sulphur Springs, Texas.” This “jaunty little vehicle,” the reader hopes, will have magical powers to protect the travelers as they pull away from Wichita Falls into unseen dangers.

The narrative is peppered with dry humor and infused with equal measures of morality and common sense. Over time, the captain and Johanna come to rely on and trust one another. At a crucial moment, the girl proves to be a fearless warrior. She’s also a chicken thief, resists wearing shoes, and will never fully regain a native speaker’s command of English. No matter. The bond that forms between the captain and his charge is deep and deeply affecting.

Jiles’ descriptive powers are as mighty as the land she paints. The author is an accomplished poet, as her lyrical language attests on every page. “They were lying among rocks and small spiny agarita; a lizard fled in a running of dark chevrons.” Or, “Above and behind them the Dipper turned on its great handle as if to pour night itself out onto the dreaming continent and each of its seven stars gleamed from between the fitful passing clouds.”

Historical novels often bury the reader in an avalanche of research that fails to move the story forward. Here, the details are rich and telling. We see the captain dressed for his readings in a “decent black frock coat, knee-length, single-breasted, a matching vest, a white shirt in silk and cotton figured with a lyre design in silk of the same color.” Foods, smells, characters encountered along the road, the uneasy towns with their fractious denizens, the unpredictable firearms — all have the feel of truth, of a time and place brought vividly to life.

The author, herself a rancher near San Antonio, has intimate knowledge of horses, giving her descriptions authenticity: “The noise of horses and mules eating, eating, their teeth like grindstones moving on one another and the occasional snort as hay dust got up their noses, the shifting of their great cannonball feet.”

Having survived floods, white slave traders, and Indian raids, the pair finally reaches Castroville, where Johanna is reunited with her aunt and uncle. Here the story lurches in an unexpected direction, the resolution of which will bring the reader to tears.

Some may find the lack of quotation marks in dialogue disconcerting, but generally the author avoids confusion as to who is speaking. And while dialect is often difficult to parse, Johanna’s struggles to master English — with her dropped R’s (missing from the Kiowa language) and other mispronunciations — are charming rather than off-putting. Close readers will also notice that the point of view at times floats away from Kidd to enter Johanna’s consciousness. In Jiles’ authoritative voice, however, these lapses enhance rather than detract from the story.

The only serious criticism of this lovely book is that the last chapter shifts into a rushed, let’s-get this-over-with narrative summary in which much of the action is happening somewhere offstage. The beauty of this novel, and much of its emotional power, comes from the writer’s masterful ability to build absorbing, dramatic scenes.

When the storytelling changes abruptly to exposition, the effect is jarring. Perhaps there was a deadline to meet. Perhaps the novel would have become too long and unwieldy had the final 10-page chapter been expanded. Still, it is only 209 pages long. In this day of 700-page doorstops, one wishes the author had gone on for at least a hundred more pages. But this is a small complaint. Not so bad to be left wanting more.

Ellen Boyers Kwatnoski is the author of a novel, Still Life with Aftershocks, which was a semi-finalist in the 2012 Amazon Breakthrough Novel Award Contest. When not working on a new novel, she blogs about art, design, and dance at http://ellenkwatnoski.com. She lives in Alexandria, VA, with her husband, son, and growing collection of mid-century ashtrays.